This week, I gave a tour to the direct descendant of John F. Oberlin: Anne Perru and her husband, Didier. I was nervous, of course. The only details about the Perrus: French, from Paris, and middle-aged. Possibly, they had never been to the US before.

In high school, my French teacher was a Parisian. Though an excellent teacher, she terrified me. A strict person, both in diction and behavior, she did not approve of my chronic lateness, imperfect accent, or adoration of comic books (I wrote an essay on the Sandman as an example of folklore).

In my head, I pictured giving a tour to a pair of irritated blonds, infuriated by my foolish blathering and my inability to discuss Oberlin achievements in conversational French. They would probably bolt from the tour, forcing Ben to fire me for insubordination to historic guests. From there, I would move to the Canada, shamed beyond measure, and wandering across the tundra until I was eaten by rabid bears.

I met the couple in archives, where I confessed I knew nothing about the Oberlin memorial, where we were doing a short photo op. In two seconds, one of the archivists grabbed a book on designs and explained it. The Oberlin Archives are really cool: they have letters from the Civil War, including two officers in the USCT. Oberlin is an incredibly historic place, so the archives has plenty of fascinating local information on abolition, racial justice, gender equality, as well as a ton of books completely unrelated to Oberlin. For History and Structure of the English Language, one of our assignments took us to archives, just to see what Old and Middle English scripts looked like. In my Hebrew Bible class, an archivist brought in objects over a thousand years old.

As a history nerd, I explode with glee every time a librarian puts on gloves to look over a text.

The Perrus sat at a table, looking over super-historic documents. I stared at them for a minute. They didn't look terrifying. Then, they shook my hand, smiling. I sighed with relief. 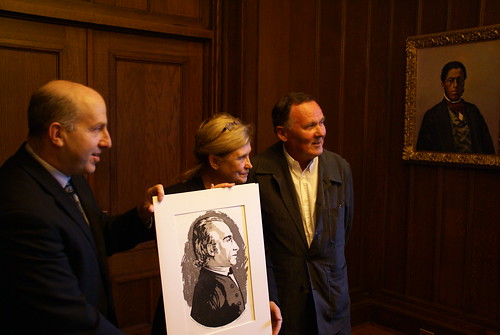 The Perrus with Marvin Krislov.

Oberlin students don't know much about John Frederic Oberlin. Even his name is perplexing: we call him John Frederic, but he's also Jean-Frédéric or Johann Friedrich. I'm going to call him JFO for simplicity's sake.

Our confusion is understandable: JFO never saw Oberlin College: he died before it was founded. On tours, I don't discuss the ethics of JFO, and how he impacted John and Philo, Oberlin College's founders. That said, I think I should. JFO was a cool guy. He was very "Oberlin," linking social justice into his role as pastor. In his parish, he built bridges, taught agriculture, founded schools and libraries. Given how Obies work in terms of ecological design and environmental and educational progress... JFO would probably like Oberlin.

On some tours, I do tell an Oberlin founding story, involving bears and Heavenly Signs.
In my mind's eye, this story takes place in the dead center of Tappan Square, where I told it to the Perrus.

Small tours are different from big tours - I cater towards different interests. In this case, we spent more time outdoors, as the Perrus loved the trees in Tappan, venturing guesses as to what each kind was. We snuck into Hall Auditorium where they mentioned their son was a sound engineer, seeing the paint dry on a new set. They both loved music: jazz for him, classical for her. We spent a while in the Conservatory.

Though there was a language barrier, I think I discussed the uniqueness of the college while still being mildly entertaining. The Perrus reminded me of my own parents, smiling and laughing easily, occasionally mock-bickering in French. It was such a pleasure to meet them. Philo nodded, chewing on his tuna sandwich, brushing the crumbs onto the forest floor.

John continued, "So often they turn out peculiar, but I have faith in us."

"I hear in Oneida, each man has seven brides, all children." Philo said. He adjusted his glasses; speaking of child-brides warped his frames.

Philo fished an ant off of their blanket, letting it walk across his palm for a minute. While John wrestled with big ideas, Philo tended towards more earthly issues: accounting, carpentry and gardening.

"That might be too expensive," Philo added. "Why not here? No one has claimed this township."

"This area is cheap, but far too swamp-like to support enlightened children. Without a godly spot, the college will fail. We must find a place like Alsace in its beauty, able to attract students great and far." John's sonorous voice always comforted Philo, even when he disagreed. They had been exploring the back-country of Ohio for weeks, searching out the spot to base their college. Their boots reeked, muddy and sweaty, and though they had just found a lake the day before, Philo already smelt the stink that had nestled into his body.

"Do you think people will confuse Oberlin with Oneida?" wondered Philo. "The names are familiar."

"I hope not," John said as he munched on an apple. "That would be sorrowful."

A strange noise perked their ears, a low growl spreading from the trees. In the trees, the birds flew away, the squirrels bolting for distant branches. John inched closer to Philo. Philo found his breath strained. The ants were gone now. The brush before the woods parted slowly.

A bear. It stood thirty feet high, with gigantic ivory claws. A stream of drool ran from the bear's mouth, its maw opened, teeth jutting from each angle. Steam puffed out from the bear's nose, lined with putrefied snot. The bear's coat was rust-colored, matted with bits of fur and bone from smaller creatures.

The bear lumbered towards them, its body shaking the ground. A few feet from the picnic blanket, the bear screamed. The incredible roar echoed for miles around, terrifying children and other small animals.

"Leave this place," Philo commanded, waving a loaf of bread as a scepter.

The bear paused and jostled its weight around. Eyes glowing red, it eyed Philo. Steam from the bear's nostrils singed Philo's eyebrows. His glasses fogged, rendering the bear a darkened smudge.

"Begone!" Philo screamed, realizing how close the bear's claws were.

With a final huff, the bear turned from the humble picnic and lumbered back into the woods. Philo stood for another moment before his knees collapsed.

John cleared his throat. "I think we should build Oberlin here."

Note: Preceding story is questionable in truth. Except for the bear. The bear is real.

Anne and Didier Perru's visit prompted the Oberlin College Archives to produce a new media presentation on John Frederick Oberlin and the connections between the man and Oberlin College and its community. It was developed out of the exhibit of archival material for the Perrus in September, and expanded with video interviews with Paul Arnold, Emeritus Professor of Art, who designed the John Frederick Oberlin monument on campus. Please visit our multimedia presentation at http://www.oberlin.edu/archive/oberlins_namesake/.

Why I’m Proud To Be An Obie

It’s no secret that the alumni who work in admissions love Oberlin. And there’s lots to love!