Hey thrashers! It's totally rad to be going back to school, huh? Totally. Oberlin's chill, you know. Chill-city. Chill to the bone. Seen that new girl in town? Cutie-pie. I'd like to have a slice of that cutie pie, huh? Yeah. Dope. 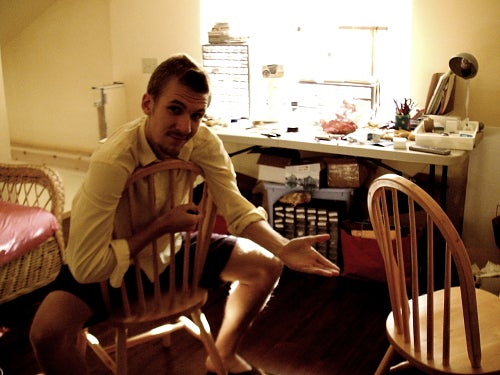 Yeah. This will be cool.

Instead, let's talk about something else. Any ideas?

I think I was concerned about roommates more than anything before I came to college. I got my roommate assignment about this time two years ago, and immediately found my new best friend on Facebook and emailed him, letting him know that I didn't have a mini fridge but would be happy to bring a microwave to school and what do you think we should do for window treatments? I didn't know that my roommate was living in Russia and not really into the whole 'internet' thing at the time, so I never heard back from him. I freaked out a little. Everything turned out okay. Some people have stories of getting paired up with roommates that are way too smelly, noisy, and/or sex-y (that's roommates that have a lot of sex in your room, not necessarily ones that are too sexy). BUT we're not going to talk about sex here, since I am, in fact, very good at it and those who have been paying attention will recall that you don't talk about it if you are all about it. There are also stories about seemingly random roommates that become lifelong friends, become bridesmaids and best men at each other's weddings, and generally make me ill from cute overload. There are more of the 'best friend' kind of stories than the 'didn't shower second semester' stories, if my friends are any indication. My freshman year fell in the middle of these, as I imagine most do. My roommate and I kept very different schedules, so I would leave the room to go to class while he was still asleep, then come back in the afternoon when he had just left to go to class. We talked every day, but it was usually housekeeping stuff, asking if one of us could open a window or when we would get back later. The problem with not getting familiar with a roommate is that you never get past the initial first-month-walking-on-eggshells period where you're afraid to make any noise when you wake up and smell like people were meant to smell.

After self-consciously holding my bodily emissions until two months into the second semester, he just stopped coming back to the room at nights. I saw him walking hand in hand with a girl after lunch one day and realized, tearfully, that my roomie would not be coming back. He was having too much sex.

I, on the other hand, was not. As a result I had a double dorm room entirely to myself for a month or two, which was nice. I wore sleigh bells around my neck all the time, just because I didn't have to worry about waking anybody up. And you should have smelled the place! I do value the time I spent with my Russian roomie, but I like living by myself, having real privacy and real quiet when you want it. So I chose to live in a single last year and next. For me, it's perfect to be in a dorm full of people you can see and talk to whenever you want, but still be able to go to your own room when you feel like it. Me and my freshman year roommate still see each other and talk every now and then. We probably won't visit each other every Christmas when we get older, but we can certainly kill an hour or two chewing the fat, talking about sex or whatever.

But we wouldn't. Because we're a couple of stallions.

There is so much to love about this entry. "Not no never." "Sex good about it feels talk about it." The sexy picture.

I believe Genny said it all.

Great entry, Joe. My Oberlin roommate is now the godfather of my children and I was the best man at his wedding. It's been 14 years since we graduated and we have never lived less than 700 miles apart, but we still see each other at least four times a year. He can still kick my butt in golf but I'm working on that.

Despite this gravitation towards "cute overload," as you rightfully call it, I will conclude with this thought: THANK GOD we had a divided double because he had this robe that he wore a lot and never washed, like ever, like ever ever, and I'll just end there.

I love you Tom. But I really don't miss that robe.