In my mind, Kulas Recital Hall will first and foremost always be the place where I took Music History 101. I took it my first semester of my first year of college– it was my favorite class then, and looking back now, it’s still one of the best classes I’ve ever taken. 11:00am Monday through Thursday, 70 other students and I would hunker down in squishy red chairs to listen to a brilliant lecturer talk about Gregorian Chant, Beethoven, and Beyonce for an hour. Kulas Recital Hall was a happy place for me that first semester, and two years later, it still has the special spot in my memory as where my college experience began.

Flash forward to now, and a couple things have changed. I don’t spend an hour a day four days a week in Kulas. Now Music History 101 is taught in a Bibbins classroom, I’m a lab assistant for the class instead of a student, and I haven’t taken any other classes in Kulas. I’ve reached my third year of college, and now the space Kulas Recital Hall takes up in my brain is as the place where I did my junior recital.

Instrumental majors are required to do a junior and senior recital at some point throughout their third and fourth years, sometimes later if double-degree duties call. I decided almost a year in advance that I was going to do my junior recital in the fall– 7:30pm on October 11th in Kulas Recital Hall, to be exact. I decided to do a fall recital under the logic that I could spend the summer preparing before I came back to school. Degree recitals take a long time to prepare for, and are really a big deal– oftentimes it’s a student’s first opportunity to play solo repertoire in front of an audience. All of my concerts my first two years were chamber music or in an orchestra, which is a common phenomenon, and made me all the more excited to do my junior recital.

It’s a strange feeling to have the thing you’ve been planning for so long finally happen. I had the date set since May, the music picked since June, and the notes under my fingers since August, but that did nothing to convince my nervous/excited subconscious that I was ready to put on a recital. The few weeks leading up to October 11th were basically me alternating between overwhelming confidence and utter despair every few days, to put it at an extreme. It was hard to trust that I was adequately prepared, even though I was; it was much easier to believe that I would mess things up, because it’s easier to fulfill an expectation of disappointment than have my hopes of success fall short. As hard and as much as I’ve worked on my recital over the summer and in early fall, it all culminated into about one hour of time. It’s not like a blog post that I can add to and edit for weeks before putting on the internet for the world to see– there are no redos.

The week before my recital, when I was feeling particularly down, I made a list of all the reasons my recital was going to be great. I did this partially as a confidence booster, and partially as a way to remind myself that I didn’t need a hundred disaster-preparedness plans. I was prepared, I looked amazing, I had the opportunity to play music that I’ve come to love for an audience, and there were so many people who wanted to support me coming to my recital. While I wish I didn’t have to make a list with a pen and paper to remind myself of what confidence felt like, it certainly did help.

There are basically two things related to my recital that were out of my control: how the other people on my recital played and technical difficulties. My recital experienced some technical difficulties. The livestream did not work. I had been waiting almost a year for 7:30pm on Friday, October 11th, and when it finally arrived, I was waiting backstage, clicking the refresh button on the livestream every few seconds, hoping that it would start so everyone watching from afar could hear me play. At 7:38pm it still wasn’t working, and I was still sitting backstage, progressively getting more anxious about my 92-year-old grandmother in Illinois and one of my high school band directors in Michigan not being able to hear me play.

But I couldn’t wait forever, so I went out on that stage. I played my sonata, my theme and variations piece, and my wind quintet. I had a bit of a rough start because I was a little bummed about the livestream, but I recovered quickly, and the livestream actually started working a few minutes after I started playing.

If you ask any middle school band director, they’ll tell you that if you’re going to make a mistake, you should make it loud and proud, and at a few moments during my recital, that’s exactly what I did. My recital wasn’t perfect, but then, no one’s ever is. Months ago, when I was picking the repertoire I wanted to play on my recital, there were some things I was hesitant to program because they were technically challenging, but I did, and I’m really glad with how things ended up. Even though there were times when I felt doubtful, my recital was one of the times in my life where I just had to go for it, and trust that my hard work would pay off.

Kulas Recital Hall has changed a lot of things for me. In my first semester, it taught me that I love music history, and helped me decide to declare a musicology major. This year, it gave me confidence in my ability as a performer, and taught me to trust myself more. I did my best on this project, I’m proud of myself, and now it’s time to move onto other things. 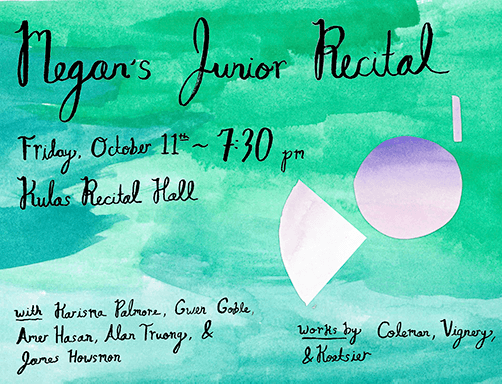 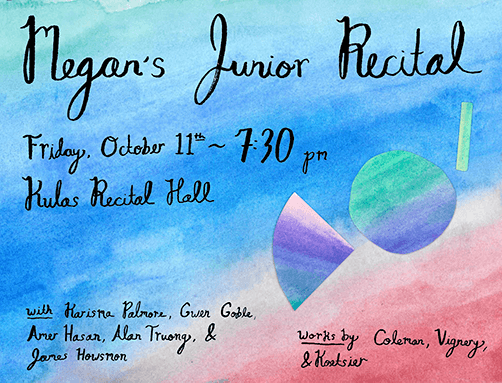 Posters made by my brilliant and talented friend Lily Judge.