Considering I declared my German Studies major my second week on campus and have been an active member of the department ever since, it's slightly unforgivable that I haven't written anything about it yet. So here I am, because, hey, what better time to talk about my first major than when I am in the process of declaring a second one? (More on that in a later post. For now, German.)

Why did I declare?

Superficially: German was my first language, so the major is not (as) hard for me - and I need constant practice with German in order to counteract the erosion of my fluency, so I'd be taking the classes anyway. Might as well get credit.

More honestly: my adolescent life has been spent in the liminal place of not having the solidity of a fatherland to fall back on because of my split heritage - I even have dual citizenship - so I constantly hunger for insights into the culture that is a part of me even though I have never been a part of it. My theory has been that if I understand my history, I will perhaps understand myself more. To an extent, this is turning out to be the case?

My German Studies major, at any rate, is an entirely personal affair. I do not love Germany for its own sake; this is all about me. And I totally didn't realize it until I wrote that sentence, but it's the truth, and, what's more, it has been working out quite nicely.

There are three main reasons I remain happy with my snap choice of first major: the classes, the profs, and the opportunities, in no particular order. I say opportunities mainly because as soon as I declared, the department got me three jobs in quick succession (all of them in a tutoring capacity) and has since guided and supported me in almost all of my life choices1. I wasn't expecting affiliating myself with a department to come with such immediate benefits, but I suppose it makes sense that the earlier people get to know you, the more they can recommend you and recommend things to you. In fact, most of the German faculty seemed to know me even before I knew them; my reputation has preceded me to every one of my German classes since my first one. (Still not sure how me and my shy self feel about that. Honored, probably.)

This should go without saying, but these professors who have been helping me navigate my Oberlin life are just as adept in the classroom as they are outside of it. Every one of my German classes has been a joy so far, and the more discussion-based the class has been, the more I've enjoyed it. Which is a testament not only to the profs but also to the students; sure, we wouldn't've produced the mad insightful discussions we did without some good facilitation, but it was, in the end, us who produced them. My classmates are some of the hardest thinkers I've had the privilege to converse with. Not seldom have I left class rethinking my views because of a debate about centuries-old, foreign literature - and that quality of perpetual relevance is something I find endlessly exciting about my course material. I'm proud to be part of a department that reliably offers me such excitement.

Truly, the higher-level courses are, without exception, stellar, but I'm going to highlight a particular kind of German course here: the writer-in-residence class that happens every fall semester. I haven't heard of any other department doing this, but I think it's possibly the most valuable resource we can offer. Can you imagine reading a powerful book that could fuel scores of fruitful discussions, and then getting the chance to have those discussions be facilitated by the author of said book? It's an incredible experience.

Last term's writer, Susanne Schädlich2, is the daughter of a prominent German author who (like most German intellectuals at the time) got entangled in East-West politics after the second World War. Thanks to his fame, he and his family were able to escape to West Germany when Schädlich was a little girl, and she has spent the rest of her life working through and writing about the emotional fallout, both in her own life and among German children of that era who grew up in a catastrophically fragmented homeland - something which resonated with me very much. Because the texts she was allowing us to treat as literary were actually very personal, we were encouraged to dig deep and respond in kind, which fostered a level of emotional engagement with the material that I've never seen a class exhibit. Returning to my earlier point about the selfishness of this major: hers is the course that most clarified modern German thought for me (and thus also helped tease apart which bits of my thinking are most German), and in the process let me deal with my own fragmented heritage.

To make a long story short, anyone who is eligible to do so must take one of these writer-in-residence courses. They are unspeakably valuable.

So. I've taken five German courses in my four terms here, and I basically have one class to go before I complete the major. (German Studies requires two more classes from outside the department, but I'll fulfill those by cross-counting classes from my soon-to-be second major.) I'm pleased by the stability the department has provided me, and thankful for its help. My freshman self chose well. 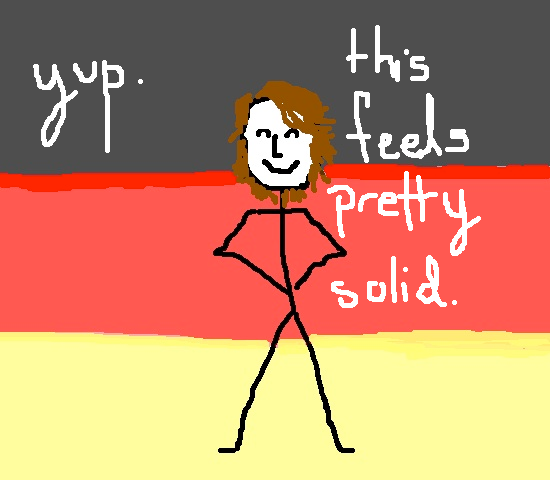 1. What courses to take; whether or not to study abroad and where; how to structure my Winter Terms; how to think about constructing my schedule; how to figure out what to do with the rest of my life; pros and cons of a second major; applying to scholarships and grants; finding balance and, relatedly, being able to say no; the worth of studying literature. The list goes on. No joke, I go to them for help with everything. Speaking from personal experience, the German department consists entirely of fascinating, intelligent, and dangerously encouraging people.

2. If you like, read this short interview with Schädlich. Maybe I see it because I know her, but I think her immense courage shows through in those brief responses.

It's awesome to hear about how you are taking advantage of what Oberlin has to offer and learning so much. I am excited to hear more about your second major also (future blog post! Yay!)

Experiencing "joy", discovering "perpetual relevance" in literature, emotionally "engaging" in your study environment, "clarifying modern German thought" and "teasing apart bits of thinking" from the clump that we call self - not at all bad for just 2 years of college! I hope your educators wear a silly grin on their faces.

On second thought, you make it sound like only the German Dept. among the languages offers a writer-in-residence program. Why would they be the only ones? Shouldn't it be equally possible for the others to offer it?
I searched Oberlin online and indeed found no such thing for any of the other languages. Remarkable!

Writer-in-residence courses!! Yet another reason why I'm so disappointed in myself for not tackling another language while I was at Oberlin.

You know, I haven't heard of any other languages having writers in residence. It's possible that they exist? But I just did a quick search of next year's course catalog, and the only writer in residence seminar, it looks like, is the usual German one - so if others exist, they hide well. (Also, I happen to know that the German department can do this sort of stuff because they're super awesome and get money from the Max Kade foundation to keep this program going, so it might be the case that there isn't money like that available for the other languages. I really don't have experience with the other languages here, so I couldn't say.)