So you've decided to stay in Oberlin for Winter Term for one of the following reasons:

a. You like snow,
b. You like campus when it's very empty, or with just your friends on it,
c. You want to escape your family,
d. A really awesome Winter Term project is available to you in Oberlin,
e. You have a house and are already paying rent so why not be at home (for select seniors only).

Oh no! I have to eat all month while I'm (playing in the snow) (wandering around campus alone or with friends, but definitely without your family) (doing an awesome project) (living). What do I do?

There are three options:

- CDS has a pay-per-meal dining plan. CDS is passable during the year, but during Winter Term, it's a desolate wasteland. The draw I have towards CDS is socialization with friends, and it's not as fun during Winter Term.

- Do your own thing. This means you can eat ramen for a month, or...

My first year, I cooked occasionally with some friends, but I was eating very basic food, keeping most of my purchases (which I had walked about a half mile with to my dorm from the now-extinct Misslers') in my roommate's minifridge. I ate salad and pasta and I made bread once a week for simple cheese or peanut butter sandwiches. I could have eaten in Harkness, which was open for Winter Term that year, but I was doing the docent training class at the Allen Art Museum, which met during the lunch meal and through the preparation of dinner. I wouldn't have been able to complete my hours or eat half the meals I had paid for. So, I was the Lone Ranger, who made pizza with friends on Friday and shared in a pasta dinner on Sundays.

My sophomore year, plans got more elaborate. My intro Anthropology class my freshman year required a fieldwork assignment, observing a place we hadn't spent time in to do a small research paper. My professor had found out about the West Side Market, one of the oldest indoor marketplaces in the U.S., and said she would take the first four people who contacted her to Cleveland. Of course I went, and of course it was incredible. It's enormous and full of all these local vendors and it's so cheap. I took a bunch of photos and wrote a winning paper, but the main gain from that visit was learning about the treasure chest that is the West Side Market. 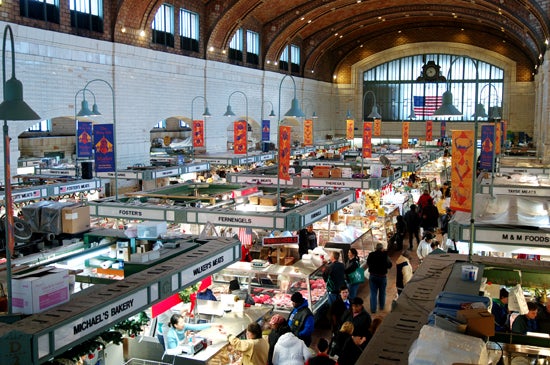 The West Side Market, from the upper-level viewing spot. It looks like Grand Central Station.

My plans for sophomore year Winter Term was to have a small four-person group, cooking together and shopping together weekly at the West Side Market and Trader Joe's. Four went to five went to seven went to nine regular members, which I decided hit a maximum of easily doing group cooking and not spending an inordinate amount of money. We planned meals together, did shopping together during the weekend, and cooked absolutely fabulous meals, with ridiculously classy meals on Saturday nights. I dubbed us the Harkness Foodship (usually shortened to the Hark Foodship, or just the Foodship), a bastardization of the Tolkien fellowship. 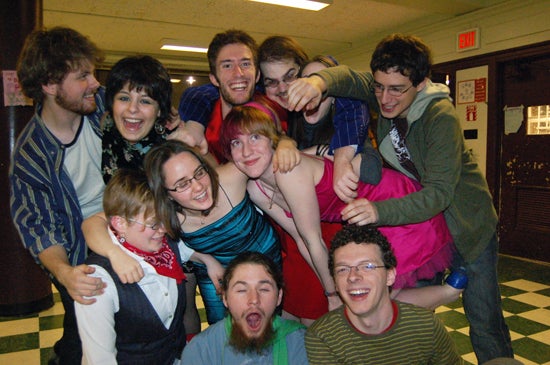 This is the first Foodship. Aren't we classy?

My junior year I spent with the Story Pirates in New York, and I lived with my grandmother, who is delightful, aged like a good cheese, young at heart, and my size. We would buy things together and I would whip up classy meals in her postage-stamp-sized kitchen. We still pasta-ed it up every so often, but with the addition of things like white wine and mushrooms and several cheeses, it was a meal to behold.

Some old timers in Oberlin from the first Foodship revamped the group into the Foodship II, Electric Boogaloo. They still planned meals, cooked and shopped together, and did classy meals like no other. Luckily, I got to hear about their exploits over the phone and through email, and I joined them for the last four days of the month. Delicious as usual.

All these fabulous Winter Terms were well fed, but the projects always came first, food came second. So this year, with my unofficial Winter Term project as my official senior project, it just so happened to do with my favorite things, the things I usually have to do in my spare time. Instead of having them be what I do when I need to or when I'm exhausted, I can instead focus all my energy on the things I love.

This year, I'm working on my senior stop-motion cinema project, so I'm painstakingly cutting up vegetables to make soup. This first week I planned my soups, and then planned a menu around them.

Is this project a cop-out? Nah, I don't think so. It means that I'm experimenting and inviting over friends constantly, as well as eating extremely well. I haven't resorted to ramen once (yet, but honestly, I love ramen, so I'm trying to distract myself from that. I can make a glorious meal out of ramen) or spaghetti (though I might do it next week, because I love pasta with sauce, but I might make fresh tomato sauce and make some Italian meatballs on the side).

Dear parents, I'm not getting fat and I'm not going on a diet. Truth be told, I'm probably eating healthier this month than I do during the school year. I am making bread every few days, eating lots of delicious veggies, and anytime Daniel bakes something good, we're sharing it with friendly visiting masses.

What have we made so far? Photo time! 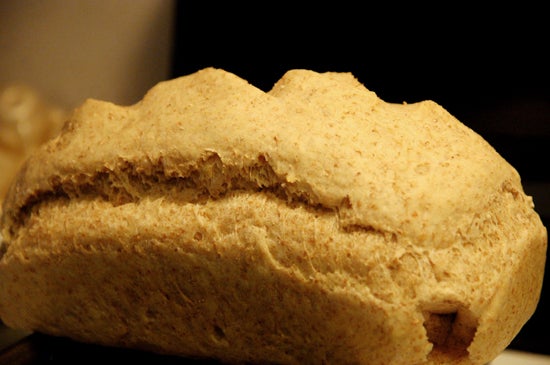 This bread is purely for my parents... look at that gorgeous loaf of bread! 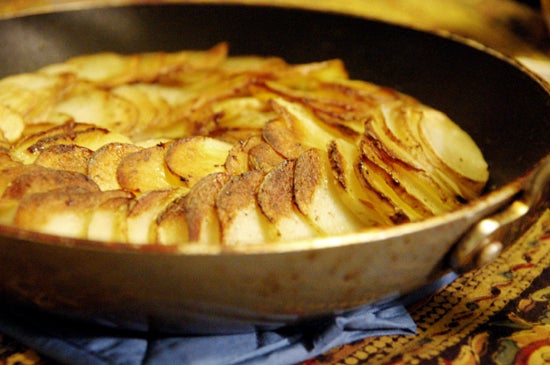 Potato galette, a French potato pancake, as part of my first meal back at Oberhome. 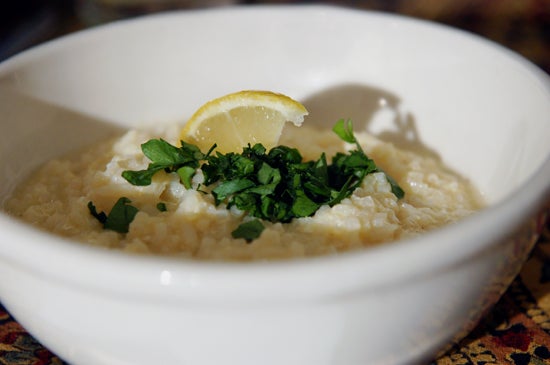 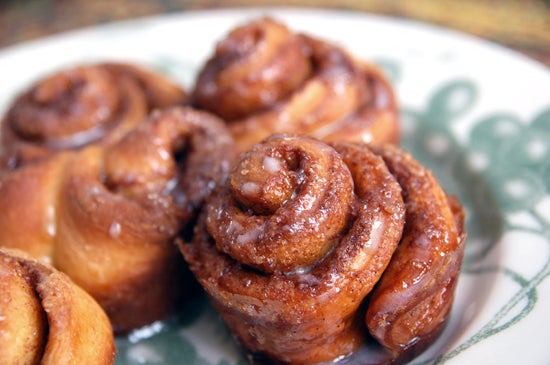 One morning, I woke up to these cinnamon rolls. Thank you for the dough, Katie! 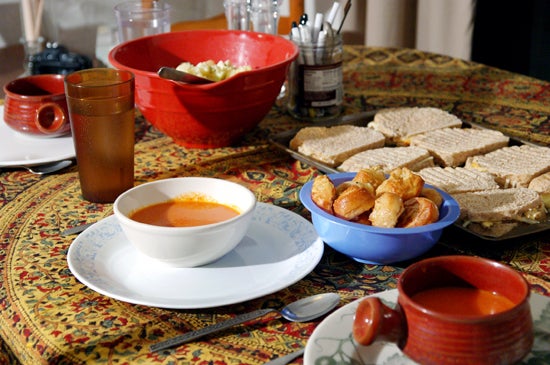 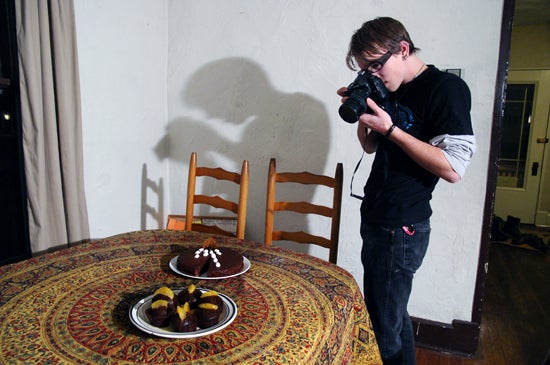 Daniel paparazzi-ing his root beer cake with sour cream chocolate frosting and my vegan chocolate orange cupcakes. This is what we do for fun.
**

More photos and full rundowns of the meals are at my foodblog. Read and drool.

I loved this entry. I really need to stop by and eat/cook with you. Everything looks so tasty.

Please please please do. You should also either come with us to West Side Market or send a shopping list with us!

I am sad because you used the foodship picture where Jake is covering my face. :[

I need to come over and cook with you at some point. I miss you!

This post is incredible! Ah! The food photos are amazing. I have the hardest time with food photos! Teach me your ways Ma'ayan....

One: natural light is your friend. Don't be afraid to shift your plate to get better lighting.

Two: I've gotten better at photographing food just by doing it more and more. Look for textures, patterns, and a combination of the foods with the surroundings.

Three: Plate it accordingly. Make it look natural but delicious. Don't poke it too much, but also if it looks like mush/brown, figure out a way to make it more interesting -- a garnish works, but consider arranging a fork/spoonful to separate mush from more mush -- and consider an interesting plate or background or raw ingredients along with cooked foods makes food photos more nommy.

Four: Take more photos. (Of course.) You'll get better at it. Look at a million food blogs and see what you like and try to imitate it.