I love Stevenson. I've loved Stevenson for years. It is, in fact, on my list of favorite things in Oberlin, which proves that I love it officially. I'm going to miss the crap out of Stevie when I've graduated. You don't even have to decide what you want to have for lunch, you just wander around until your stomach sees something it likes and says "gimme that!" You have to cook in the real world. Cooking for yourself can be kind of homey, but other people cooking for you? That's like what happens with royalty.

There are, of course, those days. Those days when there's no shortage of food, but there is an acute ennui with the food that's being served. Sure, they change the menus in Stevie every day and there are 5 counters to get hot food, a salad bar, a cold cut station, cereal, fruit, desserts, ice cream, and frozen yogurt, but there are days when you look around and just have to say "GOSH! There's NOTHING to eat here." Suffer no more, help is nigh. Raw materials for making your own food abound in Stevie. Sort of poops on the idea of being royalty, but you can live like the other half for a day.

Ready to roll up your sleeves and kind of cook your own meal? For an appetizer, I would suggest something potato-based. Tater tots are pretty good on their own, but if you dump a ton of Caribbean Jerk seasoning (available at the spice rack) onto them, they're even better. Similarly, powder your fries with Old Bay seasoning for a dish I like to call "Who Let the Fries Out?" Seasoning powder + something potato-based (did someone say potato paste? Dee-lish) = new twist on something potato-based. Alternately, you can construct the Justin Warner special, the Surprise Salad. Justin was a senior last year, a history major interested in studying both alcohol culture in colonial New England and alcohol generally in Oberlin. Justin was huge, about 6'3", a cross country runner who put on 25 pounds one summer without noticing a thing. Every meal at Stevenson for him included one of his Surprise Salads. Under a bed of spinach, innocently disguised as a simple salad, was a full plate of pasta. The surprise was in the fact that, while Justin appeared to only be having a salad on the side with his two other plates of food, he was actually eating three meals in one sitting.

For an entrée I suggest a sandwich. To make "The Executive," take a veggie burger and stuff it, along with some lettuce, cheese, and hummus (There are more than a dozen acceptable spellings for hummus, including: h-o-m-m-o-s, h-u-m-m-o-u-s, h-u-m-e-r-u-s, and h-o-m-u-n-c-u-l-u-s) into some pocket bread. Take your sandwich and stick it where the sun don't shine (the beautiful sandwich press, which grills sandwiches to warm, melty, occasionally charred perfection), and chow down. The hot dog bagel (the "You Make Me Feel Like a Natural Bagel") is an old favorite of my girlfriend (and grill-friend) Liz. The hot dog bagel always sounded a little weird to me, but I'll include it here for the adventurous. Toast a whole wheat bagel. Take one of the hot dogs from the grill, cut it into disks, and arrange the disks on one side of the cut bagel. Slather the other side with chipotle mayo, add cheddar cheese, spinach, and some smushed-up black beans, and shove it in your hole. 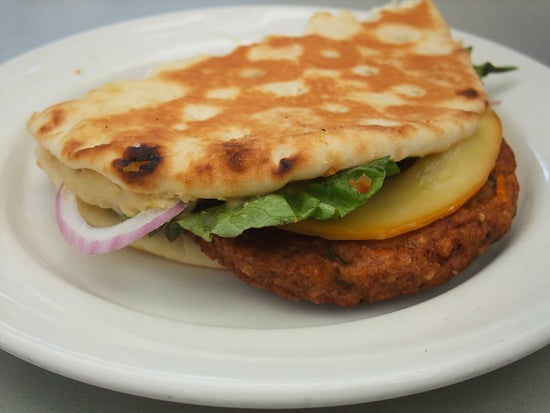 Or shove this in your hole. The Executive

To make the "Patty Sang Bass" patty melt, take a grilled cheese sandwich, peel it apart and stick a hamburger patty in the middle. The sandwich press makes it possible to make any type of cheese in the cold cuts bar "sing bass," as well.

Another lovely lunch/dinner entree option is off-menu macaroni and cheese. Macaroni and cheese is offered at lunch every Tuesday, but you can have it whenever you want it if you're willing to work for it. Lovingly called the "Oooh I Bet You're Wondering How I Knew, About Your Plans to Make Macaroni and Cheese When It Wasn't on the Lunch Menu," macaroni and cheese is simple enough: pasta from the pasta bar, shredded cheese from the salad bar, a little butter, and 15 seconds in the microwave.

I tend to expend most of my creative energy thinking up sweet treats with which to end the meal. Occasionally referred to as "You Wanna Be Sloppy For the Rest of Your Life," the ice cream sandwich can be a challenge to eat without getting your fingers sticky. Take two cookies, put a big scoop of ice cream in the middle, and be ready for it to all smush out the sides when you take the first bite. 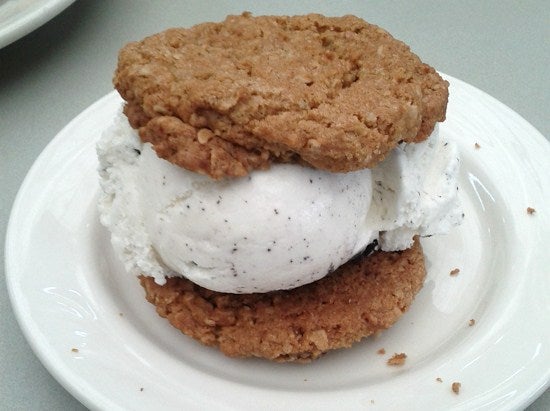 This will blow your mind--cookies (on the outside) and cream (in the middle). What flavor ice cream did I use? COOKIES & CREAM!!! A SANDWICH THAT REFLECTS IN ON ITSELF! A RECURSIVE SANDWICH!

A few more ideas: Pie gains an air of sophistication from a trip around the microwave. A lovely variation on the traditional root beer float is the dreamsicle float, vanilla frozen yogurt with orange soda. 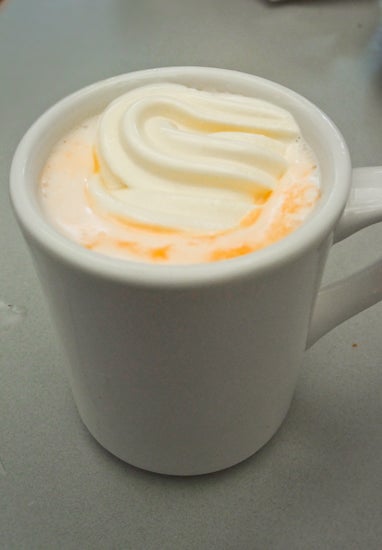 Anyone care for a frozen dream?

The "Connecticut Dandy" is a yogurt parfait: 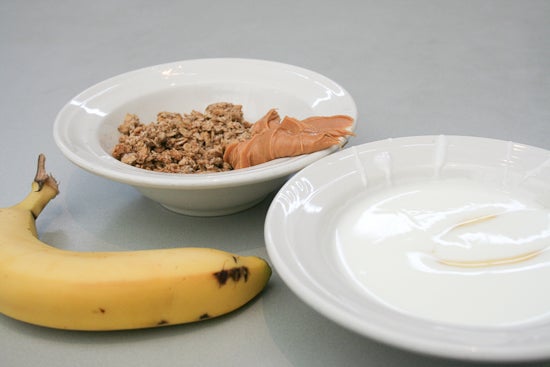 The start of something good.

Mix plain yogurt, honey, bananas, and granola for an amalgam to write home about. 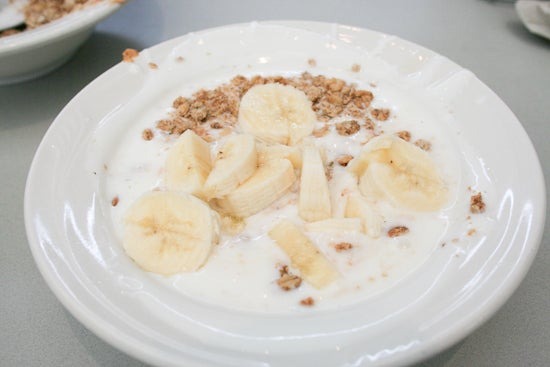 The cinnamon apple wrap ("Lynyrd Cinnyrd's Sweet Home Apple-Wrap-a") is another sweet treat to end your meal (or start your pie-ice cream-cake dessert spiral). Apples, diced as well as the butter knives will let you, on top of peanut butter, sprinkled with cinnamon sugar, in a wrap from the sandwich bar. Finally, you can make your own milkshake by combining ice cream and (wait for it...) milk in a cup then mashing the crap out of all of it. Add some peanut butter for the "I Like Pea-Nuts and I Cannot Lie" shake.

It would be irresponsible of me not to mention the other uses for Stevie food--they make decent musical instruments, if you limit yourself to percussion--the drum is the table and your drumsticks are bananas. Wash your hands after you're done and avert the angry stares from the clean-up crew. One day, our table found that there is a veritable workshop in Stevenson and hatched a brilliant scheme. We hollowed out a banana, removing the 'meat' through a small opening near the top; filled the banana with hummus, pesto, and sprinkles; and sealed the whole thing together with a small amount of honey. Our perfect banana simulacrum was foisted upon Stephen, a tall, dark, handsome runner who looked at it incredulously and went back to his conversation. We hadn't fooled him. Eventually, we dropped the banana from a high place and it made a very satisfying splat when it became clear that nobody was going to eat it. 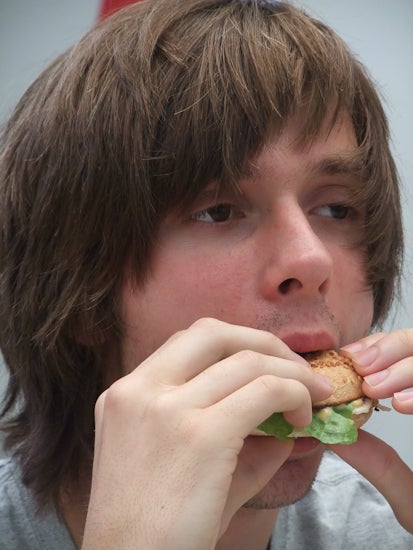 Matt 'Schmatt' Jefferis eating a concoction of his own, a toasted pesto bagelwich. Keep this image in your heart.

I am so hungry now. I totally made my own egg salad when I didn't want polenta or how-can-you-ruin-pizza-this-is-so-goddamned-bad...hard boileds from the salad bar, mayo and mustard from the cold cuts area. Hot damn.

Also I love your names. You funny lady!

As weird as it sounds, I sort of miss my one-Stevie-meal-a-week from my student years. The panini press made everything better. Everything, I tell you.

I just remembered that "you make me feel like a natural (hotdog) bagel" (known in some circles, as simply a "hotdog bagel") had another variation. When chipotle mayo was out... I would switch to a mixture of plain mayo, red pepper flakes, and heinz 57 sauce. It was pretty bozzz. Just figured I'd throw that out there in case anyone wanted to try it ;)

Super important question coming your way! If I choose to eat at a co-op(I'll be a freshman this fall), can I still go to 4th meal and stuff at the dining halls???

Cara-
Sorry it took so long to get back. Yes, you can go to 4th meal, you may have to charge it to your student account or pay with Obie Dollars since co-opers usually only have one CDS meal/week.