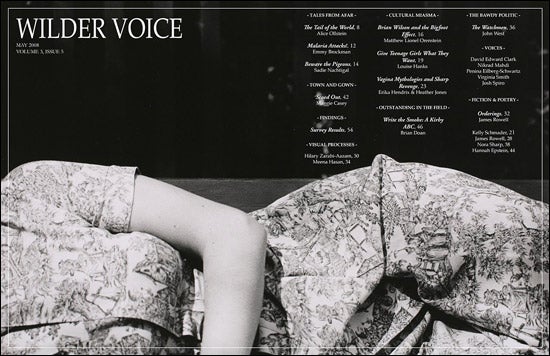 There's something to be said for a small liberal-arts college in a backwater hamlet a charming slice of small-town America that has two newspapers. And there's something more to be said a college that has two newspapers (The Oberlin Review, The Oberlin Grape--for which I am a copy editor), three non-fiction magazines (Wilder Voice, Vox, In Solidarity), a literary journal (formerly The Plum Creek Review, formerly Enchiridion, now The Plum Creek Review--again), a genre-fiction magazine (Spiral) and doesn't have a journalism department.

Also, I'm absolutely certain I'm forgetting some of them. (For example, I think OSCA--the Oberlin College Cooperative Association--prints a magazine, but, as I don't live in a coop, I don't get a chance to read it all that often)

It's a little weird, I think, that we have so many student publications and so few classes dedicated to journalism. Of course, we have The Rhetoric and Composition Department, whose portfolio is as vague as its name suggests. It does offer a few journalism classes, but you can't major in it, and there's no plotted-out concentration for it.

We are, in short, a journalism-obsessed campus with no journalism majors.

There is, of course, another way of looking at this situation. From a glass-half-full perspective (a perspective no doubt appreciated by my Communications Department masters), the vibrant and flourishing journalism scene--in spite of a serious department--is a testament to both the strength of the writing here at Oberlin and our can-do attitude.

Yes, we Oberliners have pluck.

None of this is to say that journalistic endeavors on campus go without support. Quite the contrary. Editors at both of the major newspapers get paid (not enough, cough, cough). And as magazines and newspapers have proliferated here on campus over the last four years, I've seen the budgeters take it in stride, providing adequate funding for all of them. And, though I can't speak for all of the magazines here on campus, Wilder Voice, a publication for which I am the managing editor, has received nothing but support and generosity from the administration and governance bodies.

I don't have an elegant way of finishing up this post, so I'm thinking I'll just end it now.

UPDATE: Fellow blogger, and a professor here at Oberlin, David Walker makes several excellent points in a post that is like mine, just written better and before mine. He writes:

Prospective students interested in journalism often wonder about the advisibility of coming to Oberlin, where we teach no formal journalism courses. Wouldn't they be better off, they ask, going someplace like Northwestern or UNC, where they could take focused, pre-professional courses as a journalism major? The journalists I know say just the opposite, in fact: that a broad-based liberal arts education that trains you to think seriously and creatively, and exposes you to ideas and approaches across a range of disciplines, is much better preparation for a career that will undoubtedly take unexpected turns. A major in English, or history, or politics, or neuroscience--virtually any field, really--will train you in skills of analysis and communication that will be useful no matter what career path you follow. The specific technical skills needed in journalism can then be acquired easily in a graduate program or internships, or through on-the-job experience.

He also put together an impressive list of Oberlin grads turned professional journalists. It seems that the lack of an outright department hasn't stopped Obies from taking the publishing world by storm.

There is, in fact, an OSCA publication. It's goofy and fabulous, but more like a cute little zine than a full-on publication. It drifts around co-op dining rooms and housing bathrooms a few times a semester.

Has the Journal of Proper Thought been renamed/still in existence? I seem to remember it floating around my freshman year and thoroughly enjoying the articles.

I'm pretty sure I did read the OSCA zine while in the bathroom. I remember recipes--good ones, if memory serves.

Wilder Voice is The Journal of Proper Thought. They changed names after only one year as The Journal.

I'm not sure that Wilder Voice's pun (as in Wilder Bowl) is any better than the goofiness inherent in The Journal of Proper Thought, but, whatever.

I'm actually disturbed that editors for The Review and The Grape get paid—especially when the writers (at least at The Review) don't get paid at all. Also, in the age of Teh Internets, we pay $20,000 a year out of the Student Activity Fee just to print those two publications.

Well, I can tell you this much, The Grape would be short at least one copy editor (me) if I weren't paid for it.

And, while writing is time consuming, etc. The fact of the matter is that the editors at both The Review and The Grape spend a lot of time--a lot--on getting their publications ready.

Also, I should point out that we pay more like $40,000 a year for both of those publications, but of that, only a small fraction goes to paying the editors. The healthy majority goes to printing--an expensive endeavor (made more expensive because we're in the middle of bumfuck Ohio).

Frankly, and lastly, I don't think we'd have The Review or The Grape were their editors not paid.

Let's aside the editor payment questions for now. What do you think would be the effect of publishing The Review, The Grape and other student publications solely online? Traditional publications like the Christian Science Monitor are already making that move. Thanks.

I think the effect would be a sudden and immediate loss of readership for both The Review and The Grape.

Frankly, I wouldn't read The Review very often were it not for days where I have to eat Stevenson by myself. As good as I think Oberlin's myriad publications are, I doubt the campus would read them as often. The thing is, it's far, far easier to read--or think of or want to read--when you're given a print copy. It's far, far more difficult to read something that you rarely see around and have to go out of your way to read.

What's more, The Christian Science Monitor, unlike college publications, doesn't serve a hyper-specific audience. The Review and The Grape are designed to serve the roughly 4,000-odd students and staff of Oberlin, and those publications can better serve that very specific audience by being in print--and thus more accessible.

When you don't have a specific geographical audience (as in, if you're The Christian Science Monitor), then being online-only isn't nearly as much of a bar to your readership.

Also, for better or worse, the world out there is still print-based, and Oberlin is a school. It would be weird, I think, if our paper of record weren't a paper.

But, hey, that's just my take. I think that having print publications--expensive as they are--is an important part of developing a strong journalistic and cultural discourse on campus.

What do you think?

I think that there should be fewer paper copies and more copies on the datawebs!!!!!!