Seeing Bill Cosby come to Oberlin was quite a treat, in more ways than one. This was during my well-documented commencement week experience, and I almost didn't get to go at all. The ticket distribution for both Stevie Wonder and Bill Cosby was handled by lottery, which I preferred slightly to the old system where tickets were given first come, first served at Hall Auditorium starting at noon on some day and often sold out within a half hour or so. It seemed like alumni got the lion's share of the tickets, and students got the leftovers. After the first round of ticketing, I was left out in the rain for both Stevie and Billy, plus I missed the thrill of Yoko Ono, so I figured I would watch both on the movie screen at the Apollo or something. Then, one May night, I checked my email around 10:50 PM. An email that looked suspiciously like one of those internet scams involving Kenyan princes had been delivered around 9:00 PM. Apparently some alumnus gave up one of their tickets, and if I replied to the email by 11:00 PM the same night I could claim it. I replied to the email, securing my ticket to see one Dr. Bill Cosby.

When I learned that I would be seeing him in the flesh, I decided to watch some of his comedy from early on in his career, and found a great video of him appearing on Dick Cavett's show. He was twenty-something, more than six feet tall, and built like a running back. And he was really funny.

Bill Cosby has been an old man to me as long as I have been alive. His show (dammit, I can't remember the name of it) was on when I was very young, but we never watched it in my household. I've heard him speak out against foul language in rap music, irresponsible fathers, and 'those young people driving around in their horseless carriages' through the years. I had this image in my head of a leathery, turtle-shaped curmudgeon in a sweater. Young Bill Cosby took me a bit by surprise. 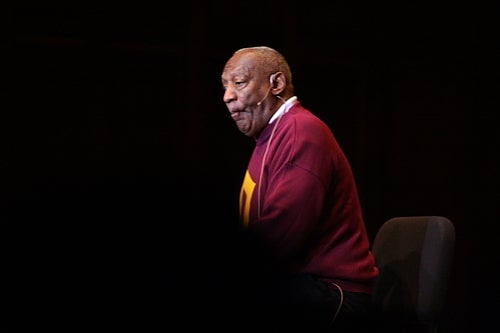 Bill Cosby demonstrates how useful sucking can be.

Cut to Finney Chapel during commencement week. 'The Coz' came onstage to thunderous applause, wearing a scarlet sweater with a big 'O' knit onto the front. He spoke briefly on the ridiculousness of kids saying "that sucks," and I thought "here we go." He went on, extolling the benefits of sucking. He was right, of course, as sucking is about the only thing babies know how to do when they are born, and indeed sucking keeps us alive during our first few months on earth, and went on to tell stories about childhood friends, girls, and his parents. What struck me most about his performance was how well he inhabited each of the characters he was talking about. When he told a story about how he and one of his friends saw his brother french kissing a girl, he told it like a seven-year-old would tell it, and his face was wrinkled into the exact face a seven-year-old would make when witnessing such an act. Despite being in a jam-packed Finney some distance from the stage, I felt like I was in a living room hearing Bill talk candidly about his childhood. His language was squeaky clean, even when he was talking about sex in relatively explicit terms and detailing a 'birds and bees' talk he and his father had. In a crowd of people whose heads ranged from blue hair (old people) to pink hair (the girl next to me, an Obie) to no hair (babies. gross), he told stories that made everyone laugh.

Seeing him tell stories like that onstage brought out the desire to perform in me like nothing had in a long time. I used to be in plays, musicals, band performances, and choir concerts all the time, but stopped after Junior High school when I got more seriously into running and less seriously into wearing polyester band uniforms in 90-degree weather. Occasionally I will see a musical or a piece of performing that stirs something around deep down, and Bruce Springsteen's 'Glory Days' starts playing over a montage of me as Sky Masterson in Guys and Dolls in 8th grade, me playing alto saxophone in a 6th grade band concert in the hot-as-fire gymnasium at Rock Bridge High School, me MC-ing a talent show my senior year. Being involved with improv this last year has helped me scratch this itch somewhat often, and certainly let me enjoy being around being around 'performers.' Thespians just have a different kind of smell to them, don't they? Take a sniff next time you catch one in a net.

Cosby barely left the chair that was stationed at center stage, but it hardly seemed to matter. It made me wonder why so many other performers have to move all over the stage and curse like the Winnebago Man (look it up if you want to hear some A-1 uses of the f-bomb). It seems lazy and a little desperate. Then again, not everyone can be Bill Cosby. 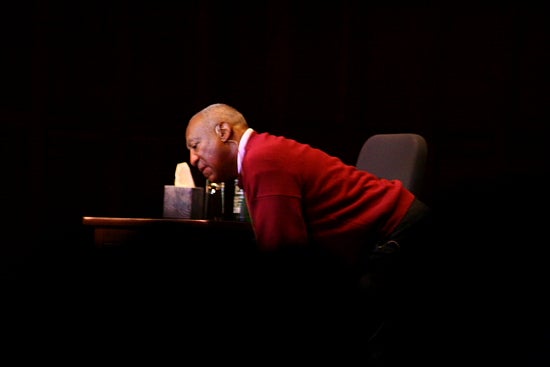 The only time he left the chair. From this angle, he does look like a turtle in a sweater!

If you haven't seen the show whose name you can't recall, by all means, treat yourself to a few episodes of the Cosby Show. Pick any year. Quality television, dealing with themes and issues that are universal. It just so happens that this show is about an African American family and most Americans aren't used to seeing African Americans portrayed in a positive way on TV, or in the media in general.
Or go back a few decades and see him in I Spy with actor Robert Culp. Groundbreaking television for an African American man to have a lead role and to work alongside a white man. They were undercover government agents, each being three-dimensional characters. Consider it pre-James Bond. The late Culp even guest starred on The Cosby Show a few times.
Cosby's body of work in television and the movies, along with his unique comedy, are sometimes overshadowed as he speaks out against what he sees are breakdowns in family and community values. At 70+ years old, he has a right to be critical.
How terrific for you to see him in person. Wish I had been lottery lucky. But I did see Stevie.

After sharing my experience seeing Dr. Cosby and this blog entry with a number of my family members, I received a surprise. As it turns out, my family did watch the Cosby Show weekly for years and years, the years before I could remember of course. They even took time out to watch it on Thanksgiving. The things I missed out on being the youngest kid. I did catch a clip of I Spy during the Kennedy Award ceremony for Cosby last year. I suppose Bill could have some legitimate complaints about the quality of TV shows in recent years.