The reason the Oberlin roommate situation worked out so well probably had something to do with Oberlin's roommate survey. As I recall, Oberlin's survey doesn't just ask the essential questions, like whether you are messy or like perfect order, or what hours you wake up and fall asleep. It also asked the all-important questions of what your favorite music was and what music could you NOT STAND. (This is very important at Oberlin. After all, we love music, often listening to it constantly. This could drive a wedge between potential roommates as fast as anything else.) It was a thorough, but not ridiculously long form.

And then I got my roommate assignment during the fateful summer between schools. I can't remember the exact method by which I found this out (it has been four years), but I remember being awfully sure that this was a joke. "Alexandra Anemone" was not the sort of name one expects to find outside of a Disney movie or children's book. Nonetheless, I called the phone number provided.

Turns out that she went by "Sasha" and was also from Virginia. She was a cello student that had fallen prey to wrist problems at her former conservatory, and she was transferring as a chance to study both music and liberal arts. We figured out who would bring the fridge and that the other wasn't a freak, and we waited to meet up in August.

Come the first day of orientation, it turned out that we both also had absurdly practical fathers (who got out of the way of all this dropping-off business ASAP) and mothers insistent on making sure all was taken care of. We settled our things into either side of the divided-double (I had two closets and the door to the hall, and Sasha had the drawers and a door into mine), and started to get to know one another once our mothers eventually departed. It turns out we were living on the transfer hall, where there were many other excellently paired roommates. We became a tight-knit group that semester, and despite becoming involved in our own different activities and friend groups, we were (and many still continue to be) great friends and supports to one another.

Our rooms can give you a pretty good idea of our personalities: mine was filled with books, papers, boxes of useful things, posters of impressionist art, cleaning supplies, and warm clothes and blankets. 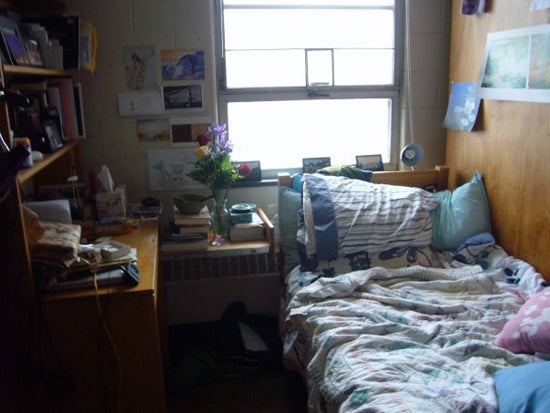 Sasha's was covered with neatly organized and brightly colored photos of far-away places and otherwise filled with only the most essential things. 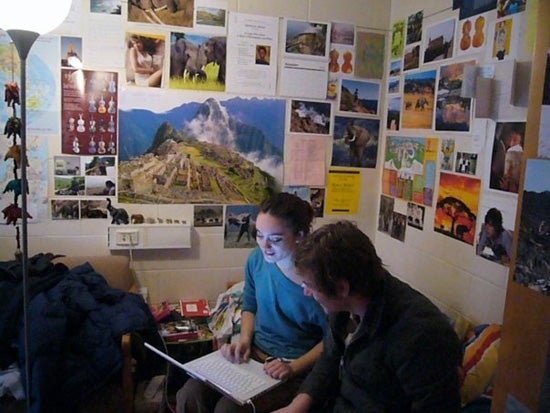 Sasha had traveled many places (her linguist parents, who met over a rare edition of a Russian dictionary, made sure she had lots of adventures), lived in quite a few (New York City, Boston, Williamsburg, and Maine), and was calm, but with a devious sense of humor. I had lived in Virginia my whole life and really liked to be prepared for everything so as to be helpful to anyone and everyone. Sasha wound up being my rock. She kept things in perspective for me when I got stressed, introduced me to nature documentaries, and tried to talk sense into me when I dealt with my first Northern winter. 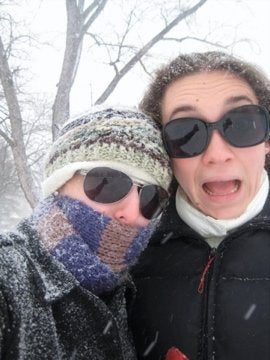 Sasha wound up majoring in French and taking studio courses (but not majoring) in cello in the Conservatory. She also got involved in a trio of lovely musicians. Now she is making her way in Philly, working in physical therapy. In her words, she's also "Involved/'working' at/playing at/some verb with two urban farms within a MILE of my house (Philly is awesome). Like, I'm selling produce for one of them at an arts fest tomorrow that has a costumed bike derby and a mud pit, if that gives you a good picture of my life." Essentially, Sasha is living the post-Oberlin dream.

I obviously became an RA. In fact, I moved to the room exactly next door the next year, and fostered another set of Oberlin transfers who also had great roommate pairings. Sasha and I didn't become BEST FRIENDS FOREVER AND EVER AND EVER, but we have mutually lovely feelings and awesome memories together. Like when Sasha opened a frozen diet Pepsi in the hall and it exploded. 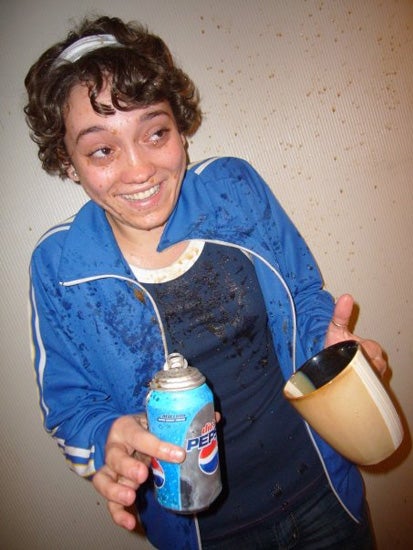 This post is so sweet! It constantly amazes me how well Oberlin roommate pairings work out: there were 18 first-years in my co-op freshman year, and by some miracle, everyone ended up living with someone they were incredibly compatible with. Your roommate doesn't have to be your best friend -- and for some folks it's incredibly distracting if they are -- but it's always great when they balance you out in just the right way :)

Here here for the balanced but not necessarily BFF roomies!

How did I never meet Sasha? I presume it's because you and I weren't really friends when you got here... but maybe this shall be remedied in the future! This is what reunions are for.