For many years, The Bluest Eye has been my favorite book. Before I even knew how to make sense of her words and stories, I recognized the covers of Beloved and Song of Solomon on my mother's nightstand. So clearly, when it was announced that Toni Morrison would be paying a visit to Oberlin, I knew I had to go see her speak and, if possible, get a little closer. For the first time in my Oberlin career, I shamelessly pulled every string I could to find a way to secure some face time with Dr. Morrison herself. Try as I did, I hit a wall and found myself unsuccessful.

While I was lucky enough to have a ticket to the convocation, I found myself in Ben Franklin's one day (the local second-hand book store) buying multiple copies of The Bluest Eye, one for my mother and one for me (whenever I have a copy, I always end up giving it away; I've already given away two copies at Oberlin). Was I going to be able to get them signed? I quickly pushed the thought out of my head, as to not get my hopes up to later have them crushed.

As I exited Ben Franklin's, I finally called my mom to share with her that Toni Morrison was coming to Oberlin. Her reaction was exactly what I expected, thrilled beyond belief. She began to tell me stories of reading Toni Morrison as a young adult and my mind flashed back to turning the pages of Tar Baby to see my mother's neat annotations in the margins. She expressed how desperately she wished to be in Oberlin with me and when I hung up, I desperately wished there was some way for me to share a little bit of this experience with her.

The next day, it was suggested to me that I email Professor Meredith Gadsby to see if there was any time that the African American studies department had been allotted with Dr. Morrison. When Professor Gadsby emailed me back, I was delighted to find out that there was going to be a student session hosted through the president's office. I began to let my hopes creep back up.

On the day of the convocation, after attending my classes and doing homework and studying, I ran down to West Lecture Hall in the Science Center at 4:30 to secure my seat at the student session. I sat in the second row and took deep breaths. When Dr. Morrison came out, I was surprised at her appearance. She was in a wheelchair and visibly much older than her photo on the back cover of many of her novels. She had cut her salt and pepper dreadlocks, also a distinct difference from the well known photo. However, from the moment she opened her mouth, I was completely enthralled. After reading an excerpt from A Mercy, she answered questions from the small audience. Never have I heard questions be answered in such an elegant, concise, and wise way.

After the session, a few friends and I took our books to the stage in hopes of obtaining an autograph. We were given a stern look by a woman who I assumed to be Dr. Morrison's assistant. "She's not going to sign anything." After looking at each other, my friends and I decided that we should still thank her for the extra session. We thanked her dearly, and as we turned to walk away, Dr. Morrison said to us, "Don't think I didn't see all those books, is there something else?" And just like that, she signed autographs for a few of us, including both of my copies of The Bluest Eye. 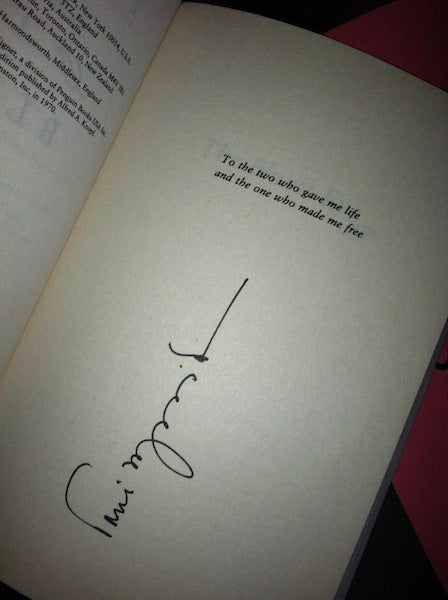 I sent this photo to my mother because I couldn't wait to surprise her with it in the mail.

While the convocation that evening was just as wonderful, I had already had my Toni Morrison moment. A moment that I'll certainly never forget.

Postscript - I was also lucky enough to go see Herbie Hancock in concert the night before, which reminds me so much of my father who is an avid Hancock fan. While I was not as lucky as Ruby, I did have excellent seats thanks to my dearest pal, who wrote a pretty sweet review of the concert for Cleveland Classical.

Oh my goddddd that's so cool!!

The convocation was excellent. Toni's reading from Home was like she was reading a bedtime story to all of Finney Chapel. Gives me shivers just thinking about it.

I'm a huge Morrison fan as well. I had to settle for having to send my book to her to have it signed. She had to leave immediately following the convocation and was unable to do the book-signing. She honored her commitment to sign any book sent to her which truly impressed me.
Be sure to read the Bluest Eye (again) at her Bench by the Road at the corner of Main and Lorain streets. Do you have a favorite?

It was so good to revisit this blog--just shared with my Tuesday Talk peeps.