Prologue: Oberlin's theme halls may be exceptionally geeky, but that doesn't mean we don't get up to mischief -- far from it! Last year, Tess blogged about one of Sci-Fi Hall's raids on Classics Hall. It seems only fair that Classics Hall should get to tell our side of the story, in an appropriately epic way...

Sing, O Muse, the rage of Sci-Fi Hall
who descended with their Nerf guns, set on blood,
but were thwarted by the ranks of noble Greek-
and Roman-lovers, and made peace.
Long have two theme halls made their homes in Oberlin,
on opposing ends of campus: one in North,
the Sci-Fi Hall, where Doctor Who is king.
Its twin, found deep in South, is Classics Hall,
where Caesar and Herodotus are loved.
Opposing dorms, opposing themes -- and so
when classes started, once they'd all moved in,
they eyed each other with mistrust and scorn. 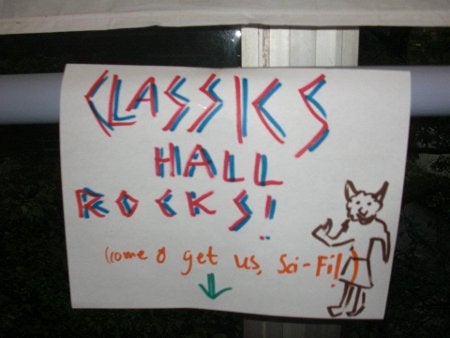 Yet for three weeks they kept uneasy peace,
until a missive came down from the north
into the hands of Classics Hall's RA:
a raiding party sought to bring them low.
Then the Classics-lovers felt true fear,
and gathered in their sanctum to conspire.
With the cunning of Odysseus they did plot
to keep their hallway safe, protect their home
and force their noble foe to fear their strength.
So, shaping sheets of cardboard into swords
and wrapping togas 'round their stalwart chests,
they armed themselves, withdrew, and lay in wait. 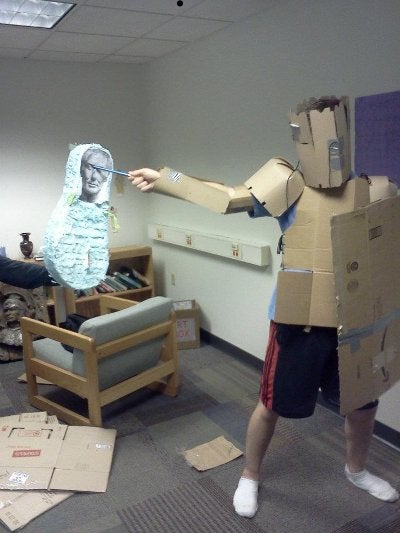 Matt tests his arms against our Julius Caesar piñata, left over from last year's Ides of March.
The Sci-Fi hordes crossed campus, bellowing, fierce,
burst through the doors of South, ran up the stairs
to the floor where Classics Hall was said to lie.
Arriving there they found no sign of Greeks
or Romans -- but instead "Postmodern Hall",
a silent, empty land devoid of heart.
The walls, stripped bare, showed nothing but white paint.
As for who lived there -- well, to read the doors,
the residents were named "bias", "shame", and "why?"
And in the lounge, the heart of any hall
they found nothing but art to modern tastes:
a set of clothing seated on the couch,
a blank piece called "Installation" on the wall.
On a table sat a dish of sweets,
the only spot of color in the room. 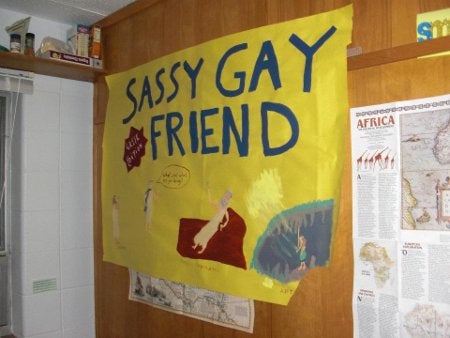 All of our decorations and hall emblems were hidden in people's rooms -- including our Ancient Greece-themed Sassy Gay Friend poster, which features Antigone, Oedipus, and Socrates.
The sugar called the puzzled warriors on.
But as the first hand reached to grab a piece
the Classics mob leaped forth in ambush,
waving weapons high above their heads.
And so the battle broke out. On one side,
hoplites brandished cardboard swords and shields,
advancing bravely to defend their home.
The enemy fought in Star Trek uniforms
and cloaks, emitting mighty battle cries.
It seemed the fight, so fierce, would never end
-- that is, 'till, bursting forward from the fray,
a Sci-Fi envoy called the troops to halt,
unrolled a scroll, and spoke these words of war: 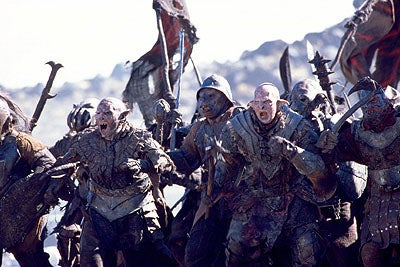 I don't have any photos of the Sci-Fi horde, but this is pretty much what they looked like.

WE, being the people of Science Fiction and Fantasy Theme Hall -- henceforth known as "Sci-Fi Hall" -- do on this day, the twenty-third of September, Year of Our Squid two thousand and eleven, issue this proclamation to mark our raid on Classics Hall.

IF it has been declared that on this day Sci-Fi Hall won the Battle of South Campus, it shall be henceforth known that your Imperator has accepted our terms and sworn vassalage to our nation. THOUGH you offer your fealty, let it be known that no part of your government nor cultural heritage will be infringed upon. YOUR flag, be it extant or yet to be designed, shall bear in its upper left hand corner our insignia.

IF it comes to pass that vassalage is undesirable for you and your people, it is requested that an alliance be formed to better our two nations. AS our allies, we would ask you to perform two tasks: WE request that your forces will join ours for future raids upon other theme halls. ON a as-yet-to-be-planned day, you shall come to our home and bake cookies with us. IN addition, we as SciFi Hall will negotiate upon your terms whenever you as a hall see fit to do such a thing. UPON this time, a treaty shall be drafted, agreed upon and signed by members of both nations.

IF it comes to pass that neither of these plans is favorable, it shall be known that Sci-Fi Hall and Classics Hall are officially "in a fight." IF this comes to pass, terms of war will be drafted, and we will meet you on the battlefield.

The Classics folk let Sci-Fi speak their piece,
and then their leader stepped forth to reply:

Classics Hall may be a small nation, but we are a mighty one. We are a nation of Plato and Socrates, of tombs and fountains, peppered with Pantheons and public baths. Like a caryatid, we have supported your culture; like Atlas, we have carried your world from antiquity. Our armies have conquered lands from India to Londinium. Our scientists knew the universe from the atom to the celestial heavens, long before your fictional worlds were a gleam in Jules Verne's eye. Our culture is vast and mighty; its influences stretch beyond the seven seas. History has proven that we will not be forgotten. You may try to tame us, like the medieval nobodies before you, but like the Renaissance, we will return. We will join you in alliance as equals, but we do not give up, and we do not surrender. 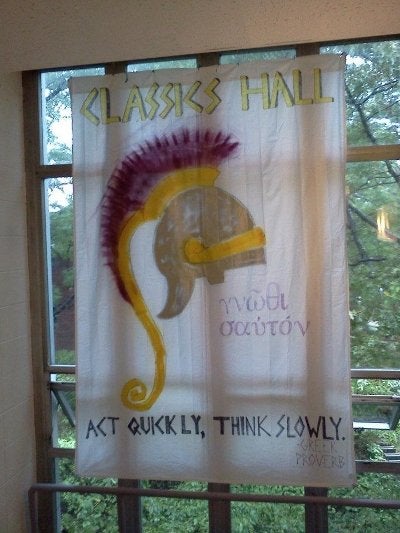 Proclaiming this, all pledged to drop their arms
and sign a pact of friendliness and trust.
Thus pleased, with spirits high and hearts alight,
they set their sights to new and mutual foes:
Sustainability and DIY,
two unsuspecting theme halls soon to fall...

Epilogue: Following the Battle of South Campus, relations between Classics Hall and Sci-Fi Hall have been peaceful, marked by collaborative gatherings such as Classic Doctor Who Night. Sustainability Hall and DIY Hall are still standing -- for now...

This...is amazing. And would tempt me to join Classics Hall, if it weren't for my immense love of Harkness.

This is excellent, and I adore it.

...though your picture is pretty accurate, too.

This is fantastic! I really appreciate the epic-style verse, even though it's making me miss my Latin studies...

This is wonderful. Perhaps the time has come for the small yet determined tribe of BioDigital Jazz House to ride out on its lightcycles once more...

Where is the Classics Hall flag? I did not see it in the stairwell on a recent visit. Is it still in hiding? Captured?

This is glorious. Other theme halls, beware.

I was sick for the raid this year. God do I wish I wasn't.

I love the epic poem format. You're the best.

Eli. I applaud you so. Epic battles deserve epic poems. You should share this with TVN. He'll love this.

Eleanor: Classics Hall has historically been a repository of former Harkies. Just saying...

General: Thank you! My roommate took some great photos of y'all at the raid, but then her computer died and they were destroyed. Thanks for filling the void.

Emily: As a good Classics student, I should probably encourage you to resume your Latin studies. But as a good Greek major, I'd be remiss if I didn't tell you that Greek is way more epic...

Nora: That's a good question. It disappeared over Parents' Weekend; I'm not sure where it went.

Everyone else: :D Thanks!

The flag is currently folded up in the lounge; it was ripped down by some drunk and we haven't gotten around to rehanging it.

This is the best thing I've ever read.

Oh my gosh, Eli. This is epic. I love this poem and I love you. Can we have a dramatic reading at some point?

Prospies: join us! Apply to live on Classics Hall your first year! You get all the community of a first-year experience dorm with so much less of the drama.

I want to live in Classics Hall!

As a founding member of Classics Hall, this warms the cockles of my heart. And although we always talked about throwing a spear over German House, I'm glad some conquering is finally occurring -- and that it still exists!

As one of the two original founders of the Classics Hall, you have all just made me very, very proud.

If you find yourself at the crossroads in the dead of night, making a sacrifice to dread Hecate, mention my name - you'll get a special discount on black sheep next time.

Max and Meg -- Your kind words are an honor. If you stop by Oberlin any time soon, you're welcome to come up and visit us!