As a kid, my mom lovingly packed me lunches to take to school every day. She did this until I was (slightly embarrassingly) in the seventh grade. My family always ate dinner together, which only stopped when I started high school and was at the ballet studio for 3-4 hours almost every weeknight. I usually came home at 9:30 pm and would eat a small second dinner before doing my homework and going to sleep. But still, on weekends and Friday nights we ate together, often in front of the TV watching Star Trek reruns. On birthdays, there was always homemade cake, and as my sister and I got older, we got special breakfasts on days where we had exams in school or standardized tests like the ACT or SAT. In my family, food has always been a source of caregiving and a way to show love. However, it wasn’t until I went to Oberlin that food became associated with friendship and community.

When I was a first-year at Oberlin, I ate in the dining halls. The co-op system had attracted me to Oberlin, and I knew it was something I wanted to take advantage of while there, but for my first year I wanted the simplicity of a dining hall. This ended up being a good decision. During my orientation, I sat with a sort of random group of people. A few were in my PAL group, a few lived in the same residence hall, and a few of us had met in other ways. However, what started out as a rag-tag group of new freshmen turned into my first-year friend group. With an almost religious consistency, we ate lunch in Dascomb (RIP) at noon, and dinner at Stevie at 6:00 pm. Every day. A subset of us ate breakfast in Dascomb every weekday sometime between 8 and 8:30 am. My dining group ended up being a wonderful regularity in a somewhat chaotic and super busy first semester. Though we didn’t all have a lot in common, and weren’t all taking the same classes, we came together at meals without fail, at noon and 6. Without those meals, I wouldn’t have made some of those valuable friendships, many of which I still have to this day. Three of those people from my core group of friends my first year are now my housemates (more on that later)!

Even though there was a consistent community aspect to my meals my first year, I still wanted to move out of campus dining services (CDS) and join a co-op in OSCA (Oberlin Student Cooperative Association), partially because I was getting tired of the CDS food by the end of the year, and because, at that time, I had little to no cooking skills and wanted to change that. My sophomore Fall, I ended up living and dining in Tank Co-op, the subject of many previous blog posts. I will always remember my first meal as a member of Tank. It was summer, and there was a delicious beet salad, and we all ate on the wraparound porch, a beloved tradition when the weather cooperates. I didn’t know anyone yet but ended up sitting with a bunch of other second-years who were also new to the co-op, and they soon became friends. The food was consistently good that semester, and I loved the regimented schedule of co-op meals: 12:20 and 6:20, every day. I would keep an eye on my email inbox each meal for a menu from the head cook of that shift, getting excited for whatever goodies were waiting for us. That Fall, I came to love OSCA food and OSCA people, a love which only grew. Though I didn’t actually gain many cooking skills that semester since I ended up as a Dining Loose Ends Coordinator (DLEC), a sort of co-op discussion leader and general managerial role.

What I lacked that Fall in cooking experience I made up for in the Spring semester when I became one of the co-op’s elected granola makers (see Megan’s ode to granola post here) and worked on two different cook shifts. Aside from becoming weirdly famous in a very small Oberlin microcosm for my giant batches of granola, I became much more confident about being in a kitchen. One of the shifts I worked was run by my friend Luci. Her approach to head-cooking was very collaborative, and I have many fond memories of just the two of us (sometimes with one other person) frying, baking, chopping, stirring, and getting out a delicious meal. My other cook shift was run by two first-years who had far more agency and talent in the kitchen than I did. I learned a lot from them, became a designated rice-maker, and came to appreciate sauces and condiments like never before. My last semester in OSCA was the Fall of my junior year, again living and dining in Tank. Though I was sadly denied the position of granola maker, I was on a few cook-shifts again (one with a vegan chef and one with a folk musician who’s toured nationally) and improved my cooking skills even more. Though by the time I went abroad I was ready for a small break from co-op life, I have so many fond memories and friendships from my time in Tank. On long Ohio winter nights, I often find myself reminiscing about returning to the co-op in the dark, seeing it illuminated from within, entering to a lobby full of friends and the promise of a good, warm meal on a bitter November evening. That home-y feeling from my co-op is something I’ve tried to inject into my life wherever I go, and I’m lucky that my senior year, I’ve gotten it.

This year, I live in an off-campus house with three housemates who were in my freshman year friend group. In a slightly battered and janky (or lovingly quirky, depending how you look at it) house we affectionately call the Gnome Home, I have found a new community around food and have rediscovered what it means to show love and care through feeding others. While the Gnome Home is only four people, rather than my former co-op’s 40 occupants and ~80 total diners, it still feels like a tiny co-op sometimes in the best possible way. Since we’re required to be on a meal plan this year, usually we get one a meal a day from campus, but we cook the rest of the time. When we cook, I often find myself taking on a mini head-cook role, delegating tasks to my housemates like chopping, grating, or stirring. My friend Alex is our “Vibesmaster” and somehow plays the exact right music every single time. During the warmer months, we went to the farmer’s market every weekend to stock up on fresh produce (with a pit stop at Blue Rooster for baked goods). We light candles and eat oatmeal together in the mornings. On Sundays, we make brunch and clean the house. On days that we’re too tired to cook, we make Annie’s white cheddar mac and cheese. I grew up eating Kraft, but I have become an Annie’s convert. We have bread, granola, and even tasty treats, courtesy of my housemate Athina. Sometimes it does truly feel like the world’s smallest and coziest co-op. Being able to cook with those I love and to cook FOR those I love has been one of the most joyful and fulfilling parts of my COVID college experience, and I am incredibly grateful for my tiny community this year. As I spend the winter break at home, I find myself greatly missing cooking vegetarian food in my Gnome Home in our wood-paneled, very 70s kitchen. At Oberlin, food has become synonymous with community, and that’s a beautiful thing. It’s one of the many examples of something I will take with me when I graduate. And it’s not knowledge, a textbook, or a degree. It’s something much more delicious. 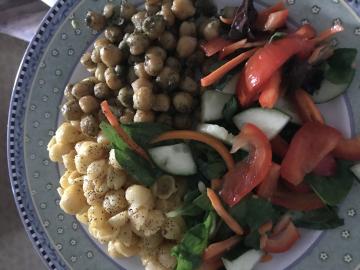 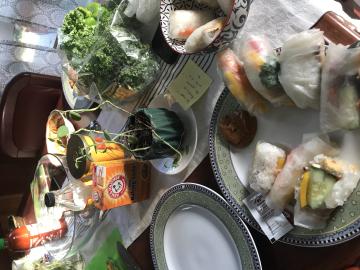 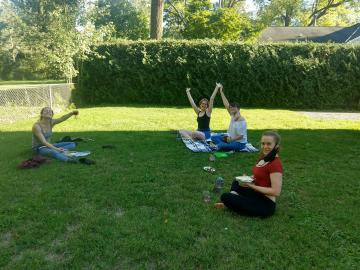 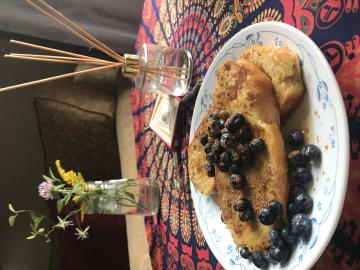 Any time you want to visit me and cook I’d be happy to have you over. Miss you!