In addition to measuring which pieces were selected most often, it's also interesting to approach the pieces in chronological terms. Here, there are two paths: one can divide them by the periods in which they were produced, which I'll do here, and by the date they were acquired by the Allen, which I'll do in a later post.

The class coverage was divided equally into four periods, classical, medieval, Renaissance/Baroque, and Modern. If we use these periods to categorize what students wrote about, they selected two pieces from classical antiquity, one from the Middle Ages, thirteen from the Renaissance and Baroque, and forty-six from the period after 1800.

The last two broad chronological sections can be broken down in a bit more detail:

The oldest piece that a student wrote about was this Greek amphora depicting an abduction: 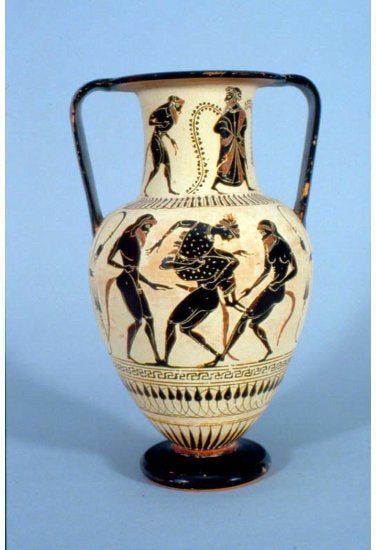 A moment's glance shows that the selections skew modern; of the sixty-two works selected, over two-thirds date after 1800. Though I am a medievalist, this skew does not particularly surprise or dismay me; in fact, this temporal emphasis is baked into the course, which spends an equal number of sessions on each of the four periods. While this may look like equity, it conceals a modernist tilt. Each succeeding period is shorter than its predecessor, with antiquity lasting about 1000 years, the Middle Ages about 800, the Renaissance and Baroque about 500, and the modern about 200. Since we spend an equal amount of time on each of these four periods, the years after 1800 received more fine-grained attention than the preceding ages.

Within the modern period we also concentrate heavily on the period between 1900 and 1920, which brings in cubism, abstract painting, and dada in quick succession; this temporal concentration is reflected also in the works the students selected. With nineteen works dating between 1900 and 1920, almost one third of the works selected by students come from this chronologically brief and art historically rich period.

I'll be back later with thoughts on about the chronology involved in the Allen's acquisition of these works.