Heather Leigh Brown, Oberlin’s costume shop manager in the Department of Theater, made 130 masks that have been sent to the Cleveland Clinic, as well as a small number of masks for the campus community. Brown explains that the masks are meant for replacing the general surgical mask, not the specialty filtered or wired ones because she’s using 100 percent cotton fabric and elastic leftover from past theater productions.

“I know that the family of costume producers in professional and educational costume shops around the country is involved in the efforts to increase personal protective equipment (PPE) and to flatten the curve” of COVID-19 infection, says Brown, noting that sewing is a skill she’s happy to use.

“To me, as a theater artist, sewing is a means to an end. Live storytelling is that end. But, it is a skill that I have, that I could do something with. As much as anyone, I have friends and relatives for whom getting a cold would be hard, let alone COVID-19. Mask making seemed like the responsible choice.”

The masks Brown sent to health care workers reminded her of the students and the costumes worn in shows that have been performed in her last six seasons at Oberlin, including Cabaret, Body of Bourne, The Bluest Eye, Turn of the Screw, and Spring Awakening. Her work sewing masks has been combined with cleaning the shop in the wake of Cosi Fan Tutte, the opera theater production that was scheduled to be performed on March 11, 13, 14, and 15, but came to an abrupt end. The show premiered in a performance that was viewed only by faculty and family, while the second show was performed with no audience but was live-streamed. The following two shows were canceled as students were packing up their residences to go home.

Brown says the people on campus who received masks have been grateful. “Some people were at risk and needed them before the CDC said we should all be using them,” Brown says. “Ohio (Gov. Mike DeWine) is encouraging us all to consider the future as masked avengers until there is a vaccine, so there is a great need.”

Brown references the website GetPPE.org , which matches donors to medical workers who are affected by the surge of COVID-19 cases, as well as the #millionmaskchallenge as good sources for anyone who wants to help. 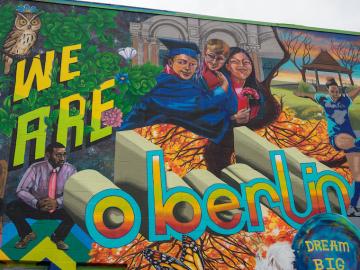