When Professor of Theater Matthew Wright describes the genesis of the new Eric Baker Nord Performing Arts Annex, he likes to emphasize that it’s not simply a story of the construction of a brand new building; it’s actually a story about multiple buildings that led the campus to erect this fresh performing arts structure.

A Brief History of Theater at Oberlin

Built in 1953, Hall Auditorium is where the story of theater begins. Originally employed as a multi-use auditorium, it was home to recitals, orchestral concerts, and the occasional student-produced play. When the building was constructed, there was no Oberlin College theater department—the department didn’t come along until the 1970s. The cavernous auditorium was large and limiting from a production standpoint, and it was never intended to be exclusively a theatrical venue.

In 1960, Hall Annex was built in order to expand the performance space on campus and remove some of the burden imposed on Hall Auditorium. The Annex included spaces that allowed for fuller productions, including a shop space and costume area. It also offered space for more intimate productions, unlike what was possible in Hall Auditorium. But according to Wright, it almost immediately had problems, including leaks in the roof, heating system issues, and the occasional water pipe explosion.

When the Department of Theater was formed in the 1970s, it shared a home with the Department of Dance inside Warner Center. The dance studio was located on the third floor, and theater classes were held below, which caused some distractions. Wright notes that theater classes often require a quiet environment for proper concentration and to give space to weighty theatrical moments.

Wright’s favorite anecdote that illustrates the challenges of being located in Warner is when a mother of a prospective student from California was visiting his office on the second floor, while a dance class was taking place above them. “When the dancers took a leap and landed on the floor above, it shook the entire building,” says Wright. “Being from California, the mother immediately ran to take shelter in the doorway of my office—the building shook so much that she actually thought we were having an earthquake!”

Now, in the newly constructed Eric Baker Nord Performing Arts Annex, there are no fears of a shaking building or leaky pipes. The 45,000-square foot performing arts annex is part of a multi-phased renovation and addition project that includes the newly completed Irene & Alan Wurtzel Theater, a highly adaptable space that accommodates between 200 and 300 seats. Nestled alongside Hall Auditorium, the venue serves as a multiform home for Oberlin’s theater, dance, and vocal studies departments. The project was made possible by a generous donation from the Eric & Jane Nord Family Fund, Irene and Alan Wurtzel ’55, and other charitable donors.

The building project was completed in phases, beginning in 2016 with a renovation of Hall Annex. Thanks to a donation from musical composer John Kander ’51, this update allowed the theater department to relocate to Hall Annex from Warner Center. A highlight of Hall Annex is the Kander Theater, a black box theater used for student productions. Upgrades to the theater include a raised ceiling and improved acoustics. A colorful renovated lobby space outside the theater also includes an accessible elevator.

The building’s main entrance and lobby space is sweeping, with an open area that’s gallery-esque. Modular seating, along with tables and chairs, creates an inviting campus meeting or study spot.

Eric Steggall, managing director for theater, dance, and opera, invites the campus to use the lobby space in the new Eric Baker Nord Performing Arts Annex. “This is a welcoming, open space that will be made available for use. I see students up here for classes, doing classes, homework, and having meetings. We want people to come in and see what’s going on.”

Along with upgraded facilities and workspaces, the space also broadens the performance opportunities for faculty and students by expanding the types of productions the theater, dance, and opera departments can offer. Before the addition, the theater and dance departments would host their 15 to 18 yearly performances in either the 550-seat Hall Auditorium or the Little Theatre, which has an 80-seat audience capacity.

Theater major and second-year Alex Howell hopes that the new space will contribute to excitement around theater in the Oberlin community. As a stage manager, he is also looking forward to seeing how the space can be reconfigured for each new production. “Having an adaptable space allows us to put up shows in many new and creative ways, which challenges all members of the production to try new techniques and approaches to their craft,” says Howell.

Some see the new performing art annex as a way to generate additional excitement about the theater department, while others view it as an investment in students’ future careers.

Third-year Maya Wolf believes students will benefit from the expanded spaces. “The new space and the resources that accompany it will provide more students with chances for practical experience toward their future careers,” says Wolf.

A theater major, Wolf notes that the department is growing, and many students are vying for chances to work in similar positions. “Having this space will demonstrate to others that the college is committed to providing its students with what they need to train and learn in their future field.”

View a photo gallery of the entire project, from groundbreaking to completion.

This Week in Photos: First Snow 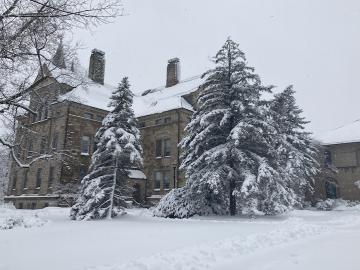 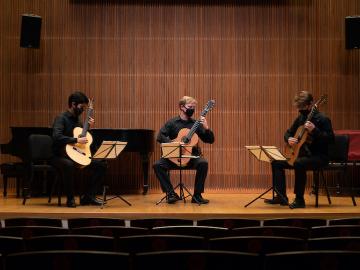 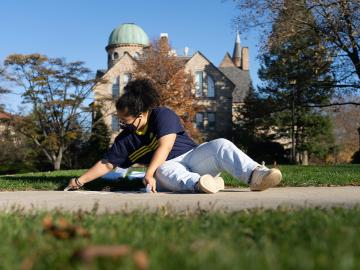