As executive assistant to the dean of students, Debra Herzog provides leadership and administrative support in the division of student life. Some on campus may also know her as a Yeofit instructor. Outside of her work at Oberlin College, Herzog has been honing her acting craft. She plays a prominent role in the independent film The Enormity of Life, starring Breckin Meyer and written and directed by Eric Swinderman. The film was shot in the Cleveland area and is available on streaming services beginning April 6.

Herzog became a member of the Screen Actors Guild (SAG) in 2019, and she has more acting opportunities on the horizon. Watch the full film trailer here, and find out more about Herzog and her film role in this Q&A.

Q. First, describe your role in the Office of the Dean of Students. What does your job entail, and how long have you been at Oberlin?

I am the executive assistant to the vice president and dean of students. This position provides leadership to all areas within the Division of Student Life in terms of overseeing the movement of projects and elevating issues related to the success of the division. I have been in this role since November 2019, however, my relationship with Oberlin began in the summer of 2018 as the project manager for AAPR [Academic and Administrative Program Review], now known as One Oberlin. I am also a YeoFit instructor and teach the Presidential Boot Camp class.

Q. Outside of your work at Oberlin, your main passion is acting. How did you break into acting and film?

In 2014, I was hired by an advertising agency to scout a location for a paddleboarding scene on the Huron River for a commercial being produced by a local tourism bureau. My husband Jeff and I frequently kayak and paddleboard in the region. When we arrived at my location of choice the director exclaimed, “the lighting is perfect—we have to do this now!” Even though they were scheduled to film the next day with actors, they grabbed the wardrobe and paddleboard out of their truck and the next thing I knew, they were filming me going up and down the river. When they were resetting each take, I remember looking at the sunlight sparkling on the water and feeling like it was a moment that was going to impact my life forever. The same agency hired me for other projects which led me to signing with a talent agency in the Cleveland and Pittsburgh areas. Since then, I have done a variety of projects from background work, commercials, runway modeling, pilot work, short film, promotional videos, training videos, television, and now my role as Missy in the independent film The Enormity of Life. 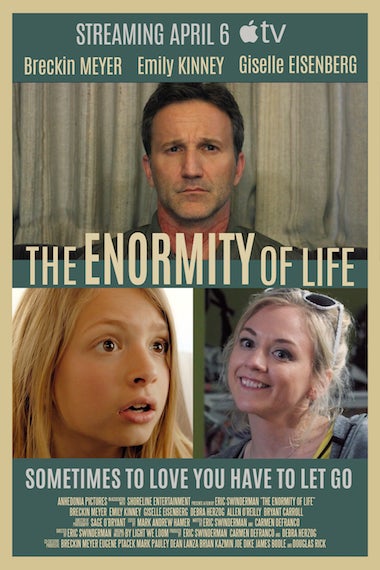 Q. Tell us about your character and how you became involved in this project.

I met the film’s writer and director, Eric Swinderman, when he cast me to play a role in his short film titled Worker Bea. He had invited me to audition for both female roles and told me that I would be perfect for the role of Missy in his feature film, which was approaching pre-production. When I read the script I was fascinated by the character’s desperation and intrigued by her use of manipulation, especially knowing that her flaws were actually the outcome of a difficult childhood. She is not a likeable character, however, she is an important part of the story and shapes how her brother Casey, played by Breckin Meyer, copes with his life situations and relationships.

Q. Describe the experience of working on an independent film. What were some highlights from working on this project?

Independent film is like riding a roller coaster! You never know what might happen next. It was an amazing experience and super intense at times. One of the highlights was actually flying out to Culver City, California, to meet with the director and “the big three”—Breckin Meyer, Emily Kinney, and Giselle Eisenberg (along with Giselle’s mom). It was cool for all of us to meet in person prior to arrival on set. It was an opportunity to gain insight from the director and establish a baseline relationship with the other actors. After dinner and talking for a while, we all pushed back in our chairs and got our phones out. We exchanged numbers and shared photos and just chilled.

Q. Why should people see The Enormity of Life? What do you hope they will take away from the film?

This film is very different and the experience is a true emotional journey. It’s a drama, it’s a comedy, and it’s a love story. And, in my opinion it is the best work to date by Breckin, Emily, and Giselle. It is the kind of film that will stick with you and hopefully create opportunities for conversation on heavy topics. It has the kind of ending that you don’t want to give away and everyone needs to experience for themselves.

Q. How can people see the film? Is it in theaters, on streaming services, or both?

The film is being released on Apple TV, Google Play, and other streaming services on April 6. It will also be available on DVD available at Amazon and Walmart. A complete guide of options is available on the website www.enormityoflifemovie.com. The production company is offering a VIP premiere screening of the film on the evening of April 6 at the Atlas Cinemas in Euclid, Ohio. The socially distant event will offer a mini concert, event poster and T-shirt, the film premiere, and a live streaming Q&A with the three lead actors after the showing.

Q. Do you hope to continue acting? Do you have any new roles coming up?

I hope to pepper in acting gigs while continuing the work that I love here at Oberlin College. Now that I am a SAG member there are fewer opportunities that fit my profile in this market, but that’s OK. I continue to work on my craft and go after the work that comes available to me. I will be in production with another independent scheduled to film in Ohio later this year titled Tamar Buys A Car. I play Kendra, a mom whose daughter hits a rough patch in life and I try to be the calm in her storm.

Q. What else do you like to do in your free time?

I enjoy quality time with my husband and three adult-ish children. We love to hike, kayak, walk our three semi-spoiled silky terriers, and we are big beach volleyball players in the summer.

A multi-year capital improvement plan to upgrade Oberlin’s Student Union is officially underway, with work beginning during Winter Term 2023. Wilder Hall, designed by Chicago architect Joseph Lyman Silsbee—designer of the Memorial Arch on Tappan Square—opened in 1911 as a men’s dormitory. In addition to providing housing for undergraduate men, the building was conceived as a meeting and performance place, and has evolved over time into Oberlin’s Student Union.