David Bowlin, Associate Professor of Violin
Violinist David Bowlin has won widespread critical acclaim for his solo and chamber music performances from the New York Times, Chicago Tribune, the Chicago Sun-Times, and many others. His solo and chamber music performances of a wide-ranging repertoire have taken him throughout the Americas, Europe, and Asia. Among them are dozens of premieres, including the Weill Carnegie Hall world premiere of Mahagoni, a violin concerto by Austrian composer Alexandra Karastoyanova-Hermentin, and the 2016 world premiere of Marcos Balter’s Violin Concerto at Lincoln Center’s Mostly Mozart Festival. A passionate proponent of contemporary literature, Bowlin is a founding member of the International Contemporary Ensemble, named Musical America’s 2014 Ensemble of the Year. Bowlin is also a former member of the Naumburg Award-winning Da Capo Chamber Players. Bowlin is a graduate of the Oberlin Conservatory of Music, the Juilliard School, and Stony Brook University.

“It is a huge honor to be granted this award by my colleagues, and I am truly grateful. My eleven years working with the students at Oberlin have been profoundly rewarding, so it is wonderful to feel appreciated in return through this award.”

Alvin Chow, Professor of Piano
Alvin Chow has appeared throughout North America and in Asia as an orchestral soloist and recitalist. He has also performed extensively in duo-piano recitals with his wife, Angela Cheng, and his twin brother, Alan. Chow has performed in concert halls including the Kennedy Center in Washington, D.C.; Orchestra Hall in Chicago; Weill and Steinway Halls in New York City; and the Mozarteum in Salzburg, Austria. He has presented as recitalist in Hong Kong, Los Angeles, Seattle, Denver, Detroit, and Miami, and has appeared as soloist with the National Symphony Orchestra, Colorado Symphony Orchestra, Alabama Symphony Orchestra, Civic Orchestra of Chicago, Pan-Asia Symphony in Hong Kong, and the Mozarteum Orchestra in Salzburg, among others. Chow is a graduate of the University of Maryland and earned a Master of Music at the Juilliard School before beginning doctoral studies at Indiana University.

“I can't remember a time when I didn't want to be a teacher, and to be at a place like Oberlin is really the fulfillment of that dream. Being surrounded by wonderful, accomplished colleagues and talented students has been inspiring. I feel that I have been a continual student myself because of these interactions, and that has certainly energized me in becoming a better teacher.”

Hsiu-Chuang Deppman, Professor of Chinese and Cinema Studies
Hsiu-Chuang Deppman received a PhD in Comparative Literature from the University of Wisconsin-Madison. She teaches modern Chinese literature in translation, Chinese cinemas, East Asian cinemas, Chinese literature and film, and intermediate Chinese language. Her research focuses on the art of adaptation, history of film, and modern Chinese fiction. She is the author of Adapted for the Screen: The Cultural Politics of Modern Chinese Film and Literature and has published on a wide range of Chinese writers and directors in peer-reviewed journals and anthologies.

“I receive this award gratefully, as an amazing and unexpected honor. Having grown up as a rice farmer in the poorest area of rural Taiwan, I have come a long way to join an intellectual community at Oberlin that takes pride in an educational mission “that knows no class distinction” (you jiao wu lei 有教无类). Simply walking into a classroom in Peters makes me happy, because my students reciprocate my passion for learning. They are responsive, engaged, and care about how their studies relate to the world they live in. It is a privilege to teach at Oberlin.”

Matthew Elrod, Robert and Eleanor Biggs Professor of Natural Science and Professor of Chemistry and Biochemistry
Matthew J. Elrod graduated with honors with a bachelor’s degree in chemistry from Grinnell College and obtained a PhD in physical chemistry from the University of California, Berkeley. After a postdoctoral position at the Massachusetts Institute of Technology and a faculty appointment at Hope College, he joined the Oberlin College faculty in 2001. Elrod’s research is focused on air pollution and climate change, particularly the chemical transformations of both natural and human emitted organic compounds. Since 1997, his lab has received continuous grant support from the National Science Foundation, and he has mentored 52 undergraduate research students, of whom 39 are coauthors on scientific journal articles.

“I truly have the whole Oberlin community of scholars to thank for this award. It's been a great privilege to have been given the responsibility to teach in such an intellectually vibrant community. My faculty colleagues have always set a high bar that I have aspired to meet, and they have also served as tremendously supportive mentors and peers. However, it's the continual inspiration of bright Oberlin students coming through my classrooms and labs that has supplied me with the considerable energy required for effective teaching. As I enter the second half of my teaching career, I remember the sage advice of my undergraduate advisor at the end of his 42-year teaching career: ‘Even though you will inevitably get older and older, your students will never age, and if you play your cards right, you can ride with them in a seemingly new intellectual journey each semester.’ I intend to keep riding for some time to come.”

Robert Shannon, Professor of Piano
Robert Shannon has traveled across the world performing and teaching a diverse repertoire ranging from Bach to John Adams. A double-degree alumnus of Oberlin, Shannon earned a Master of Music at the Juilliard School. In recent seasons, Shannon has appeared in Beijing, London, Hamburg, New York, San Francisco, and Caracas. His numerous performances and recordings on the Bridge label of 20th- and 21st-century composers such as George Crumb, Carla Bley, and John Harbison have been meet with critical praise, particularly his penetrating interpretations of such American composers as Charles Ives. He appears regularly at the Grand Teton, Tibor Varga, and Sacramento American Music festivals; as a guest artist with the Chicago Contemporary Chamber Players; and in duo recitals with his wife, Haewon Song, who also is a piano professor at Oberlin Conservatory.

"I am very honored to receive this award. It seems like just yesterday that I started teaching here. I am fortunate to have worked with many very gifted and responsive students in Oberlin’s unique environment."

Ellen Wurtzel, Associate Professor of History
Ellen Wurtzel began her education at Duke University before earning master’s degrees at Bank Street College and Columbia University. She later returned to Columbia University where she earned a PhD. Wurtzel’s research interests lie in medieval and early modern European history and are particularly focused on the Low Countries (Belgium, the Netherlands, and Luxembourg) and France. Wurtzel’s current research concerns medieval bathhouses and their place in the francophone world from the 12th to 16th centuries. In the classroom, she is most interested in teaching about the subjects of cities and states; science and medicine; gender; Jewish, Christian, and Muslim relations; property and possession.

“This award means a great deal to me because it speaks to the real value of working here—learning with and for students. I feel incredibly lucky to be working with students as bright, challenging, and curious as ours at Oberlin College, and I work hard both to convey the passion I feel about history and to find ways of encouraging students’ own paths to the past. Oberlin is a place where good teaching matters, and from seeing and reading about what colleagues do across the college and the Conservatory of Music, I am even more honored to be among their number.”

Six faculty members from the College of Arts and Sciences and the Conservatory of Music received Excellence in Teaching Awards for the 2018-2019 academic year. 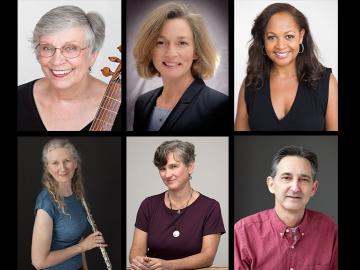 Six faculty members from the College of Arts and Sciences and the Conservatory of Music received Excellence in Teaching Awards for the 2017-2018 academic year. 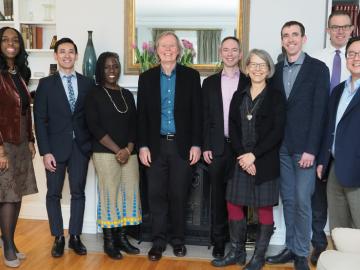 Six faculty members from the College of Arts and Sciences and the Conservatory of Music received an Excellence in Teaching Award for the 2015-2016 academic year.