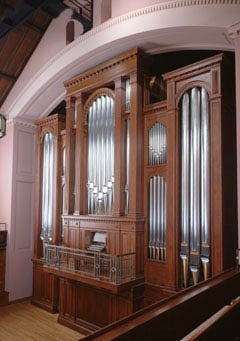 The advent of the C.B. Fisk Opus 116, designed and constructed in the late-Romantic tradition, is based on the symphonic style of the great French organ builder Aristide Cavaillé-Coll. A new 76-rank, three-manual French romantic organ, designed and constructed by C.B. Fisk, Inc. , acclaimed organ builders of Gloucester, Mass., is in its new home in Oberlin College’s Finney Chapel. The dedication of the new 4,014 pipe organ was the centerpiece of concerts and events that took place the weekend of September 28, 2001.

In addition to the instruments on the Oberlin campus, students have access to organs in two churches in the community. A two-manual Brombaugh organ, built in the North German baroque tradition, is housed in the First United Methodist Church, next to the conservatory.

The second organ, a large two-manual instrument built by Hal Gober, curator of organs at the conservatory, is in First Church in Oberlin (UCC), which is just across from Tappan Square, about a three-minute walk from the conservatory. This is a marvelous instrument for hymn playing and anthem accompaniment.

There are two operating modes selectable by thumb pistons with LED indicators. The first mode is Mode Français; the second is American Mode. The two modes are interlocked so that only one can be used at a time.

The combination action will not be able to control the functions on hookdown pedals, i.e., any of the Pédales de Combinaison when in Mode Français.

American Mode relies on a solid state combination action for changes in registration. When in American Mode the positions of the Pédales de Combinaison will be ignored. American Mode has the following drawknobs arranged above the top keyboard and are affected by the General Pistons:

Servopneumatic Lever: This provides a pneumatic assist (similar to a Barker Machine, but more refined) to the Grand Orgue key action. It also allows the addition of the "Octaves graves" coupler to the organ. This coupler connects the servopneumatic lever to itself one octave lower. Therefore it couples the Grand Orgue itself at sub-octaves, as well as any other division that is coupled to it.