One of art history's satisfactions is its vocabulary. Required to address things visual, the field has invented and/or borrowed a number of terms to allow for the simple naming of frequently-encountered complicated forms. Isocephalic is one of my favorites; it describes a group of figures whose heads are all set at the same level, and comes in quite handy when describing some classical reliefs or early Christian mosaics.

One of teaching's satisfactions is learning new things from students. Which leads me to today's word, ipsilateral: "Belonging to or occurring on the same side of the body; connecting two parts on the same side," according to the OED. I learned this word from a student who used it in a visual analysis on this great piece, a wine pitcher from Greece dating to about 470 BCE that was painted by a prolific artist named Douris. 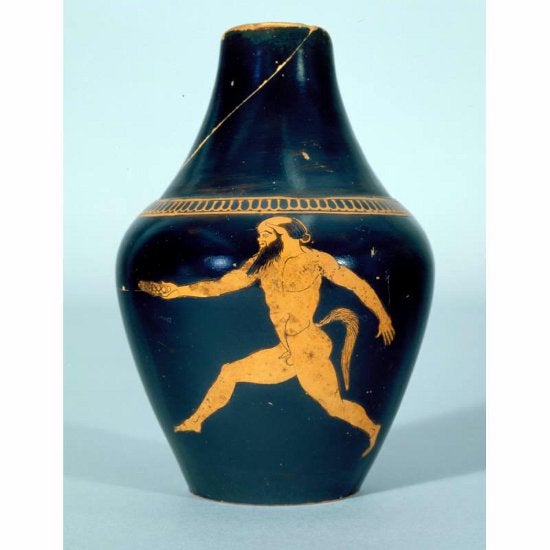 The pot shows a satyr in motion (running? springing?) from right to left. Without the word, you would have to say that the satyr's proper right arm and proper right leg are both extended before him, and his proper left arm and proper left leg are extended behind him, which is a mouthful. With the word, you can simply say "the satyr's limbs move ipsilaterally," which is shorter, accurate, and satisfying. I like this word a lot. So much so that I proudly told my wife that I'd learned a new word from a student paper. Turns out, my wife knew it already from yoga, and immediately predicted: "I bet that student is a dancer or does yoga, or both," as these are other arenas in which the word is very useful. A quick google also finds 'ipsilateral' used to describe the physical effects of strokes, another field where the term is convenient.

The visual analysis was written for my intro class, Themes in Western Art History, in which all the students had to analyze the composition of an ancient Greek or Roman work in the Allen. With the museum reopened there were close to four dozen works to pick from on display. This one's a real charmer. After distinguishing the spout's division from the body with a horizontal band of ornament, Douris placed the satyr's head directly below the spout, and extended his limbs ipsilaterally (!) so that he occupies all the surface space that a viewer can take in with one glance, without needing to turn the pot. When one looks closely, the composition's apparent simplicity reveals the design's intelligence. Discovering the painter's savvy is one of the rewards of close looking, and the chance to do that close looking was one of the satisfactions of grading these papers.

I had a professor take a moment at the end of class yesterday to express some heartfelt gratitude for the amazing discourse we'd just had regarding our latest reading. She said it was hands down the best class discussion she'd ever heard on the piece, and that she was incredibly pleased to be a part of it.

Sometimes I wonder whether instructors get more out of teaching than their pupils do.

I learn constantly from my ExCo students, and that class is only one section that meets once a week. I'm really jealous that professors have several classes several times a week that constantly feed the learning process.

Now, to only figure out how I will work the word "ipsilateral" into everyday conversation. It rolls off the tongue beautiful.

Reading the Oberlin blogs always leads to exciting discoveries! "Ipsilateral" is also particularly satisfying from an etymological perspective. In Latin "ipse, ipsa, ipsum" means itself (or himself or herself) and its superlative, "ipsissimus," is taken to mean "the very same." "Latus, lateris" means side. So if you put the two words together, ta da!, you get "the very same side."

@Ma'ayan, I wish we could meet several times a week as well! We all need time turners.