Yoshi and I were planning on leaving at 9:30am. By 9:50, our other two car riders were at our house, and we piled in and drove to Lorain County Community College.

On the way we postulated about traffic and parking. On North Abbe Road, before we turned off onto LCCC campus, most of the buildings had "Welcome President Obama" signs and American flags lining the roads. Surprisingly, there was no traffic in sight.

As we parked, I figured out how to carry all my camera equipment without a bag. On the official awesome ticket of awesome, we were told that we couldn't bring bags, umbrellas, liquids, and would be required to go through airport-like security. Cameras, however, were permitted, and it said so explicitly on the ticket.

I would like to make an aside to say that having cameras permitted and encouraged at political events is amazing. Maybe I'm paying attention more because I'm a photographer and old enough to care about politics, but I think that Obama's relationship with the media is progressive, admirable, and wonderful. People's president? I think so. Maybe it's the times, maybe it's publicity, but I love this encouragement of photographs. YES.

What this meant for me on Friday: I had a camera around my neck, a lens in my coat pocket instead of my hat, and a 3 pound lens in the kangaroo pocket of my Oberlin sweatshirt. I buttoned my coat up around it and looked kind of bulky and strange, but it was really, really cold. And we were in line outside for an hour and a half. We got in line at 10:30, finally got inside the security building at noon and thirty minutes later we were inside the field house.

I got a call right as Yoshi and I entered the building that led to the field house, from Anna urgently trying to find Chris. She had just been handed two tickets by an usher and they were hoping they'd get into the field house in time. As I finished the conversation, a volunteer came down the line and told us to empty our pockets and turn off all electronics including cell phones (more on this later) to go through security.

Our line mates were some wonderful local women, a bit on the raunchy side but fun nonetheless. Due to their rambunctiousness and airtight camaraderie, they elbowed into the eleventh row and dragged us along with them. Sitting between them was like sitting in a church on a good sermon day. They also kept insisting on switching seats with me so I'd end up with the best photos. I liked them.

So, the president. When he walked out, the women in the section next to us flipped out. Seriously. It was like watching Beatles fans be in the same continent as the Beatles. (Think that's before my generation? The Beatles Anthology documentary used to be my favorite movie...) There was much joyous shrieking and airgrabbing towards the stage when he walked out. I don't have pictures of the fangirls jumping, but I do have photos of the mass of cameras pointed at the stage.

There was an opening address, talking about the economy, health care, and the president's love of escaping the White House to travel the country. The floor was then open to questions, as this was a town meeting and all, and Obama chose a variety of audience members, from inventors wondering about international patents to students asking about federal grants and loans to senior citizens asking about Social Security to a single mother who was still waiting on the EPA to call her back about her son's lead poisoning (the president cut her off mid-question to say that now the EPA would probably call her within the hour. Ridiculous, but probably true) to a former felon who gave the president a poem for future reading. There was also a young fanboy who said his only question was if he could shake the president's hand. Obama said yes.

The entire morning and afternoon were tinged with excitement, which would have lasted throughout the day for me if my phone hadn't sung its last shrill ringtone and refused to turn on ever again as soon as I entered the field house. The evening ended with a trip to Walmart to get a new phone and then dinner at the Feve, because, above all else, Obama is a huge distraction from my cooking Winter Term project. On my food blog, Obama days have been marked with the non-dinner tag... a good non-dinner if you ask me.

Oh right, you guys will kill me if there aren't photos. Check out my Flickr album for even more pictures! 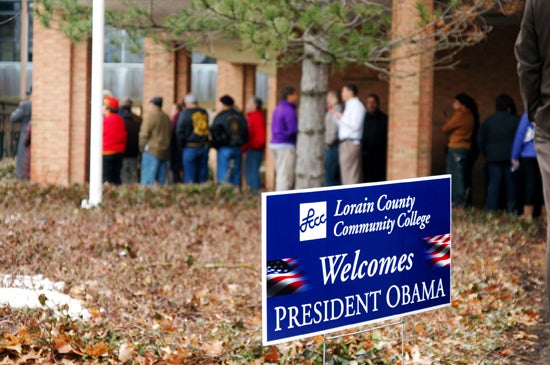 There was a big ole line. I was in it for a very very long time. 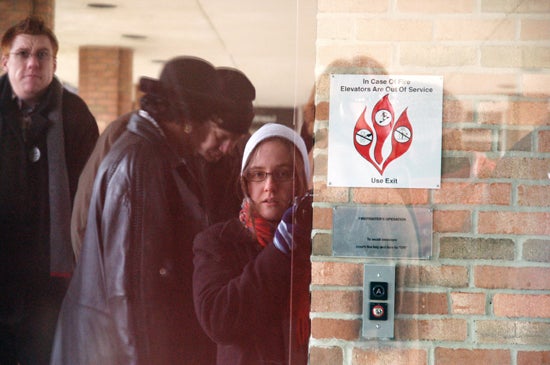 Also, very cold. I stupidly thought a lens in my pocket was better than a hat in my pocket. 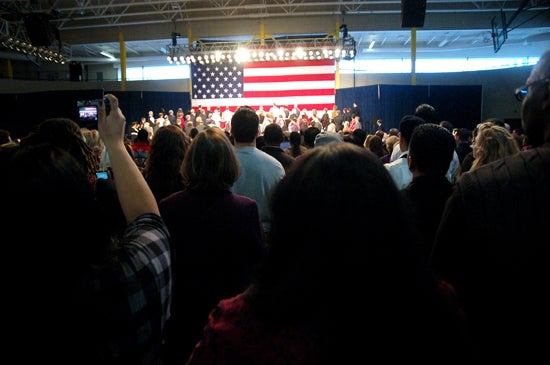 The stage was huge and well-lit. Yay photos! 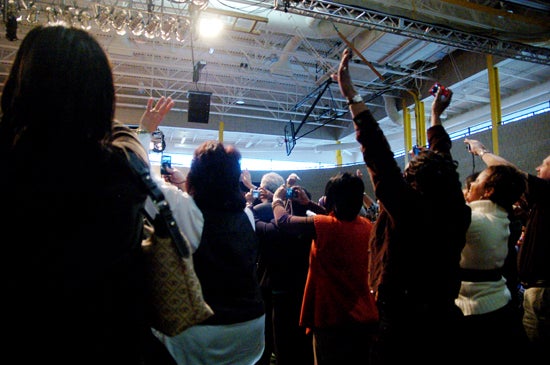 This was the OH MY GOODNESS! THE PRESIDENT IS HERE!!! section, off to my right. They are jumping off the ground. That woman is far too busy jumping to take photos. I, in fact, took a photo of her :P 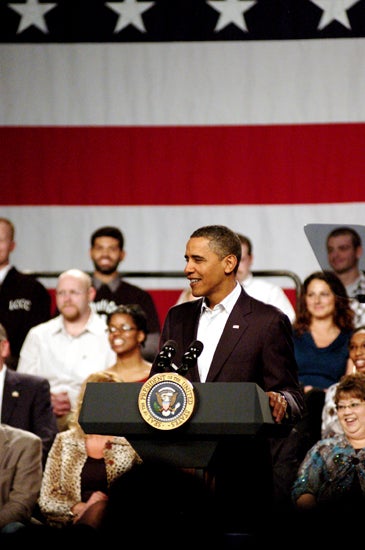 Super classy. This is what a press conference must feel like from the photographer's end. 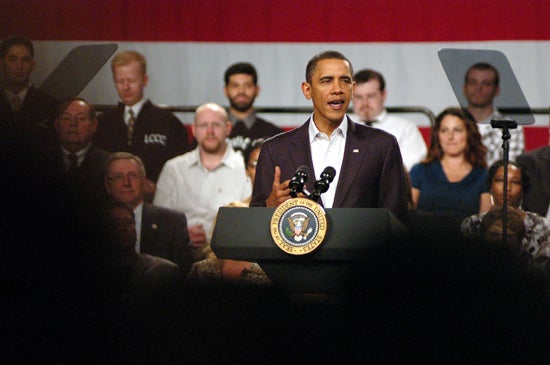 This photo is more accurate. We were 11 rows back and there were heads in the way, but not too badly. I think it gives the photo great framing, and this is one of my personal favorites from the day. 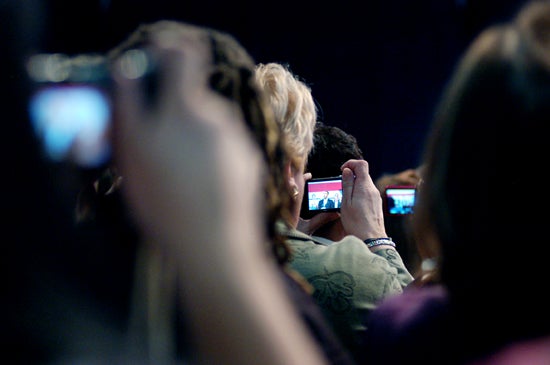 Did I mention that there were a lot of cameras? 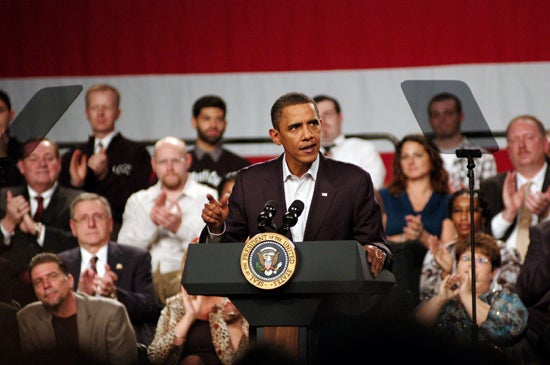 This is the president in serious civics-lesson mode. Pretty great to watch. 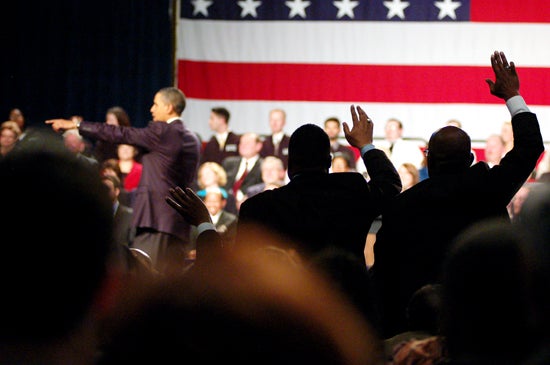 People got really psyched about the fact that he was calling on audience members at random. He alternated boy-girl to make it fairer.
**

- My food blog is getting more delicious by the day.

- I have managed to photograph several stop-motion vegetables, including corn, red peppers, carrots, potatoes (though I may have to reshoot them; white on white is extremely difficult), onions (again, I might have to reshoot them but it's too painful to consider right now). I've also figured out how to make this project into a happy medium between food and art and a happy medium between my ideas and my senior project committee members' ideas.

- I am spending some time thinking and talking with people about what I want to do next year. This is both exciting and terrifying. More on this later.

I love your photos! I also love the phrase "airtight camaraderie."

Congrats on your first presidential photos. Hopefully these are the first of many to come!

So cool! And your photos are fantastic, as always. I can't blame your phone; if I had been there, I probably would have died of excitement too.