Oberlin has the advantage of people hailing from all over the United States and the world. This means, however, that not very many people are familiar with the great state of Nebraska. I’ve received many confused looks and “Oh, wow!” when people hear where I come from.

This is an educational institution, so I thought I would help educate my peers about what life is really like in my home state. This blog post also serves the dual purpose of trying to convince myself that Nebraska is an adequate place to spend the next few months, when I thought I would be finishing up an amazing first year in Oberlin :’( 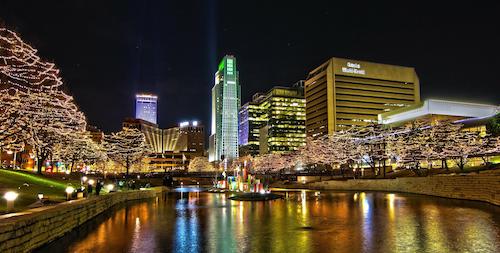 Nebraska is in the Midwest. Someone at Oberlin thought it was in the South. It is not. I’ll accept that the western portion of Nebraska is “the West,” but Nebraska is overall a Midwestern or Plains state. Nebraska is bordered by Iowa, South Dakota, Wyoming, Colorado, Kansas, and Missouri, which means that it’s very landlocked. In Nebraska, you can experience all four seasons! It is extremely hot in the summer, extremely cold in the winter, and nice for maybe about a week in between.

Nebraska is very much like Ohio: yes, there are cornfields, but there are also lots of things to do. I’m from Omaha, which is a real city with almost a million people in the metro area. Fun Fact: Memorial Stadium, which is where the Nebraska Cornhuskers play football, is the third largest city in Nebraska! This means it can hold more people than the population of the actual third largest city, Bellevue (or basically any other Nebraskan city besides Omaha or Lincoln, the capital).

The Nebraska Cornhuskers are also the state religion. You would think, by how much people love them, that they’re like a serious NFL team. Nope! Nebraska actually has no major league sports teams, and the Huskers are a pretty mediocre (Sorry, Nebraska! I still love you!) college football team from the University of Nebraska at Lincoln, Nebraska’s Big 10 school.

Omaha has lots of cool things that you might not expect. Our Henry Doorly Zoo is ranked #1 among all the zoos in the world, and as a child, I used to go there with my parents about three times a week. Omaha is the home of Boys Town, a well-known crisis relief organization for at-risk youth, as well as the birthplace of Omaha Steaks, a world-famous purveyor of the fruits of Omaha’s eminent industry of meatpacking.

We have four Fortune 500 companies headquartered in Omaha: Berkshire Hathaway, a big conglomerate that includes Dairy Queen and GEICO, among many others; Mutual of Omaha, an insurance company: Union Pacific, a railroad; and Kiewit, a construction company. This means that there are a fair number of rich people in Omaha, like Warren Buffett, the founder of Berkshire Hathaway, and the richest man in the world until he decided to gradually give all of his money to charity.

Omaha also has two major yearly events that bring in people from all over the world: the College World Series baseball tournament and the Berkshire Hathaway shareholders’ meeting. Both of these events create a super exciting atmosphere in the city (and a fair amount of traffic).

When people hear that I’m Jewish, a typical response is: there are Jews in Nebraska? Yes, there are! There’s a pretty vibrant Omaha Jewish community of about 8,000 people, a Jewish Community Center and Day School, and three or four synagogues, depending on how you want to count. Omaha is also the site of the Tri-Faith Initiative, which is one of the first places in the world to intentionally have a synagogue, church, and mosque on the same grounds.

Nebraska is actually the birthplace of the drink we know and love: Kool-Aid! It was first sold in 1927 in Hastings by Edward Perkins. Kool-Aid is the official state soft drink, while the state bird is the meadowlark, the state flower is the goldenrod, the state tree is the cottonwood, and the state dance is the square dance. But Kool-Aid isn’t the only All-American food phenomenon that Nebraska can claim: the TV dinner was also invented here in 1954. Nebraskans really know how to make a delicious and nutritious meal!

Nebraska is home to Carhenge, the iconic replica of Stonehenge, but made entirely out of old cars in Alliance, NE. The Sandhill crane migration is a really big deal for bird-watchers, and Nebraska author Willa Cather was inspired by the cranes and the gorgeous plains backdrop that they inhabit. The famous holiday of Arbor Day (which nobody except for people that took Nebraska History in 4th grade have heard about) also originated in Nebraska in 1872. Arbor Day celebrates the planting of trees. Nebraska is still a very agricultural state, and in some smaller towns, “Bring Your Tractor to School Day” is still extremely popular and observed.

Speaking of Nebraska history, this area was mainly populated by American Indians, including the Omaha, Winnebago, Ponca, Iowa, Otoe, and Sioux tribes. The name “Nebraska” actually comes from the Otoe words meaning “flat water,” describing the Platte River, which runs through the state. Traders from European countries were present in Nebraska, and the land was part of the Louisiana Purchase. Many people came through Nebraska on expeditions and on the Oregon and other trails to the West.

The territory of Nebraska was created in 1854 by the Kansas-Nebraska Act, with the territorial capital in Omaha. Fun Fact: my high school, Omaha Central, is on the same site as that territorial capitol building! The Homestead Act caused many people to move into Nebraska, and Nebraska became the 37th state in 1867. The capital was moved to Lincoln, and the new capitol building features a “golden sower” statue on the top that might be doing a little bit more than just sowing seeds.

Nebraska is overwhelmingly a Republican state, going red in most Presidential elections. However, due to our unique unicameral state legislature, where there is only one body in Congress instead of two, Nebraska’s five electoral votes can be split. The only other state that can do this is Maine, but state electoral votes have only been split in one election in Nebraska: the 2008 Presidential election. The electoral district around Omaha went blue for Barack Obama, while the rest of the state stayed red. That was pretty exciting, but gerrymandering by Republican state representatives has insured that it probably won’t happen again.

Nebraska has had many tourism mottos over the years: Nebraska: The Good Life, Nebraska Nice, Omaha: We Don’t Coast (Get it? Because we don’t have a coast?), and most recently, Nebraska: Honestly, it’s not for everyone. This was a huge media sensation a few years ago because it makes it sound like a place no one would want to visit. But the ads were all, “Beautiful sunsets, rolling hills, gorgeous rivers, but like, maybe it’s not for everyone.” 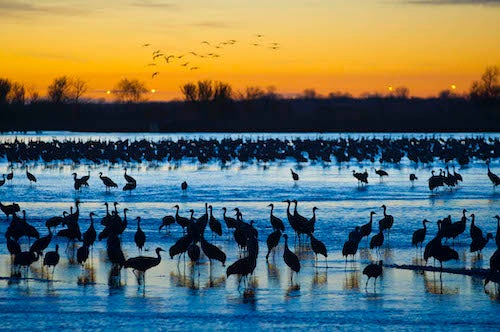 I hope you feel more educated about what you possibly previously thought was a “flyover” state, and that this blog gave you something to laugh or think about, instead of everything that's happening around us. And even though Nebraska isn’t quite as incredible as Oberlin, Ohio, I’m happy to be from here. I’m just extremely excited to go back to Oberlin in the fall.