Having spent the past week in Houston, steadily losing my immunity to the Ohio cold, I woke up this morning to thunderclaps, torrents of rain misting through the open windows. It's good to be back in Oberlin, actually - but then again, I'm the one who loves walking around in the cold rain without an umbrella, so long as I don't have to sit in a lecture hall, soaking wet, for an hour afterward. Anyway, since I'm spending the summer here, I went home for the break to sleep off a post-midterms cold and some astronomical REM debt.

Much of my spring break consisted of catching up on work, reading, and laundry, but the best part was the burrito bowl from Chipotle making chocolate with my sister while her cats shrieked for more food and the caramel burned. 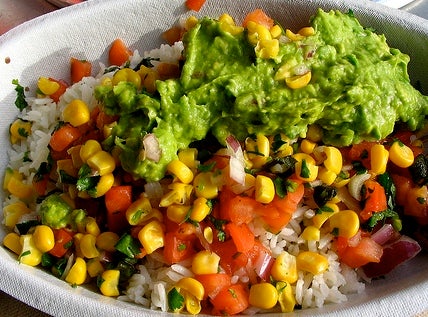 although it was very, very good.

This was my fault, sort of, as I was in charge of it. But really, I think the recipe specified a temperature that was way too high, because the caramel, instead of turning a nice brown color, went bitter and rather black. We threw it away and started on a second batch, which turned out pretty well before we abandoned the making of kitchen sink bars for the day. Incidentally, the name comes from the phrase "everything but the kitchen sink" and not, as I originally thought, from the sheer variety of ingredients being comparable to the contents of the kitchen drain.

Had we finished the chocolate coating, I think it would have looked something like this:

Instead we went on to make buckeyes, which are exalted forms of Reese's Peanut Butter Cups, I suppose. The amount of butter and sugar that goes into the filling is best left unsaid. The chocolate was kind of fussy, though, and after it was tempered it took considerable effort to keep it at the right temperature so that it didn't harden to leave whitish streaks in the chocolate. But it was worth feeling like chocolate was oozing into my pores by the end of it, because they turned out beautifully! 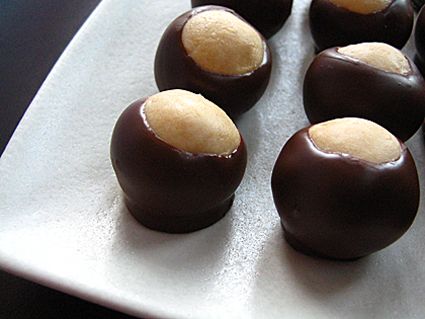 just not THAT beautifully.

So - welcome back to classes, everyone! And I brought back a few buckeyes, if anyone wants to try them...

Oh, buckeye candies are so so good. I've never made them before, but clearly, I should try.

Those are beautiful! They look so tasty.

love the choco & chipotle burrito bowls. we should go to chipotle together sometime. :)

Yes! We should! They were actually very nice and donated some burritos to our first AMSA meeting this year. =]