I like maps, at least inasmuch as they give me a decent sense of where I am. I’m the sort of person that likes to know where I am and where I’m going.

A couple days ago, I decided that I would take advantage of all of the free time I have on my hands and set out to Tigre, a city located in the delta of the Paraná River, a half-hour train ride from downtown Buenos Aires. I brought my camera along so I could take photos.

After wandering around the area near the train station and not finding very many interesting photo ops, I crossed a bridge onto one of the many islands in the area. I didn’t have a map of the city with me, but I figured that since it was a small place (and it was all contained within an island), I couldn’t really get lost.

But then I got lost. My nice stroll around town turned into a two-hour-long mid-day hike. While I was busy getting lost, however, I did manage to check out the gorgeous art museum on the island and, stumbling into a nice little park, I snapped some photos of some amazing bright orange bugs that I would not have seen otherwise. 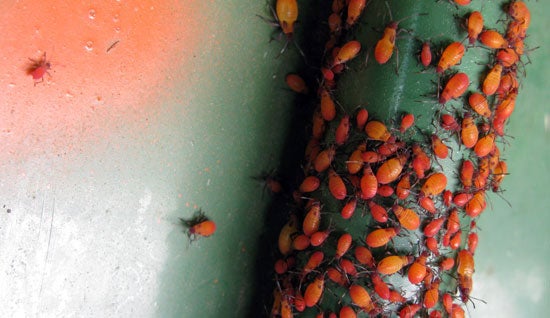 Eventually, four hours after I set out that morning, I found my way back to the train station and was on my way to Buenos Aires. All in all, it was a good excursion. I am glad I had the chance to explore Tigre.

Let’s imagine for a moment that I’m not just talking literally about geography. Exploration, after all, is an oft-used metaphor for education (that and Plato’s allegory of the cave). That brings me to today’s question: Is there a map for a liberal education?

If there is such a map, it might look like a page out of the Oberlin College Course Catalog, some dense document like “Graduation Requirements for the College of Arts and Sciences.” It could be the Composition Major Recommended Course Distribution Chart. Or, taking a more individual approach, it might be my 10-semester course planning chart (heartily recommended by the Double-Degree Student Handbook).

These maps leave me wanting. They are helpful and then they aren’t. My own education has thus far been marked by periodic diversions, some of which have led me down interesting side roads, some to dead ends. Introducing myself in my application to contribute to this blog, I wrote, “I am a Double-Degree senior this year. I’m majoring in Hispanic Studies and Composition, though I’m pretty sure I’m learning as much about cooking as I am about Spanish or contemporary music, since I was a head cook in Fairchild Co-op last spring and definitely plan to return next semester.” This is completely typical of an Oberlin student. Maybe a hallmark of a liberal education is that it is not mappable, that it has holes and dead ends and diversions and twists and turns…

This is a topic that I want to come back to in future posts. I have only recently become aware of how truly unique a liberal arts education is. Over the course of the past couple semesters in Argentina, I have had to explain (in Spanish, nonetheless) what liberal arts means to many Argentine friends who have simply never heard of the concept before. Indeed, majors at any of the universities in Buenos Aires tend to be very specific, spelled out so that students have very little freedom in choosing their classes. As a result, many Argentine college students have very little formal academic exposure to subjects outside of their majors.

For the record, my own excursions out into the universe without a map have been equally fruitful. Exploring the country roads around Oberlin one day in April, I was amused to see a toddler playing with his chubby pet goat. I’ve also found my way down that abandoned railroad track that Yitka and Nicolee and I’m sure many other Obies have discovered as well.

Great post, Chris. I hope you will return to this topic, since the notions of holistic learning and serendipitous connections are definitely central to the value of a liberal arts education. Looking forward to meeting you when you get back to Oberlin!

Chris! How funny to read this, and know that there is actually a map to an Oberlin education...and it's not just the graduation requirements.

Two years ago I was on a committee charged to create some kind of roadmap for advisors and advisees,and we eventually came up with this document. Check it out!

Lillie, I've actually seen this roadmap before, now that you mention it, although I think I must have just skimmed it last time. I'll have to give it a closer look.

And I'm definitely returning to this topic. I love learning about how I'm learning!