Remember high school science class? At Athens High School, we used to burn things in chemistry class, throw things in physics, and cut 'em up in biology. And we vaguely got the sense that in the real world, some dude or dudette in a beige-colored polo shirt and pleated khakis* was able to make a living from these concepts. Stephen Hawking's science career must have started like ours, with him burning electrical components with too much current and slicing up a preserved crawdad, right? But I had no idea how anyone made a living out of science, how scientists made that connection from classroom to application.

I still don't have a concrete answer, but doing research at Oberlin has helped me work out that connection. I've done research with various professors on-and-off for all of my three years at Oberlin. My second semester, I started doing research with Chris Martin, an astrophysics professor. I learned about radio astronomy, the Milky Way, LaTeX (the typesetting language), and grants. He also took me to California to study astrophysics, and we also went to a programming workshop last April in the Netherlands to learn more about HIPE, the computer language that the new Herschel telescope uses. I currently work for Jason Stalnaker, who is an atomic physicist. He uses a relatively new spectroscopic technique--a laser frequency comb, which is essentially a multi-colored laser--to measure energy transitions in atoms to high precision. We're currently working on measuring energy transitions in potassium. 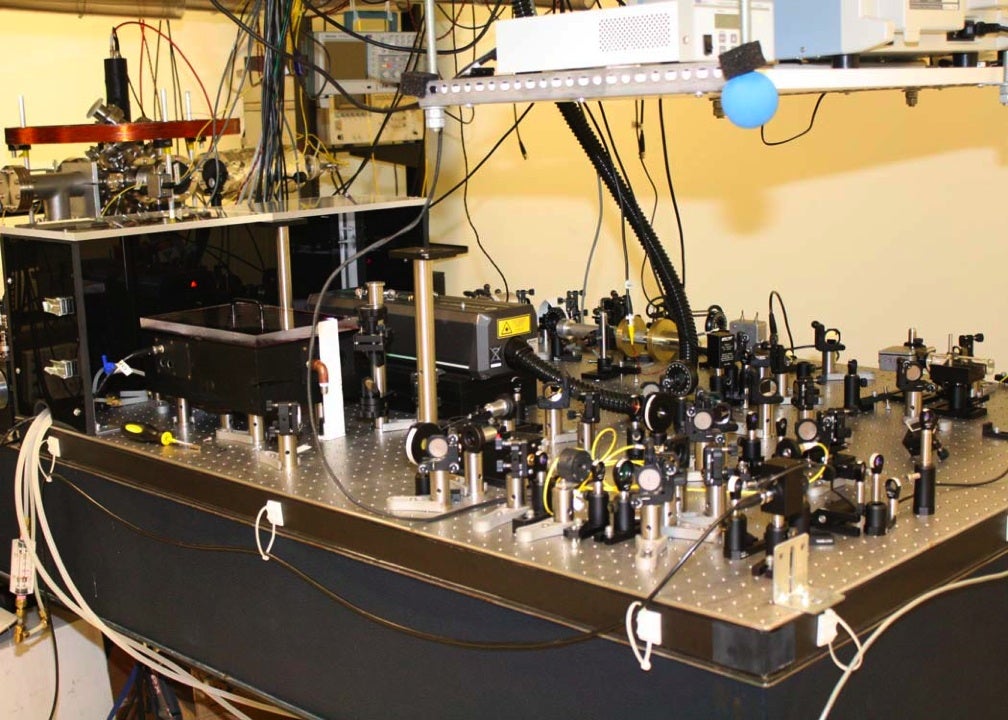 Our setup for the potassium experiment in Jason's lab. The longer rectangular box on the optical table is our pump laser, which we direct toward the squatter box in front, where the light hits a titanium sapphire crystal to produce our multi-colored laser. 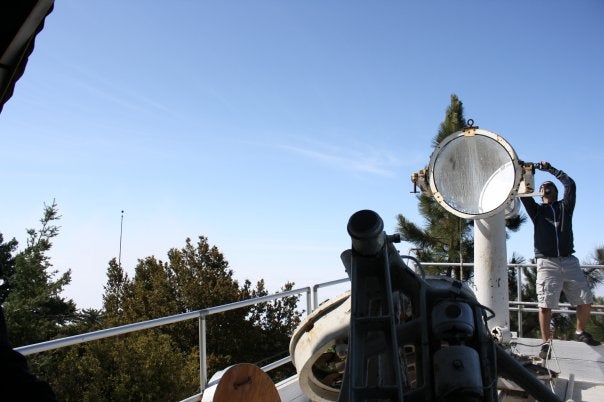 A solar telescope in Mount Wilson, California, that I got to play with while I worked for Chris Martin. In this picture, I'm standing in the body of the telescope looking out at one of the mirrors.

The opportunity to do research as an undergraduate has been a big part of my education at Oberlin. I have diverse interests, so I've never been completely sure if I want to pursue science as a career. Doing research has made the idea of a "career in science" less of an abstraction, and I know more about what I like and don't like about science. So to all of you who are interested in doing research, I've compiled a list of questions that I think would be useful for you.

*Sorry for generalizing about scientists' fashion. Not all scientists own a beige polo and pleated khakis. I just realized that I don't own either of them. I will get on that.

1.How do I start doing research with a professor?
Every professor I've ever met here gets super excited if you ask them about their research, so if a particular professor's work interests you, just make an appointment to talk to them about it. If they already have undergraduates working in their lab, it's likely that they'll take you on. Winter Term and the summer are great opportunities to do research because you can focus on it rather than schoolwork, but many people do research during the school year as well. I've usually discussed research with professors at the end of a semester when I register for classes for the following semester. It's a nice time to plan for the future.

2.How much experience do you need?
Zero, as far as I know. I started when I was a freshman, and I didn't have any research experience. I didn't understand any of the physics department's research, so I just decided to work with Chris Martin because I liked his teaching. It worked out well--he was a great teacher, so I learned a lot, not only about his research, but also about the scientific process. Also, he took me to California and the Netherlands to study astrophysics. That was awesome.

I'm sorry that most of what I just wrote is highly technical. If you're interested, let me know and I can venture out of the jargon and try to be less vague. As you can see, even in the physics department, you've got a lot of variety: astrophysics, energy-related physics, different types of spectroscopy, theory, optics, computer modeling...

Outside of the physics department, I'm sure there's a lot of variety as well. My roommate freshman year did some research in teen sexual behavior for the psychology department. Zoe also works for Professor Nee in the chemistry department. I'm not sure what she does, but it involves NMR spectroscopy. 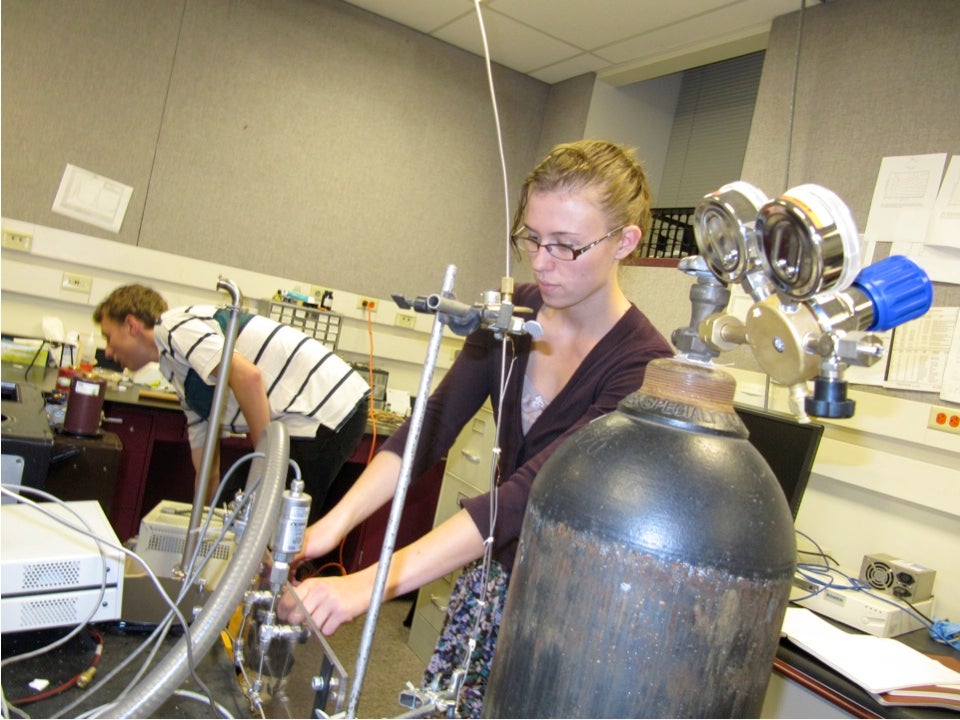 My friend Jenny, who works in Stephen Fitzgerald's lab, loading hydrogen gas into a sample in an infrared spectrometer.

4.Can I do research for credit?
Yes, you can do research for variable credit hours. In the physics department, you can get 2-6 credits for research. I'm currently taking research for 2 credits, and I put in about 5-6 hours a week, and it's pass/no pass (i.e., no letter grade, and thus, doesn't affect your GPA.).

5.Can I get paid to do research?
Yes, if you find the right professor! Some professors have grant money that's specifically allocated to paying students to do research. You can't get paid if you're getting credit for it, but otherwise, you can make research your part-time job! I did computer programming for Chris Martin during two semesters, and also over the summer after my freshman year. However, research as a Winter Term project is unpaid.

6.What other research opportunities are there?
A lot of my classmates do REUs (Research Experience for Undergraduates) over the summer. Basically, some schools offer programs just for undergrads to do a research project over the summer. It involves filling out applications, and if they accept you, they usually offer housing and stipends. I did a mini two-week-long REU on Mount Wilson in California, where I got to conduct a little project on the excitation temperature of the Ring Nebula. The trip had some nice side highlights as well--we looked through a 100-inch telescope, and I saw all nine planets in one night, even Pluto.

I also landed a research internship from NOAA (National Oceanic and Atmospheric Administration) for this summer in Hawaii, where I get to play with more lasers to measure the scattering of aerosols in the atmosphere. 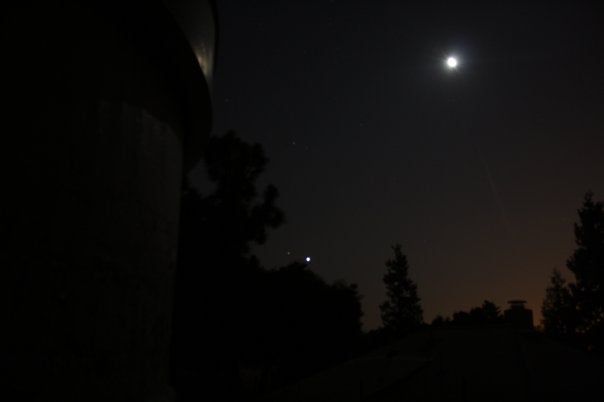 The moon, Venus, and Mars, in order of brightness, from atop Mount Wilson, where I had my mini-REU.

7.Why should I do research?
I think that if you're into the sciences, you should have research experience because it's a big possibility for your future career. Obviously, research isn't for everyone, but how will you know if you've never tried it? 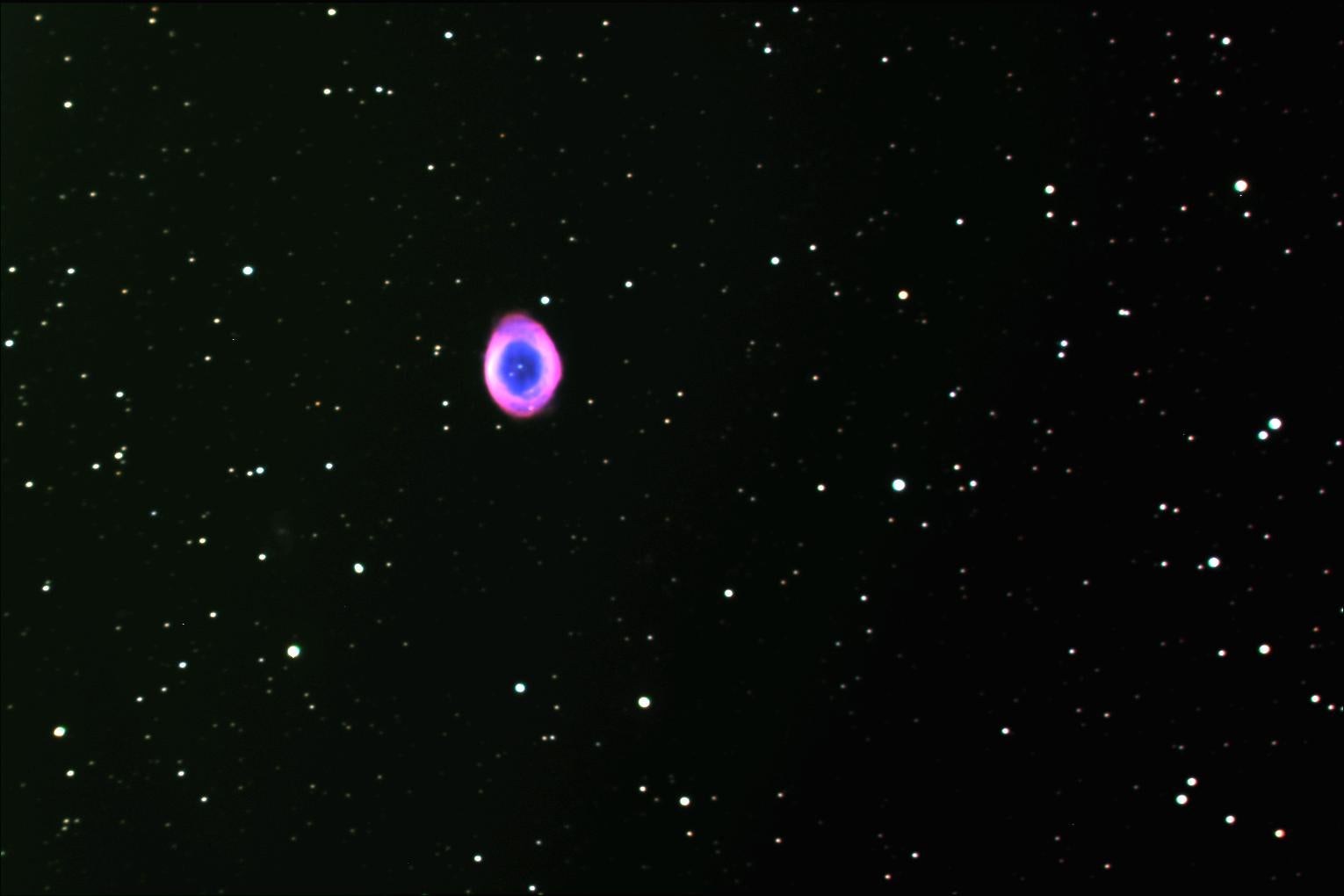 A false color picture that I took for fun of the ring nebula while I was on Mount Wilson.

I'm not sure what she does, but it involves NMR spectroscopy.

What does "false color" mean in regards to that last picture? It's so pretty!

Also, I didn't know you could sit inside a telescope. My small self sort of wants to do that, just to say that I have.

The last picture was taken by superimposing four different images. You take three different filters: red, green, and blue, and take three separate exposures with those. Then you do one with all the colors. Essentially, you could create a true color image of the nebula by looking at the ratios of how bright each image (R, G, or B) is. But I was too lazy and just messed with the color ratios until I thought it looked cool.

Having done research as an undergraduate, I can attest that it was very effective in preparing me for graduate school and a good job. There are still many questions to answer and discoveries to be made in the sciences. Keep up the good work.