Note: My original plan was to write about the best jobs on campus, but then I started writing about Tour Guiding and couldn't stop. Apologies. More soon. 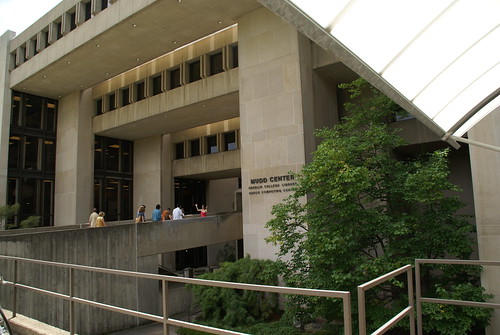 Advanced:
Despite having a Real Job, I still drop by Admissions on Friday and volunteer to give tours for Interview Days. The first time I went, I got a few polite versions of "But why are you here?"

Truth is, I love being a tour guide in the same way I care for circus, storytelling, coffee, and dancing. It makes me happy. The job is: share what you love while walking backwards, connecting with people from across the country and the world. What's more rewarding than that?

Yeah, it's not always great. Those tours where no one makes eye contact and no one asks questions? Then, it's a job.

But the tours with the really engaged, questioning visitors? Then, it's a joy.

I've been a tour guide since late March of 2006. I was hired before Spring Break so there could be more guides around for All Roads Lead to Oberlin, our accepted student visit program. Over Spring Break, I shaved my head. Short version: New Orleans, Katrina, gutting houses, lice epidemic, lice, electric razor, bald. Campus Visit Guru/Deity/My Boss Jen didn't question it, much to my great relief.

Starting out as the only bald tour guide was pretty sweet, but my first few tours were terrible. Explaining co-ops took way too long, I cursed rather extensively, stumbled through questions and fell over every dip and curb

But as I kept going, I started to really love it. What fight club would be for your body, tour guiding is for your morale. You start out a wad of cookie dough; after a few weeks, your rhetoric is carved out of wood. Nothing can scare you, no crowd can overwhelm you. You can talk for hours if necessary, answer any question.

Learning more about Oberlin was a pleasure. When I started tour guiding, I was given a practice tour hand-out and a handbook with information about each major. The practice page I memorized quickly, but the majors handbook was slow going, as Oberlin offers 50 majors. Still, with the determination... I memorized the smack out of those majors. I still remember the interdisciplinary aspects of the African American studies department and the goals of the Chemistry major (hint: it starts with R and rhymes with Beesearch).

It also gave me an excuse to ask everyone I met about the minutia of their lives because "The folks on my tour asked me a question about it."

Tours last 50-60 minutes. My route takes visitors from Admissions to the Art Museum, past town, through Tappan Square, into the Conservatory, past Talcott, into the Environmental Studies building, past Harkness and Dascomb, into Mudd. After Mudd, we go through the Science Center and up to the gym, and back down to admissions.

[Awkward omission: We don't really see King, the main humanities building. While King isn't earth-shattering, it's where I took most of my classes. Or, if I needed to finish something by tomorrow, I would climb over part of the façade and pound on the windows of the computer science lab. There was always a CS major there who was willing to open the front door. I remember one day during Finals when I had 2 tests in the building and ended up finishing a paper in the CS lab until the wee hours - I was in King from 9AM until 4AM. The building's grown on me.]

After giving hundreds of tours, I still love it. After walking to class every day, students forget that Peters looks like a fairy-tale castle from Hogwarts (Astronomy Tower?). Or that the Science Center, refuge to all, resembles a temple to the rational arts. I don't forget the grandeur of the slap-dash campus, the lovely incongruity of north and south campus, the way Wilder looks really epic from the front steps... Or that King and the Conservatory really do look like radiators.

Tour guiding is also a very people-focused job. The more I know about a prospie, the better I can do as a guide; if one of the prospies makes an excited face when I talk about environmental action on campus, I talk about that side more. There's a lot of details to talk about--I'd rather dwell on what interests you, rather than the other millions of stories and data I have. 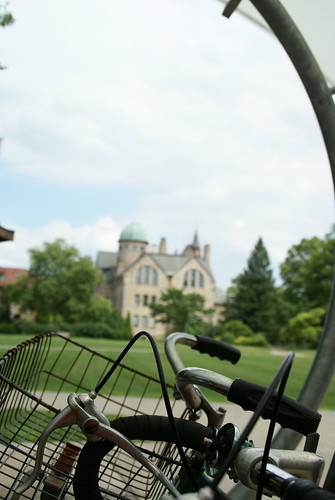 Between the Art Museum and Hall Auditorium, we always pass through the little covered leafy place. It's probably "the most romantic spot in Oberlin," so I make some little joke about young love.

"It's lucky we're here in the morning," I said, "And not when college students are really awake and amorous. Sometimes we walk in on couples being.... cute. Y'know, holding hands. Being lovey-dovey."

Two parents stopped. Stopped dead. They looked at each other for a long, careful second and kissed. This was an impassioned lip-lock--one of those side by side, arm around the waist deals. They sighed as they detached. Their daughter was utterly mortified as the rest of the tour applauded. I saluted them both.

I remember you mentioning that couple before... Makes me grin every time I think about it.

Also, I am totally going to regret not giving tours for the rest of my life.

Was your Dad a tour guide? I think he'd make a great one.

Best job on campus, hands down. I LOVE BEING A TOUR GUIDE!

Also, the kissing story? Too cute.

What a great post Aries--I am happy to see how much of an impact it has had on your Oberlin experience. We miss you around here!

Talk about kissing; I'm sure glad I kissed your Mom and 13 years later out you popped, and I do mean popped. You were born so quickly the Doctor barely made it for the occasion. I share this because I truly believe that your enthusiasm for life and your deep desire to share your love of life was apparent from the moment you came into the world. I'm sure glad you made it.

Yeah, I'm going through your old posts... he he

When I first walked into Jen's office after Spring Break right after you were hired she said "guess what, I hired a bald girl!" and was really excited about it :)