A summer of rain, then a gap in the clouds
and The Queen jumped from the sky
to the cheering crowds.

...We've had our pockets picked,
the soft, white hands of bankers,
bold as brass, filching our gold, our silver;
we want it back.

We are Mo Farah lifting the 10,000 metres gold.
We want new running-tracks in his name.
For Jessica Ennis, the same;...
for every medal earned,
we want school playing-fields returned.

...We saw what we did. We are Nicola Adams and Jade Jones,
bring on the fighting kids.

We sense new weather.
We are on our marks. We are all in this together.

From Carol Ann Duffy's "Translating the British, 2012". Here's some context for the final line.

London 2012: bring on sheepdogs, geese, dancing nurses (go NHS!), a massive sheet shaped like a baby being born, at least one out-of-context Shakespeare recitation, Voldemort defeated by a Mary Poppins army, Paul McCartney missing his cue, the queen jumping out of a helicopter (first cool thing she has ever done?) and the show stealer: Mr. Bean, conducted by Simon Rattle. 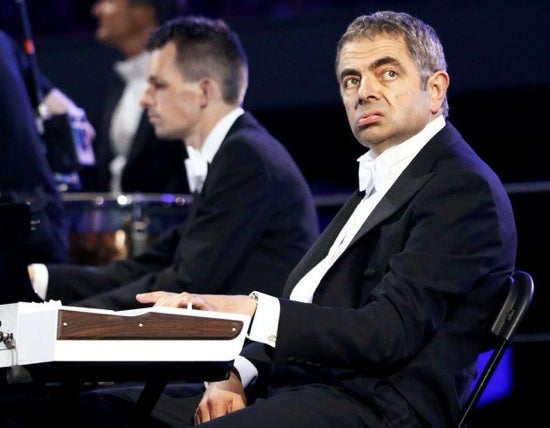 That was 27 million pounds you just witnessed. Romney thought we weren't prepared, eh? 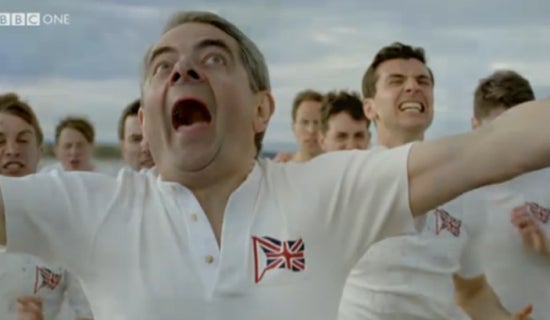 So, after all the stories about security failures, empty seats, ticket scams, terrifyingly bad mascots, warnings of 'one million extra people in London' resulting in everyone who actually lives in London fleeing (I am currently in France, where they seem to stop coverage of events when it looks like Britain's going to win and switch over to Greco-Roman wrestling) and the number of tourists in London actually decreasing during the Olympics, was it worth it?
Absolutely. For one reason: 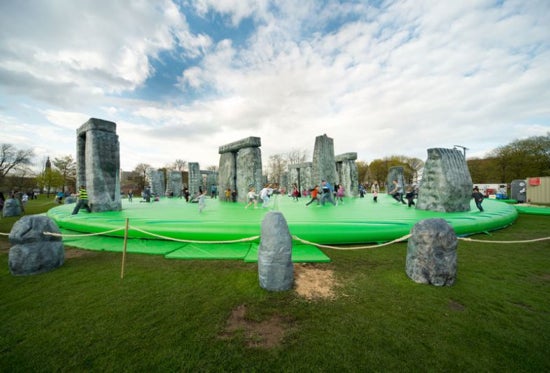 Yes, that is a massive bouncy castle Stonehenge! This work of art (and the modern art/circus ride divide grows ever narrower), entitled 'Sacrilege', was commissioned for the Olympics. Has money ever been spent better? The idea is, because people aren't usually allowed to get near to or touch Stonehenge, due to conservation doo-dah, let's let them bounce on it. It's touring Britain all summer. As far as I'm concerned, Lord Coe can do no wrong. Woo Coca Cola!... 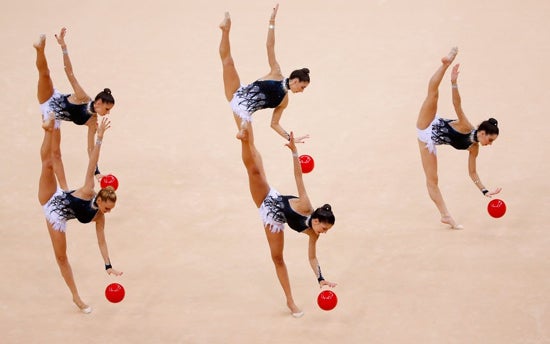 Please, why is this a sport? You know, I haven't seen any Jamaican rhythmic gymnasts...

Anyway, they don't tell you which countries you'll be seeing when you get the tickets, so it's just luck of the draw. When the schedule was announced, my mum looked it up and reported that we were seeing UK versus Uruguay - pretty good! Then I looked it up again to check and saw that that match was taking place in Cardiff (i.e. the other side of the world from us), not Wembley, and that we were seeing the match just below that one on the list: South Korea versus Gabon.

Well, I think it's way more exciting that way anyway. Only problem is, which underdog to support? Wonder how many pals the Gabonese dictator will bring along. I read in the papers that certain clothes aren't being allowed into the games, like team shirts in bad taste, e.g. and I quote, 'ironic Gabon shirts.'

Instead, my dad opted for an ironic Great Britain shirt. 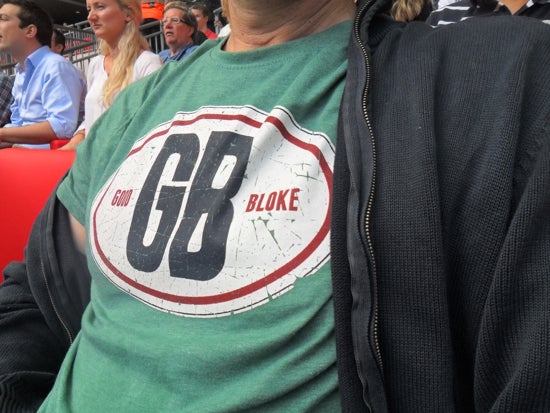 The crease makes it look like gold bloke or god bloke, but it actually just says good bloke. I'm not exactly sure of the joke but it is still very cute. 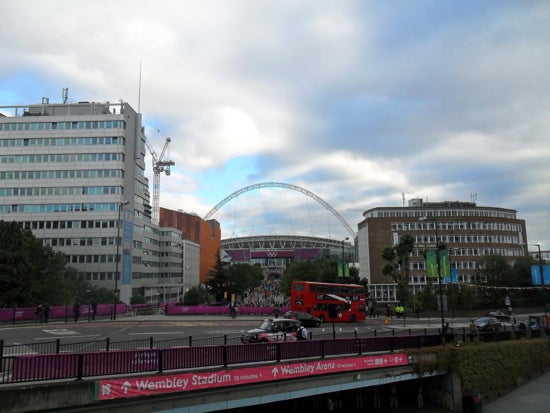 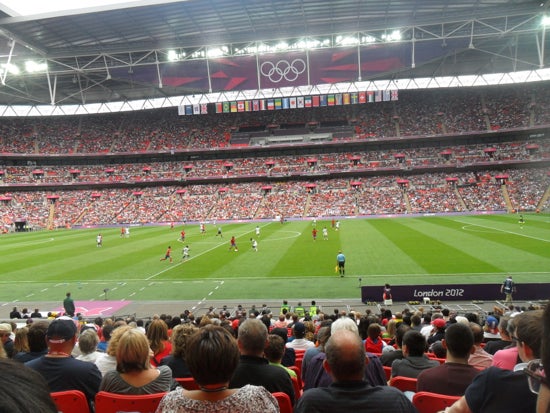 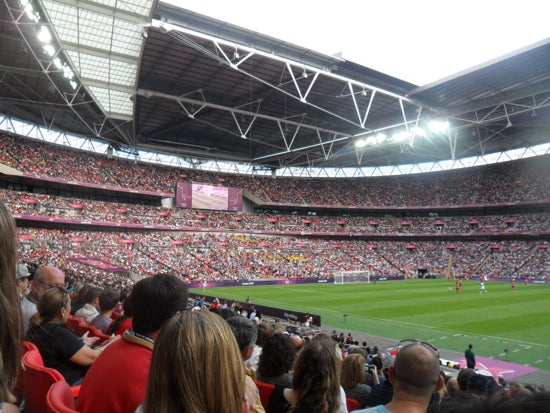 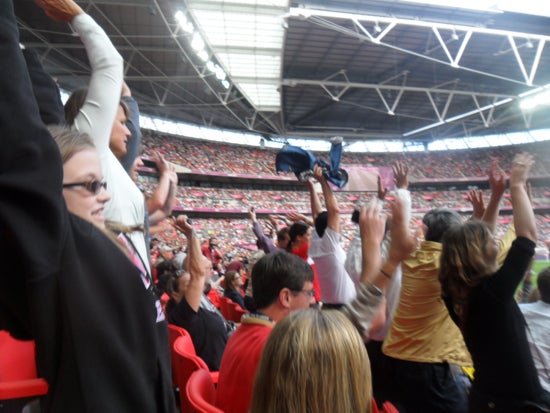 One of the many Mexican waves going round the stadium.

In the end it was a 0-0 draw, but Korea had won earlier matches so they got through to the next round. That's not even a proper win, is it? I demand a penalty shoot out! So when people ask me in years to come, 'Where were you for the London Olympics?' as the media keeps assuring me they will, I will be able to say that I really was there when Gabon drew with South Korea in the round before the quarter finals. And I also really did see Usain Bolt win the 100m sprint final, on TV.

If it were up to me, I'd give all the sprinters a gold. They ran very, very fast, didn't they? What's 0.2 here or there? Not worth the heartache. Some people just have longer legs.

Other Olympic highlights: speed walking. Are they running? Are they walking? Oops, that guy was disqualified - guess he was running. Or just walking a bit too fast.

Horse riding, especially when the horse loses its rider - 'and Gin and Fruit, of Canada, is still on the loose galloping round the course over by the water jump - competition has been suspended until further notice' accompanied by footage of someone trying to catch Gin and Fruit and missing as he sidles past. One day, a horse is going to win the Olympics solo, I just know it. And then, the horses will probably start riding the people.

I love/hate the show-jumping part of the Modern Pentathlon, where the riders, a lot of them not very expert, are given a strange horse to ride 20 minutes before the event, with only 5 practice jumps. They then have to compete. It's fun when the horses have the upper hand and just refuse to do anything, but painful too because I feel sorry for them for having such a dufus on their back. This happens a lot:

Shearwater Oscar throwing a South Korean rider (what are the chances?), Hwang Woojin, off a few days ago. The horse was fine.

The men's gymnastics. What an emotional rollercoaster. We (i.e. Britain - although I like to think that I personally play a pivotal part in the men's gymnastics team) think we haven't got a chance, then we win bronze - the commentators go, 'I can't believe it, we've won bronze! It's the greatest achievement we have ever had, ever ever!' and then the Japanese guy falls off the pommel horse and we are suddenly in silver position - 'Oh my god, we've got silver! No one can believe it! This is amazing!' (because silver is as good as gold when China's in the competition) and then the Japanese team appeals the score and gets boosted up 0.5 points - 'Oh no, we've only got bronze now. Damn, if only it had been silver. What a disappointment.' But we were ecstatic with bronze a minute ago, weren't we? I'm confused. 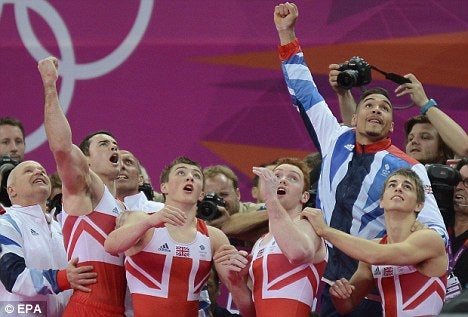 The gymnasts see they have won silver. They were later demoted. 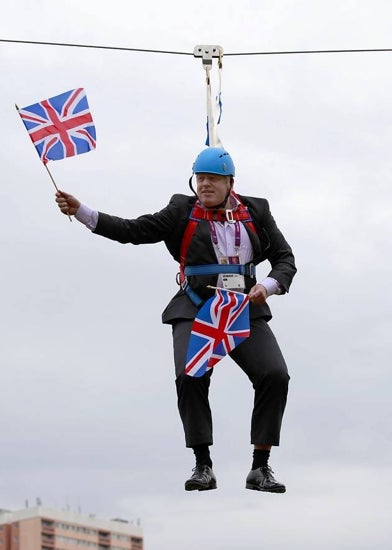 Mayor of London Boris Johnson got stuck on a zipwire. He was later rescued.

Because of the Olympics, there are thousands of extra cultural events going on in London this summer, and they're so much more accessible to the general public than the actual Olympics sports tickets - for me, they have definitely been the major benefit of having the Olympics here. I went to some great events at the Southbank cultural centre: a concert with Baaba Maal (Senegalese musician and activist) and poets like Lemn Sissay and a brilliant concert by Angelique Kidjo, one of my absolute favourite people.

She got us all up on stage, there was much dancing, and if you look in between the drummer and Angelique, you might see a familiar face (with a predictable expression).

I also got to see a concert by the unbelievable Simon Bolivar Orchestra, conducted by Gustavo Dudamel. El Sistema is such an amazing project and for me it really encapsulates what music should be all about: shared happiness.

This year, I was blown away by the quality of music at Oberlin - coming back to London, I've realised how good it is in Oberlin! Almost as varied and just as great. I feel very lucky to be part of a community of so many amazing musicians (students, teachers and visiting artists) all in one unlikely place. I'll try to link the next post to Oberlin a bit more convincingly. To be honest, Oberlin has had little impact on my past few months (apart from my wonderful friends, of course, who make me hate oceans), which was really what I needed after a non-stop Oberlin-y year. During the semester, there's not much space to think, because you're often so busy just 'doing'. It's sometimes felt like make-work, to fuel the continuous assessment (two words: music theory). But when the classes are good, they're really good. So I'm looking forward to honing my skills at scamming through the boring compulsory bits and spending more time on what I enjoy. Basically, less late night cramming sessions, more naked runs in the library.

Oh, I never got round to Rare Animal Featurette 3! It was going to be hairy and nosey, remember? Sorry, sorry! Here it is. 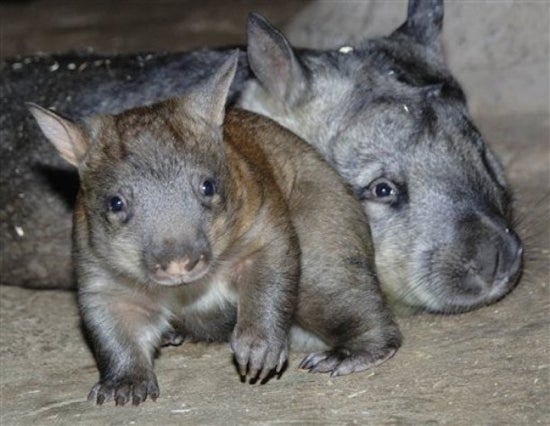 I quote from Wikipedia: 'The Northern hairy-nosed wombat's nose is very important in their survival because they have very poor eyesight so they can smell their food in the dark. The females are a little bit bigger than the males because they have an extra layer of fat.' Yes, sounds about right.

In 2003, there were 113 Northern hairy-nosed wombats in the world. They all live in 750 acres of forest surrounded by a predator-proof fence. Why has it got so bad? They are fussy eaters. I totally sympathise. Their grass got infested with some strange Africa buffel grass, which doesn't taste half as good, and they turned their noses up at it. The Northern hairy-nosed wombat: upholding food standards to the final frontier.

Also on the decrease is the equally cute Southern Hairy-Nosed Wombat. 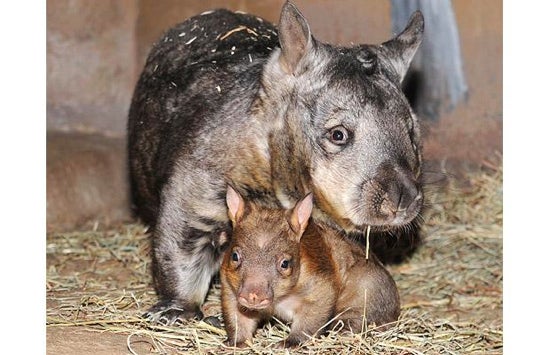 I had to go for the baby photos.

They also face habitat loss, disease, climate change, competition for food with the introduced rabbits and culling. But 2008 was a great year to be a wombat: an anonymous person left 8 million dollars to a small wombat charity in his will. In another life, secret wombat benefactor extraordinaire, marry me.

So all in all, summer's going great! This time last year it was riots and looting in London, and now it's riots of celebration. You could say we've gone from many torches to one.

I'll tell you a bit more about the first-year-of-college aftermath, your basic guide to post-traumatic stress etc. (only joking!) in the next post. Time for some couscous now.

Nice pics! My daughter went to Oberlin and I sent here to the Olympics for graduation. After that we will do whitewater rafting in Panama!

Oh my god, lucky her! I'm going to have to tell my parents about this...