I promise that at some point in the future I will stop talking about food. But not yet.

Time to keep those obesity levels on the up...YAY for Thanksgiving!

Wait - what is Thanksgiving? Coming from skinny little Britain (although it is true that in Scotland they all live on deep fried ice cream), I had no idea. If I said this, people looked at me in shock, as if I'd actually never lived, and the '24th of November' had just disappeared from my life - until now. Because once you have tried Thanksgiving, you are never going back.

The day before the feast, Oberlin emptied out for break (we actually get two days off school to eat? Yes!), leaving us international kids, plus a few Texans, rattling around in ghost-town dorms. We all prepared for the dreaded evening closure of the dining halls the next day. The Thanksgiving die-hards made plans to fend for themselves and bike back a turkey from Wal-Mart, which is two miles away. Luckily, I didn't have to resort to this, because 1) I'm vegetarian and 2) I already had a dinner invite!

This year, Oberlin has started a new program for international students, where they set us up with local Oberlin families for a Thanksgiving dinner. This is a fantastic way of connecting students with the community, and of course, of getting lots of free food! Food = friends.

The only downside to this adventure was that I missed out on what was rumoured to be a Stevenson Thanksgiving lunch extravaganza, complete with decorative pumpkins and table settings. I like to imagine that it was an actual Hogwarts feast, complete with owls and floating candles. We all know that the dining hall servers are secretly magic elves. I can just imagine Dumbledore clinking his glass over by the salad bar, while Hagrid munches his way through a tofu steak. After all, Oberlin is the real Hogwarts. 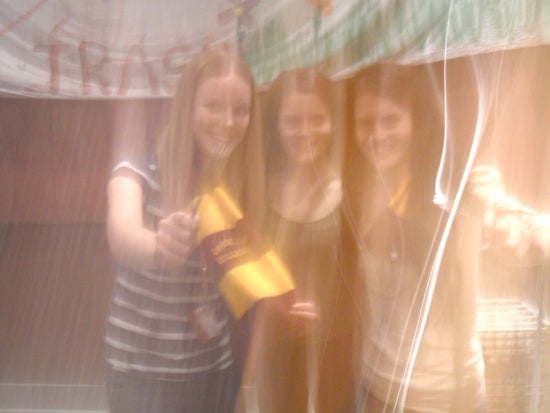 See, we have the official Oberwarts scarves and the knife/fork wands!! That looks like a Patronus charm Annie's got going there. Maybe a thin white snake. Or a tapeworm. 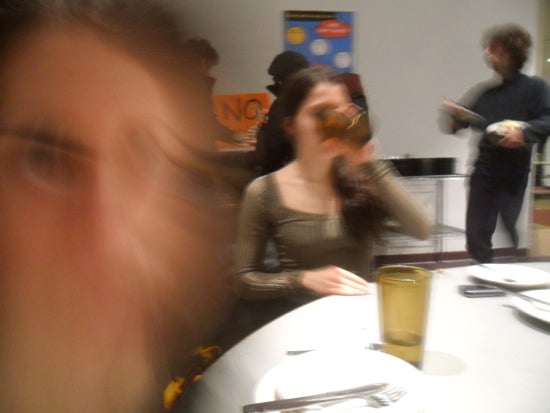 Jane, the remotely-operating death eater, sucks out Annie's face through her cup.

But I guess the Stevie witchcraft and wizardry will have to wait until next year. At 1pm, I cycled over to Katie, Greg, Chelsea and Julian's (roughly in age order) house on the other side of Oberlin. This lovely, apparently non-magical family (I'm not convinced - there was definitely a whiff of Polyjuice potion in the air) had very kindly invited me and two other international students to take part in their Thanksgiving linner/dunch experience. Let the gluttony begin! 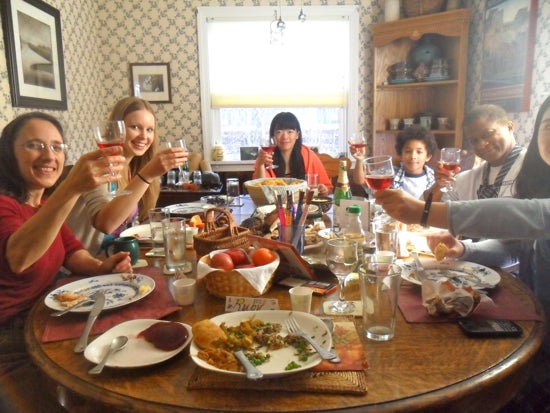 Everyone digging in. Yum! Notice Julian's really cute home-made place settings and the interesting cranberry jello-ish discs on the left.

I am thankful for... turkey - massive (OK, I would have preferred it if it was alive), stuffing, sweet potato (mashed up with marshmallows?! This is SO American! I'm not totally sold, but apparently many crazy people love it), vegetables, very special wild rice and amazing pumpkin rolls. These were home-baked pumpkin bread things. Hard to describe. But so, so moreish. They went perfectly with the home-blended fresh cranberry and orange sauce. Try it - cranberries plus oranges plus sugar, in a blender! Delicious. I should charge extra for this cooking genius.

There was one other Thanksgiving diner: 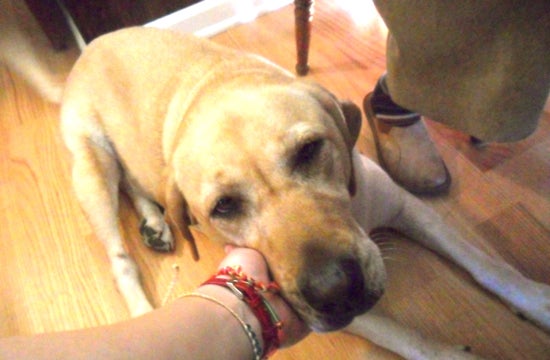 N'awwww! How could you resist?

Meet Bojangles. Bo for short - like (but not inspired by) the Pitbull song, apparently. (Who's Pitbull?) I would have thought of Bob Dylan but potato potaato. This gorgeous resident Labrador dog/witch in disguise spent hours staring up at us with her big googly eyes, desperate for some turkey. We restrained - she was already what you might call big-boned. Being a veggie, I wasn't on her radar much anyway. But Katie, on the other hand: 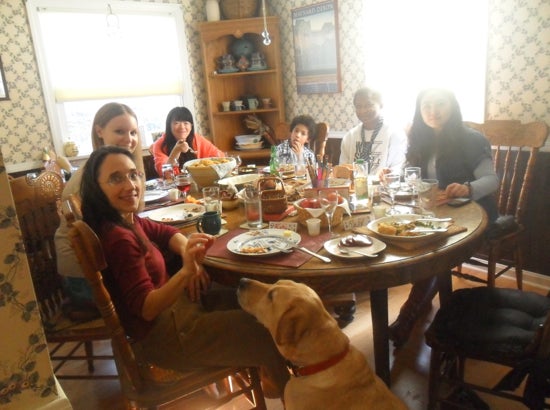 It turned out that Katie had actually spent a year growing up in England. Whereabouts? Cambridge. Me too! Where in Cambridge? Owlstone Road, literally 100 yards from my house!! (I really hope there are no stalkers reading this.) She had even gone to the same primary school as me! How crazy. It's a small world after all. It's a small, small world. Yep, the real point of this blog is to get annoying songs stuck in your head. I tried comparing teachers but then realized that there was a bit of a time difference between when each of us attended. Still, it was super cool. Supper-cool!

Katie continued the coolness by revealing that one of her ancestors was on the Mayflower (one of the first boats to come over to the US or something). Apparently, he was a drunk and kept falling overboard on the voyage, but someone always pulled him out again and somehow he made it to America. So, here was a real-life descendant of one of the first Thanksgiving partiers! That's got to give this dinner some serious credibility.

...Umm...didn't the pilgrims kill a load of Native Americans? My US history knowledge is non-existent, but I have a feeling that it wasn't all lovely-jubbly. Oh well, let's just keep on eating...

It was time for the legendary Pie Exchange. Katie had saved the best for last. This is family thing, but it is a crime that it is not a nationwide - no, worldwide, tradition. She had baked about ten massive pies, all in different flavours. In her own words, 'you have to enjoy doing it.' No joke. Each diner got a pie of their choice, cut it into eight pieces and began trading with other people. We all ended up with a droolicious patchwork pie to take home - or eat then, if you could stuff it in. I have a totally separate dessert stomach, so that was no problemo for me. I started with pumpkin pie, obviously. Although right now, I'm still in the aftermath and I'm not sure that I ever want to see another pumpkin pie again. Actually, that's a lie. Anyway, the rules were, you had to swap at least half of your pie for other pies, no feeding pie to Bo and no magic spells at the table. 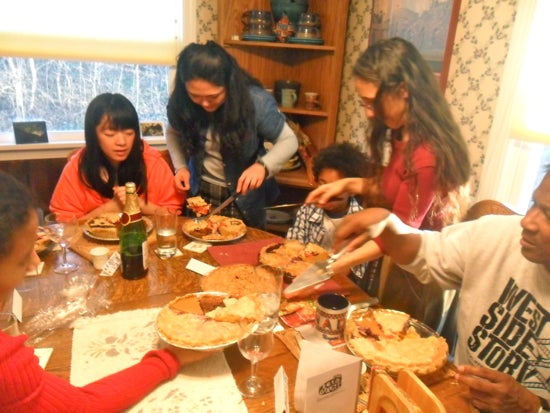 Action shot of pie-brokers in full bartering swing. I don't know about the rest of the economy, but it is a wonderful time to invest in pie. 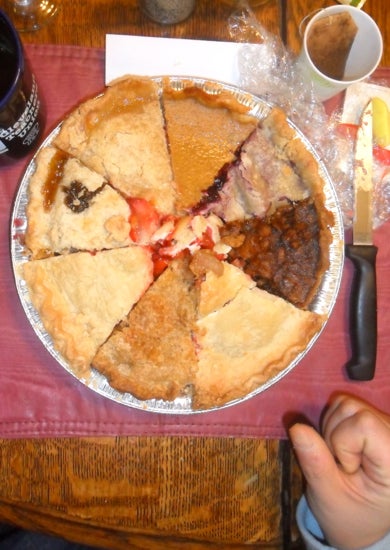 Is this a dream? From top to top, right to left to right: pumpkin, blueberry, pecan, blueberry/raspberry, apple, rhubarb/strawberry, mock mince and apricot. I love the clenched fist - so much pie desire. Also, the knife: suggestions of violent pie actions to come. God, this picture is so delicious it's painful.

All too soon, the end was upon us. Both of my stomachs were stretched to breaking point. I gave up trying to swallow, felt my heart break a little bit and resigned myself to the fact that
T h a n k s g i v i n g w a s o v e r . 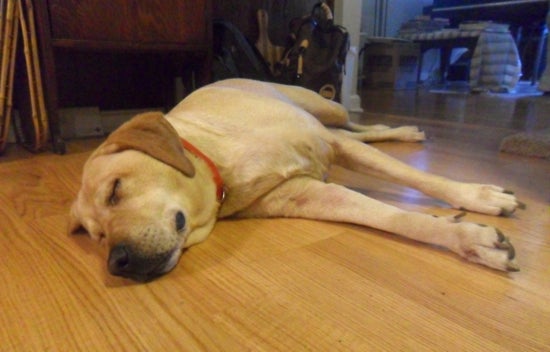 What a GREAT day! A perfect little pre-Christmas warm up for the digestive muscles. And the deliciousness just kept on going, because I had pie/pumpkin roll leftovers in my room for ages - probably too long, considering that I don't have a working fridge. But a little bit of pie condensation sweat/greeny stuff never hurt anybody...?

All in all, Thanksgiving is the best excuse for a national holiday ever. 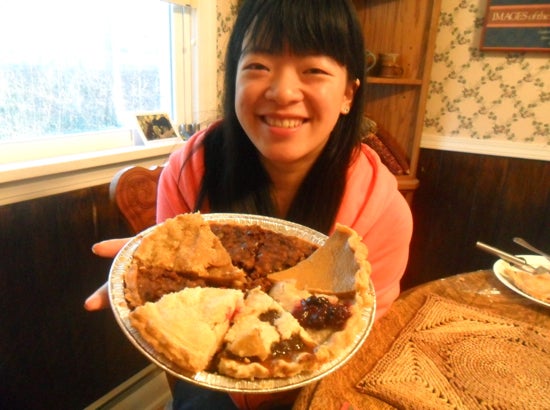 A fellow international diner with her prize.

So, in the spirit of Thanksgiving: to Oberlin, for arranging this wonderful event, and to Katie, Greg, Chelsea, Julian and Bo, for welcoming me into your home and making my week - Thankyouthankyouthankyou! Many hap'pie' returns! And I'd be up for giving thanks again any time that suits!

Mother says I was an eater before I could walk
She says I began to eat long before I could talk
And I've often wondered, how did it all start?
Who found out that nothing can capture a heart
Like a melon can?
Well, whoever it was, I'm a fan.

Wait, your host family is the Cross family?! I LOVE THE CROSS FAMILY. ALL OF THEM. I will tell you all the wonderful things about them next time we see each other. Every single thing about them that I have experienced is totally fantastic.

Also, the pie exchange is possibly the best thing I have ever heard of.

That’s no tapeworm! The Patronus Charm is advanced magic, clearly mine is still in the incorporeal stages. I’m only a first year at Oberwarts, after all.

Also, dementors suck souls, not deatheaters. And you call yourself British!

But don't worry, the pie song makes up for everything :)

AWWWWW love these pictures! Miss the time we spent together!