It seems only a few weeks ago that I was trying to get myself psychologically prepared for the start of the academic year, and now suddenly I'm in the last throes of paper-grading. It never fails to amaze me how quickly a semester passes, especially in the last month or so, when everything seems to shift into overdrive at once. Often it's only when classes have ended and I have a chance to take a couple of steps back that I realize there's something magical about the way a bunch of randomly selected students, many of whom have never met previously, has coalesced over the course of a semester into an organic group, the whole of which is much greater than the sum of the parts.

The chemistry of a class is always unpredictable and slightly mysterious to me. Since I teach mainly by discussion, I depend heavily on the students to be interactive. I work hard to achieve an open and mutually supportive atmosphere, but a great deal depends on the students' willingness to seize the responsibility to participate productively. Happily, this semester the gods of the registrar's office showered me with good fortune: I had three groups of terrific students whom I felt privileged to get to know, and who seemed to thrive on the lively interchange of the classroom.

My advanced course this semester was a class in contemporary British and Irish drama. The pace was swift and the challenges considerable: we studied 14 plays, ranging from the hyperrealism of Edward Bond and Mark Ravenhill to the visionary landscapes of Samuel Beckett and Sarah Kane, from the passionate intellect of Caryl Churchill and Tom Stoppard to the mordant wit of Harold Pinter and Martin McDonagh. The class was primarily composed of English and theater majors; this is a mix that occasionally doesn't gel, but in this case it proved terrifically energizing as we moved back and forth between textual and performance concerns, benefitting from the various perspectives brought to the table. There rarely seemed enough time to discuss all the issues at hand among this animated group, but that seemed to me a measure of success, since I always think of the classroom as a place where questions should be opened up rather than definitively answered.

One feature of this course is that all the students, whether or not they have any acting experience, are required to rehearse and perform a scene from one of the plays in the week in which we're discussing it. I've occasionally taught classes when, either because of inhibition or inadequate preparation, a particular scene fails to come to life. This semester, however, that was emphatically not the case; week after week I was impressed by the degree of commitment and enterprise in evidence: long scenes impeccably memorized, often rendered in credible accents (not required!), and, most importantly, carefully explored and prepared. The scenes added a great deal to our sense of how dramatic texts make specific use of the medium of performance.

This class is intended to introduce students to the rich and complicated literature that constitutes British and Irish drama of the last 50 years. My hope is that it will also persuade those who don't already to share my passion for the theater. I just heard from one of the students, who stood in line for two hours in sub-freezing weather in New York to get into the last performance of a production of the Sarah Kane play we studied, so that's a promising sign....

My other teaching this semester was devoted to two sections of my first-year seminar, "Crossing Borders: The Mysteries of Identity." As often happens when I teach two sections of the same class, they each had very different personalities, especially at the outset. 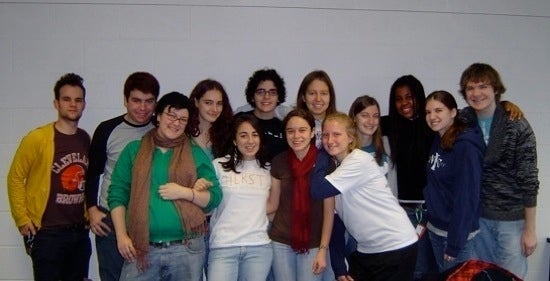 The morning section was a rambunctious group right out of the starting gate: feisty, dynamic, occasionally volatile. The challenge was to get them to listen to each other and keep the conversation on track, but they learned to do that expertly and valuably. 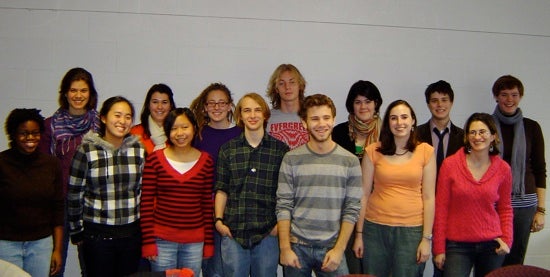 The afternoon section was an exceptionally thoughtful and reflective group. Initially they were much quieter, and for the first few weeks I felt as though I was having to do too much to lead the discussion, but after we confronted the issue, they really stepped up and took responsibility for setting the agenda.

Both groups were a vivid reminder of why I love teaching at Oberlin: the students were bright, well-prepared, passionate about what we were studying, and keenly engaged in learning from each other.

Since I blogged earlier about my own expectations for the course, I thought I'd turn the rest of this post over to the students to give you their perspective. I asked them how they'd describe their experience of the program to prospective students, and here's how a few of them responded:

The semester won't be over for me until I finish reading all the final papers, but I'm looking forward to the relative quiet of Winter Term. And, of course, to next semester's classes...

This was so much fun to read! Oh how it makes me miss our group. For the general reading public: I was in the "rambunctious" Mysteries of Identity section (I'm the girl in the green sweatshirt). And feisty is definitely the word to use. It was fantastic!

I also really enjoyed reading what other people had to say about the class, and the FYSP program.

(David, I can't wait for you to read our final papers. I'm eager to get them back, even though it won't be until basically February for some of us.)

It's fun to recognize some of my CRWR 120 students in those first-year seminar pictures! I'd love to see your syllabus for this course, DW. (Or sneak in myself.)

Hi David! Is there an RSS feed for your blog alone? I've tried linking you on our blog, but it redirects to the Oberlin Blogs main page.

Hi, Chris! I know absolutely nothing about RSS feeds, but I'm told by my homeboy Ben that there's just one feed for the blog homepage. But the student blogs are much more interesting than mine anyway... Hope all's well in LA.

Oh how I miss our seminar course in this new semester!