I have a journal of sorts. It's a little book my girlfriend got me as an auxiliary birthday present to go along with a funny 'ghost tour' of Asheville, NC by bus (DO IT IF YOU EVER GET THE CHANCE). It's called 'Q&A A Day,' and for each day of the year it has a question that you can answer. When I was still being good about doing it every day, I had a bit of a hard time answering the question: "Are you a teacher or a student?" If I were filling out a census form, I would most definitely answer 'student' (if I filled out census forms. Yeah right, and let Big Brother tattoo his barcode on the back of my neck? No thank you).

But I am playing the role of teacher some these days. I've been the teacher occasionally in my life. I started as a fifth grade 'buddy' for a kindergartener (but trust me, we were not friends), impressing her greatly with my cat-drawing skills. I taught swim lessons to four-year-olds when I was a teenager, wrapping pool noodles around their little bellies and sending them floating down the lazy river. I moved up in the ranks, teaching fifth and sixth graders at a summer camp before moving back down to watching 2-5-year-olds at a day care in the year between high school and college. Honestly, the young ones were more fun, despite their low scores on 'getting my jokes' and 'ability to keep what should be inside their bodies inside their bodies.'

Now I am teaching people my own age in the Obehave!-sponsored Core Skills Improv Workshop. It's weirder. 4-year-olds respect you automatically because you're bigger and you're a 'teacher.' College kids taking ExCos actually do the same thing. There is some kind of automatic credibility given to people labeled teachers. I have a strong impulse to prove that I should be a teacher at times, mostly by talking a lot in class. Even if I know that this isn't what is going to help the students out, it happens. 'Look how much I already know about this subject, folks.' It's a lot easier to tell than show in this case. 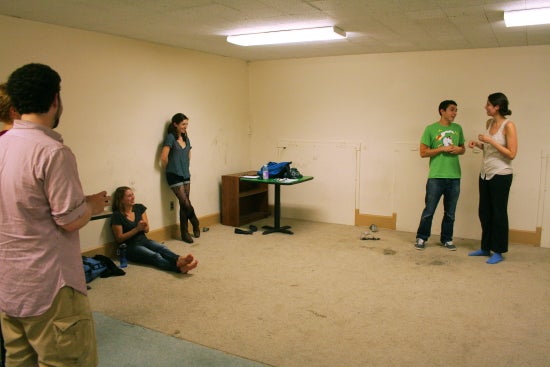 Obehave! member Matt does the make-em-ups with new member Rachel in a dirty, carpeted room. Oh we got new members! Sophie is a new member also featured in this picture. Also boring old members Greg and Lexie.

Last Saturday's class in Starlight Lounge was preempted by an array of HP enthusiasts playing Wizard's Chess in the same space, so off to the Kahn 1st floor lounge it was for us. After playing around and being truly silly for about a half hour, we talked a little about goals for the class and took five minutes to share what our biggest fear was associated with improvising. 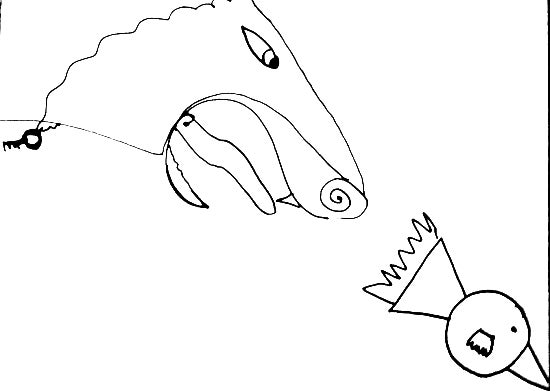 An "Improv Sketch" we made today. Each person makes a single line on the page with a Sharpie and passes the paper to the next person. This Hades-born dog is chasing after a rocket bird. He has a key around his neck because Natalie thought the bird was a keyhole at first.

One thing I want to do as a teacher is foster bravery in the students in the class, although I'm having a hard time thinking about how to do it exactly. Telling someone to be brave can be scary itself; I hope we can make a force field around wherever we're practicing that can serve as a place in which people aren't afraid to make mistakes. I don't want to see their best stuff in practice always, but I do want to see them try their hardest. And be silly. One needs laser sights attached to their clown wigs. Am I trying to do too much? 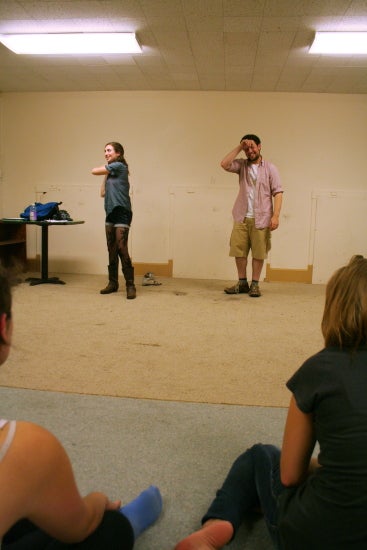 I need to inject some Buddhism into my own improvisation. In Obehave! practices and performances, I'm seeking some kind of mysticism that I may or may not be able to find. I want to make something magical every time I get onstage. During our 'sexy' show a couple weeks ago, I kept looking at what was going on with other improvisers and saying, 'No, don't do that,' 'Oh, you should have taken that and done this with it.' I could hardly enjoy myself. I don't really have a sense of how I'm doing as far as improvising, I tend to forget everything that happened when I was onstage as soon as a scene ends. People tell me that my improv is funny, so I'll take it. I'll just keep trying to sprinkle pixie dust over my scene partners and make us fly into some magical improv realm where scenes are perfect and hilarious every time.