One of the plusses of living in a beautiful European city is that people are more willing to visit you than they might otherwise be. 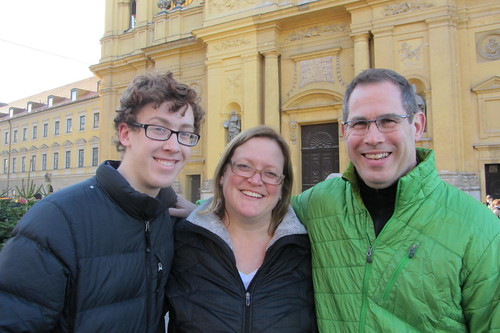 I kid, I kid, but I have had more people visit me in the last month and a half than in my two years at Oberlin combined. First my parents and my little brother visited for 11 days, including Christmas and my birthday. Our travels took us to Dachau, Oberammergau, two of King Ludwig II's castles, and Salzburg, Austria, but we spent most of our time in Munich and I loved getting to show them around. 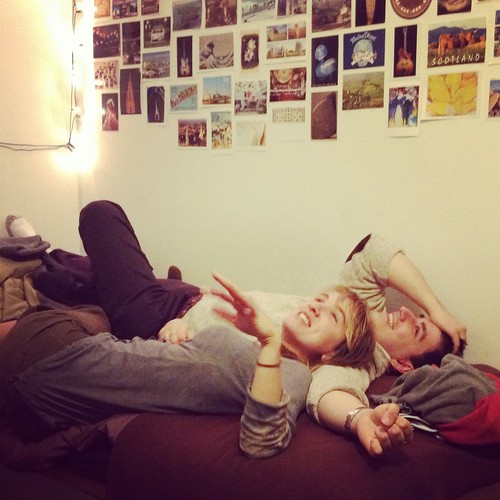 Conor and Emma hanging out in my room

Then about a week later some of my friends from Oberlin came to Munich. It was great to catch up with Emma, Emily, and Conor (who was allowed to come along even though his name doesn't start with 'Em') and as an added bonus, I got to play tour guide again. But in showing my friends and family around the city, I realized something - I actually don't know Munich all that well. 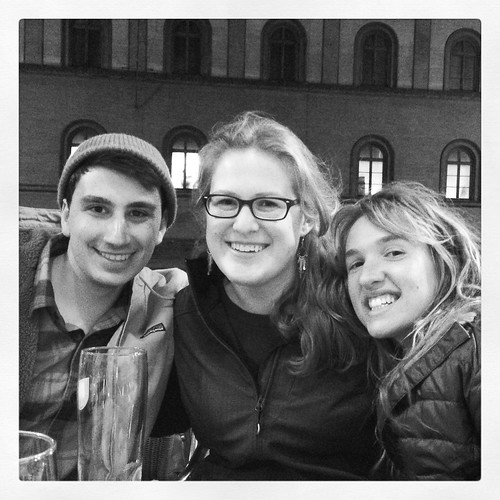 Conor, me, and Emma at Café an der Uni, a student restaurant near the university

Let me qualify that, I can find my way around Schwabing (the neighborhood where I go to class) and the Innenstadt pretty well, and the U-Bahn system is simple enough to figure out where you're going while you're getting there. I've visited enough museums and landmarks to keep anyone interested in history or art entertained for a few days, and of course, it helps that I speak German. But after that, things can get a bit dicey.

For example, I thought that I knew where Milka World was just by checking the address, only to find out that I definitely didn't, which led to my family wandering around in the dark for 15 minutes before finding it. Then there was when I realized that I hadn't been to a single vegetarian restaurant in Munich and I suddenly had a vegetarian and a vegan to feed. Or there was when I walked by the Potato Museum four times in the rain before realizing that it was inside an office building. Simply put, although I've lived in Munich for more than four months, I still have a lot to learn about my new home. Since coming to that realization, I'm so glad I chose a yearlong study abroad program. 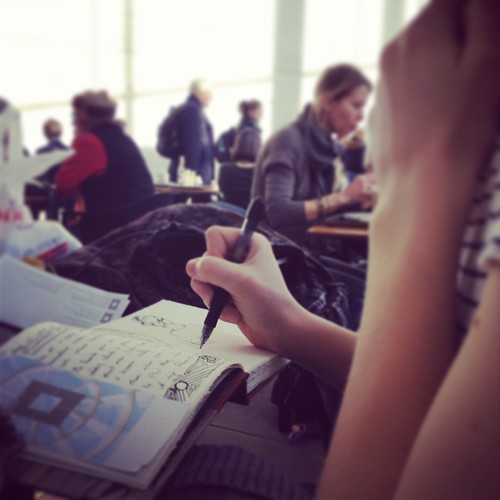 Emily after a visit to the Pinakothek der Moderne

So why did I originally decide to apply to yearlong study abroad programs rather than the more popular one-semester options? First and foremost because my main goal for study abroad was to improve my language abilities to the point that I could write, speak, and do research in German without too much difficulty. Coming into my program, I took a placement test modeled on the Common European Framework of Reference for Languages (CEFR) and tested as a B1. In non-technical terms, that means that my German was decent enough that I could basically understand things I read or heard but that there were very few things I could talk or write about in a complex or sophisticated way. No matter the level of immersion I had, there was no way I could've achieved my goal in one semester and I knew that coming in.1 Hence why I didn't even apply to any one-semester programs.

A couple of people have asked me how I felt about essentially deciding to leave Oberlin for a year rather than a few weeks or months, and I'll be frank, I didn't really think about that until I had already committed to leaving.2 Instead I thought about what I could gain by studying abroad.

Oberlin is comfortable for me. It's a small town, I know where I like to go, who I like to see, and I have a routine from which I seldom deviate. I love that about Oberlin and I actually think that degree of comfort in my outside-of-class life helps me to push myself academically, but of course I feared stagnation. I didn't want to find out what would happen if I got too comfortable, and I knew that studying abroad and living in a big city would keep that from happening. 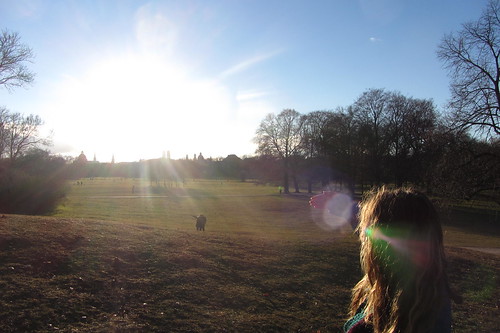 Emma in the English Garden

Sure enough, moving to Munich definitely forced me out of my comfort zone, but rather than making me feel insecure, it's actually been kind of empowering. When my friends visited, they said that I seemed happier and more confident, and when my mom was here, she said that I was "definitely in a good place." They're right - I'm happier than I can ever remember being, and the knowledge that I've made a life here makes me feel secure. I don't know if I would feel that way if I were heading home in a week, when my first semester ends. I could be wrong, but I imagine I'd feel like an extended visitor.

As it is I feel like a resident of Munich, a resident who gets lost and doesn't eat out very much and probably should explore neighborhoods that aren't Schwabing a bit more, but has a life here and tries to push herself when she can. And you know what? I wouldn't have it any other way. 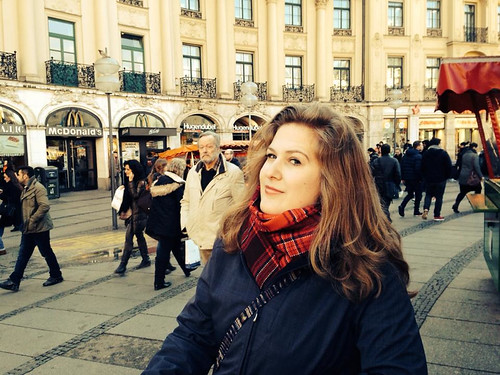 Shoutout to Conor, who took this photo of me post-Currywurst at Karlsplatz


1To give you an idea of how much progress I actually made over the semester, I took the same sort of test a week ago and got B2-. That probably doesn't seem like much, but apparently that's a bigger jump than the program expects in the first semester.


2I think the particular moment was when I saw that Jen Bryan would be teaching a class called Ovid in the Middle Ages and it occurred to me that I wouldn't be able to take it.