Oberlin is coming alive! I've been holed up in my apartment since the second of January, and I've gotten used to walking around campus without harassment from people I know, without seeing that guy from my philosophy seminar, without wondering how I'm going to get around the gaggles of freshmen who insist on walking in clumps that take up the entire width of the sidewalk.

Of course, it isn't as bad as all of that. A couple of weeks ago, I caught myself making a passive-aggressive comment to a lamp in my apartment (yeah, you would be on...); clearly, I've been starved for human contact. As friends and friendly acquaintances trickle back to campus, I've found reason to use my vocal chords, which surely have atrophied from being used only to berate inanimate objects and TV personalities.

But lest you think I've become a total hermit, I have had people over this break. Most notably, Winter Term has given me the opportunity to throw dinner parties in my spruced up apartment. Three times now, I've had a few friends over so we might hunker down together, eating and laughing while the snowy wind buffets my windows and doors.

But what was I doing for Winter Term? I didn't undertake a project for credit, but that's not to say that I didn't have projects: I've been doing some freelance web design work for a documentary filmmaker; I've been blogging at my personal blog, Ich Bin Ein Oberliner; I've been doing some home improvement projects—putting up shelves, building bookcases, and making a coffee table. 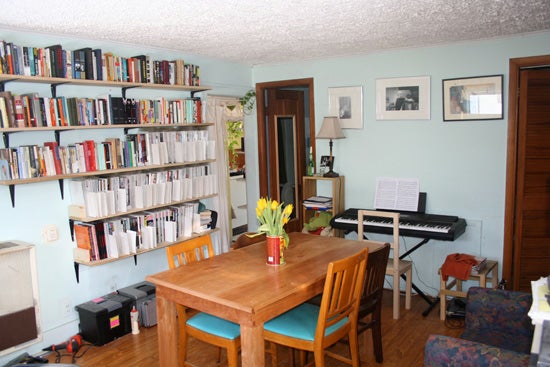 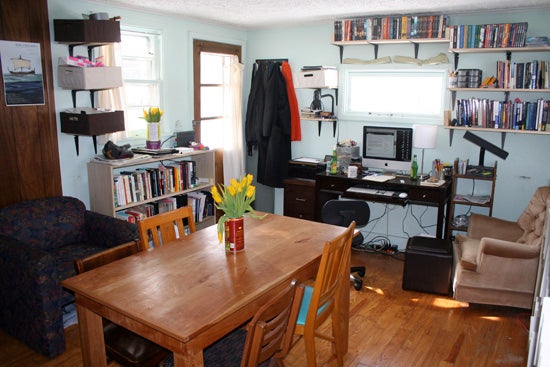 I've been practicing for two upcoming gigs (I'm playing Cantata 106 with the Minnesota Bach Society in March—which will be on MPR—and I'm playing Brandenburg 4 with Lyra Baroque Orchestra in April); I've, miraculously and gloriously, had time to catch up on books, magazines, comics, and TV shows I simply didn't have time for during the school year.

I've also been enjoying my new table, which was made for me by my friend and excellent carpenter Enrico Nassi, who took the woodworking class here at Oberlin and now can make awesome furniture: 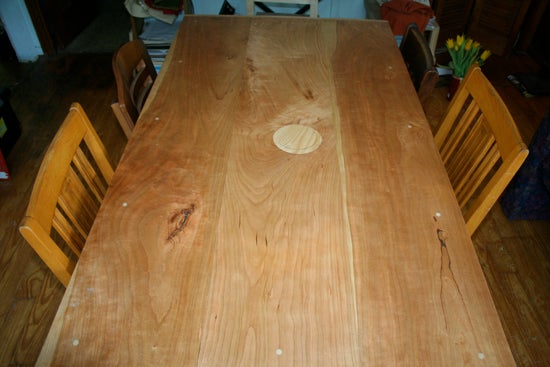 After reading about Karl's project, I kind of wish I could do kickass stop-motion animation. (By the way, Karl, that is awesome.) I won't lie, though I haven't been blogging here, I have been reading what other people are up to, and, as usual, I'm blown away by the crazy and cool projects my fellow Oberliners get up to; go read (Zoe) and read (Sam) and read (Helena).

I'm sure you're all wondering what it was that prevented me from blogging regularly (Actually, aside from my boss and my parents—hi mom!—I doubt too many of you were wondering that). Well, wonder no more: 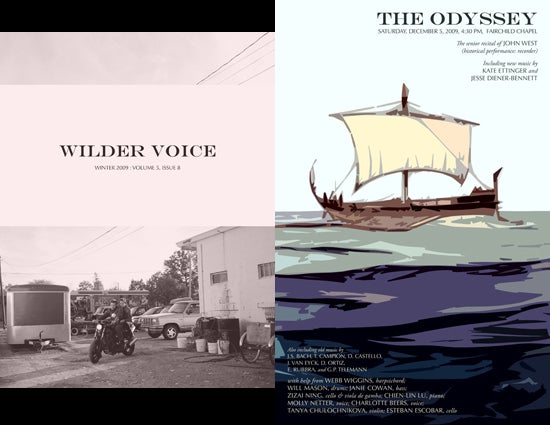 This year, I'm the editor-in-chief of Wilder Voice, Oberlin's magazine for long-form journalism and creative non-fiction. We also publish one faculty submission, one piece of fiction, several short dispatches, and a smattering of poetry each issue. For two years, I was managing editor, and I knew that Heather, then the editor-in-chief, worked hard, but I had no idea just how much work it is. I think this issue came out well, and I've heard mostly positive things from the grapevine. If you're on campus and you didn't pick one up, we kept about fifty in reserve, and we're going to put them out in Mudd (the main library) tomorrow, so keep your eyes peeled.

I also had my senior recital. It was about an hour of music, and I tried to give it a narrative arc based on Louise Gluck and Thomas van Nortwick's readings of The Odyssey. It included the excellent drum stylings of fellow blogger and terrific musician Will Mason, a world premiere of a piece by Oberlin composition major Kate Ettinger, and several near-mental breakdowns by yours truly--seriously, trying to get nine musicians, two professors, and one composer to schedule rehearsal times is like herding cats. Said one of the musicians involved: "You looked like you were having a good time, but you also looked like you could snap at any moment." Pretty much true.

Here are some clips for those of you who so desire them:

[this video is no longer available]

[this video is no longer available]

("Odysseus: Tales for the Phoenicians I" From Nine Ricercares on Tenores Italianos by D. Ortiz [1510 - 1538] with Webb Wiggins, harpsichord; Will Mason, drums; Janie Cowan, bass; and John West, recorder)

If you're wondering if this post represents my pseudo-triumphant return to blogging, the answer is yes. Aries (my boss) will be pleased to know that I have about a third of my next post already written. Look at me, on top of my shit, it's almost like I'm a professional and not a browbeaten student two minor crises away from losing it. Almost.

Oberlin has a woodworking class?! Tell me more, because I would not be averse to learning how to make a table like yours.

Oh, it certainly does. It's taught through the art department, down in the shop in the basement of the art building. I, myself, haven't taken it, but a lot of the work that's come out of it looks awfully nice. My neighbor has a poplar lamanate table that's really beautiful. There's a bench made out of an felled oak that I saw.

It seems like a cool course, and I think it's offered each semester.

Dear John,
I love the way you write. It makes me smile. Please write more things for The Grape.