Per usual, I'm behind on the times and have yet to give any information about what I'm currently doing for Winter Term. For those of you who somehow missed the memo, it's Winter Term and we Obies are scattered around the globe doing intellectual, activist-y, and just plain strange stuff. Super neat, I know.

While I'm totally grateful for the extended period of time Oberlin College affords us to reassemble our respective brain space (I feel like I have scrambled eggs for brains after every semester), Winter Term (WT, January Term, J-term, etc.) gives me anxiety. In the midst of fallsemestercrazytimes, I absolutely do not feel like I have a spare second to send emails, scour the web for opportunities, and breathe life into the Winter Term plans of my Obie dreams. So this past semester, I just didn't. At all. I did not do one Winter Term related thing until about November 25th, one week before Winter Term applications were due. (Jan Thornton is going to kill me if she reads this. She specifically told me not to wait until the last minute. Fail.)

Nevertheless, come November 25th, I kicked it into high gear. For me personally, J-term is all about location. It cannot be cold and it must be exciting. As much as I love home, I spent the duration of my first Winter Term in South Florida and nearly fell off the deep end (one morning I woke up and so passionately learned to sign, in ASL, the entire first verse of "Endless Love" by Lionel Richie and Diana Ross...the Glee version.). Last year, I was yet again in Florida; and, because I was working on a college campus, I was still experiencing things as a college student (lame). This year, I wanted to get out of Florida and immerse myself in the 'real world.'

So after a year and a half, I decided to return to my other favorite coastal city, San Francisco (The summer after my freshman year, I spent ten weeks doing research at the University of California, San Francisco. Great experience.). 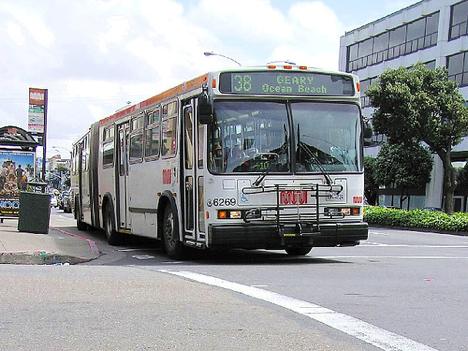 Chillin' in San Francisco, ridin' on MUNI and stuff. To be fair, this isn't a completely random photo. I took this bus last weekend to get really good dim sum.

Location decided, I made a few phone calls and was informed that a particularly well-known health clinic was the place to be. After a few more phone calls and a couple of emails, I had the framework of a potential project (volunteering at said health clinic). Perfect. Home free. I turned in my Winter Term application and booked my flight. Done.

By the time I had finished my finals and the semester, and arrived at home, I realized I hadn't heard from my contact person. After emailing and calling repeatedly, on January 4th (two days before I was scheduled to arrive in San Francisco) I concluded that I had officially been duped. Okay, so I wasn't deceived per se, just given false Winter Term hopes and dreams, only to have them sift through my fingers like tiny grains of sand (Please laugh. My mock seriousness is supposed to be funny). Point blank, I had a plane ticket and no project. Womp womp.

Stuck between a rock and hard place, I turned to the Oberlin staff for assistance. Not that you don't already know this from my past blog entries, but I'm obsessed with the staff at Oberlin. As a whole, they've honestly got to be some of the world's most helpful intelligent people (You don't know of any intelligent people who aren't helpful? I do.) . With two days left until my west coast arrival, I emailed Asher, Oberlin's LGBTQ community coordinator, for help. Either Asher is a really big deal (I mean, he is. I just Googled him and I'm super impressed) or Oberlin's name carries some serious weight in the world (I mean, it does), because after the two of us sent emails to several organizations, I GOT RESPONSES. After a promising telephone conversation, I was able to schedule a meeting with another organization for the day after I arrived in SF. My six-hour plane ride may have been miserable (I was sitting in the middle seat. Boo), but at least my mind wasn't racked with worry.

After meeting on a Saturday with the volunteer coordinator at my new, super-promising J-term opportunity, she informed me that it would "take a couple days for her to find projects for me." My response: "Um, okay. That's totally cool." And so I waited.

On Sunday, I was a portrait of put-togetherness and was thrilled that I had secured a project.

On Monday, I gabbed on and on about how my first day of work on Tuesday was going to be so awesome.

On Tuesday, I went for a very long run and reassured myself that I everything was fine. I also set out my clothes for my first day of work on Wednesday.

On Wednesday, at 9:47 am PST, I sent a very professional, collected email to my contact person:

I just wanted to check on the status of things and maybe tentatively figure out when I'm going to get started with you guys. Thanks so much.

I then proceeded to obsessively check my email for the rest of the day.

On Thursday, I went for another extremely long run. During this jog, I was in a state of sheer terror over the thought of unemployment. I managed to convince myself that this was the actuality of the real world. I would spend weeks, months even, distraught and worried out of my mind, waiting for the phone to ring and for someone with a sexy, Denzel Washington voice to tell me I was employed. After working myself into a tizzy (I ran four whole miles. Shh, that's a lot), I took a shower and proceed to call the telephone number of every organization on the web that was based in SF and looked remotely interesting. I think I must have sounded super pitiful, because I talked to several human relations representatives who apologized for the 'unfortunate situation' I was in. Still no project.

On the brink of throwing a temper tantrum, I remembered that yet another organization, the San Francisco AIDS Foundation (SFAF), had responded to Asher and me via email. Because I thought I was totally set to go with Organization #2, I had just emailed the SFAF contact person back and turned down the opportunity. I quickly sifted through my email, found her phone number (set aside my pride), and called the SFAF contact, Emily. Not only was she so extremely understanding of my 'situation,' Emily was the most helpful person ever (the polar opposite of Ted Kaczynski). I managed to get a job in less than five minutes and I started THE VERY NEXT DAY.

Now, almost two weeks later, I'm still thoroughly enjoying working at the SFAF. Aside from helping out with administrative tasks around the office, I've also been able to work at one of the needle exchange sites, and help with a wellness group that provides HIV and Hepatitis C tests, meals, and support for at-risk men. Most of all, I've truly come to adore the work environment at the SFAF. The people are so, so nice and so, so welcoming. Everyone talks to each other, and laughs and jokes and hugs (it's super cute). I've met some great people and must admit I'm a little sad to be leaving the city so soon. Although I don't quite see myself working at an organization like this, I must say this Winter Term has been one of the most enjoyable work experiences I've had thus far.

Aside from official Winter Term things, I'm kind of peeved with my lack of photos from this month. For some reason, my camera just hasn't made it off my night stand. Hopefully, in the next two weeks I can get some banging photos of SF, as well as Berkeley and Oakland (which I've recently begun to explore!), before I have to return to the frigid Midwest. I mean Oberlin. The best place in the world.

Postscript - The contact person from my second Winter Term possibility (Organization #2) emailed me back that Thursday evening, saying they needed MORE TIME to figure out a schedule for me. I told her that was wiggity wack:

I wanted to email you back and say thank you for the opportunity. Unfortunately I have made other arrangements for my time here in San Francisco, due to the fact that I'm under time constraints as far as completing a project before I have to return to school. Thank you for being willing to work with me after such short notice. Thanks again for the opportunity and I wish you all the best of luck in the future.

I never got an email back.

Fact: The Bay Area is the best. Not that I'm biased or anything. If you get the chance (though I'm not sure public transit heads up that way) check out Muir Woods and Muir Beach. Absolutely beautiful.

Man, that other place is just missing out. You're too cool to put on a back burner.

I am jealous of your month in the Bay. I was there for five days last spring and I was enthralled. I want more!