I was outside of the Conservatory the other day when I ran into my friend Devin, a third-year double-degree student (in computer science and composition). He asked me what piece I was learning this semester on the piano. "Chopin's Nocturne in E-Flat Major," I told him. "The second one, the famous one."

"Yeahhhhhh," I started to agree. The truth is, it used to be my all-time favorite song on the piano - gave me goosebumps when I listened to it, sometimes made me drop a tear. But now? "I don't know. I feel like because I've been learning it and practicing it all semester, it's lost a lot of its magic."

And somehow I'm okay with it. It didn't take me long to realize, after starting secondary lessons in the Con, that when you learn a piece - even if it's the most beautiful, kinetic, awe-inspiring music you've ever heard in your life - inevitably you take out its mystery. You have to: In the process of breaking it down, you're discovering the twists and turns of the music that make it so powerful.

And Chopin's Nocturne is no different, unfortunately. Now when I listen to Arthur Rubinstein's rendition of it (the best rendition, in my opinion), I don't feel the climatic build-up at 3:25, nor do I feel the familiar goosebumps when the piece drops at 3:36. I hear the precision of his trills, and wonder how can I do that?? I hear the quickness of his left hand - the subtleties of his chords - and feel agitated that my left hand sounds so clunky and distracting when I play it. 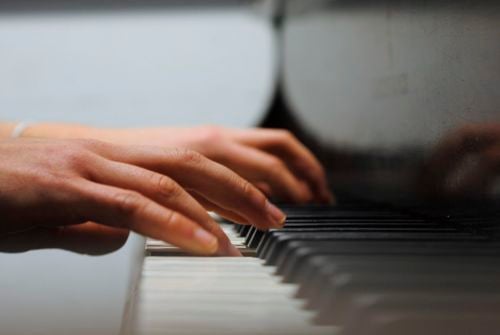 Practicing my piece on one of the Con's several hundred Steinway pianos (because those are what we have in the practice rooms. I know. I'm so spoiled). I tried to take one of those really epic photos of piano hands oh-so-wrought with artistic emotion, but soon discovered that my form is abysmal - all of my photos just came out with my wrists bent or my pinky finger sticking out awkwardly. Plus it doesn't even look like I'm playing anything in most of my photos - my hands look oddly still, and kind of old, if that's possible. Oh well! As far as you know, I sounded like Arthur Rubinstein aka sheer genius. We'll have to find Ness to record it. :)

Before I started taking piano, I had always imagined the Conservatory students to have it so good - I mean, for their homework, they get to play guitar, or jam on their saxophone, or sing songs! What fun! Compared to sitting in lab for four hours studying the optical properties of minerals, or discussing Lucretian theories of democracy and politics, I would play piano any day.

But after almost three years of piano at Oberlin, I understand just how naïve this is. Playing music for credit is not "easy" or "fun" or "magical" or "lucky." Mostly, it's really freakin' hard. It requires you to pick apart your piece, play every little segment over and over, dissect it, tinker with it, cry over it, feel completely lame about it, then get over yourself and start practicing again. You have to be precise and diligent, creative and robotic. And then - after all of this - you have to re-discover the emotional beauty in the piece, and use it in your performance.

Yeah, good luck with that. There's no way, right?

Except that so many people here can do that, and do it every semester. I swear, from just my 2-credit piano lessons, I've gained an entirely new respect for the musicians here at Oberlin. I honestly don't know how they do it - how they play their music with such bravery and intensity, don't buckle under the pressure. You have to be such a strong and confident individual to be successful in the Conservatory. Don't get me wrong, you have to be strong and confident to be successful in just about anything you do - but with music, there's a deeper emotional component to your failures and successes. If you fail a chemistry test, it's because you either didn't study enough, or just aren't that good at chemistry (the latter of which is totally understandable). But if you fail at music, it can say something about your character. It could be because you didn't practice enough - but, more terrifyingly, it could be because you aren't resilient enough. Mastering chemistry requires diligence and smarts, but mastering a piano piece requires diligence and smarts, plus creativity, plus the immense capacity to both overcome emotional hurdles, and, simultaneously, to use that emotional component to bring the music alive. 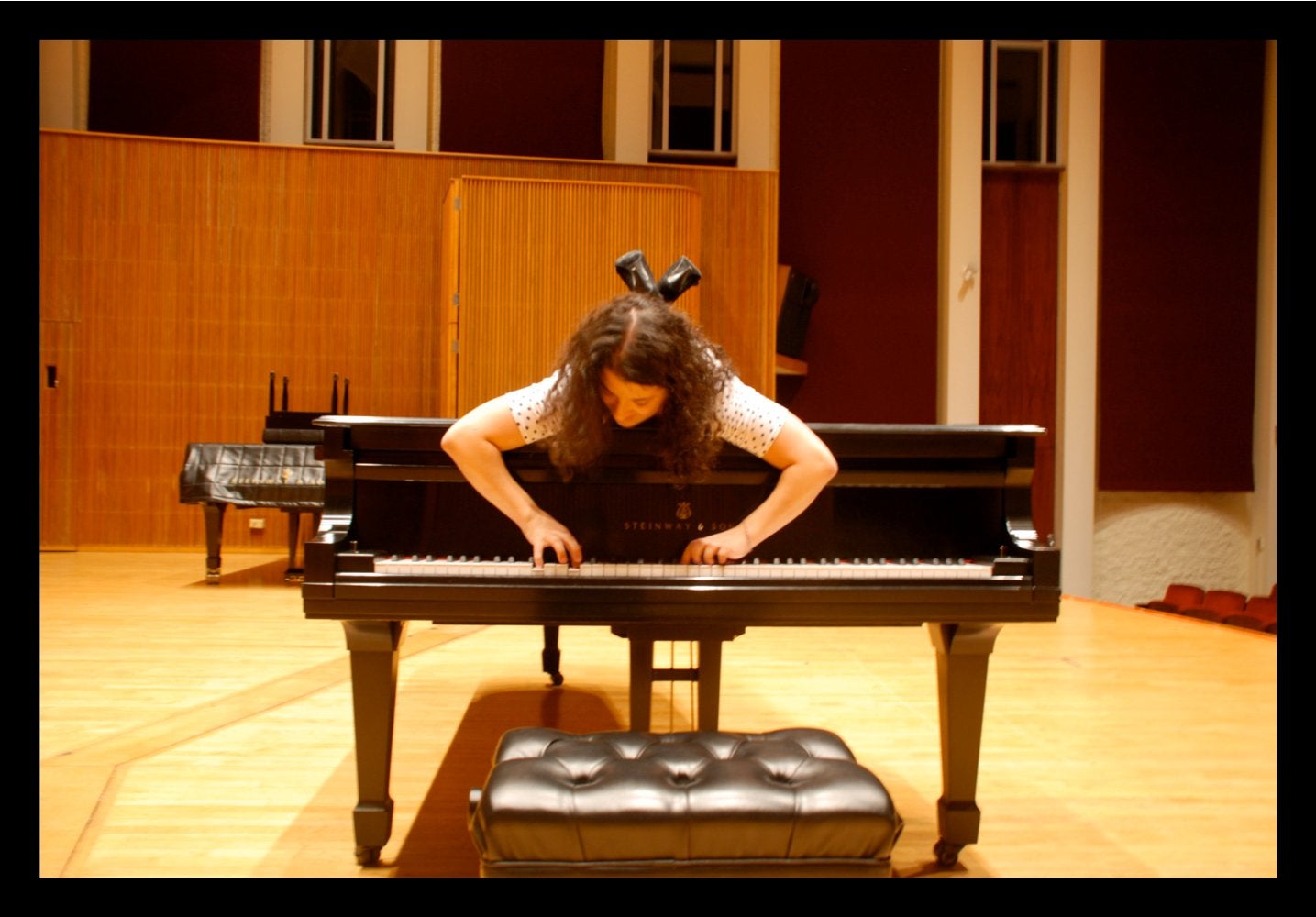 This is Margarita Rovenskaya, my student piano teacher I had for three semesters. She always managed to bring a huge smile to my lessons, and motivated me to practice, while also making sure that I had fun and was happy. I admire Rita in more ways than I can say. Photo cred to Hannah Kalson.

Earlier this semester, I told my friend Adrian Jewell (fourth-year double-degree in neuroscience and piano performance) about my fears of "ruining" Chopin's Nocturne by playing it.

"I'm afraid I won't do it justice," I told him back in September. "Or, even worse, that I won't like the piece anymore, that it will be ruined forever if I try to learn how to play it."

He nodded. "Yep, you probably will," he said matter-of-factly. "But you know, that's okay. You'll gain a new appreciation for it. You'll hear someone play it at a party, or a recital, and you'll hear the beautiful ways in which they play their trills, or how seamlessly they make the transitions, and you personally will understand how hard it is to do that. You'll hear the piece in a brand-new way."

So I have. And I think that's worth much more than just two credits.

what are Lucretian theories of democracy and politics?

I like this so much :) :) :) I'm currently working on the f# minor nocturne! they're beautiful pieces.

Don't listen to Adrian! Work at it! The beauty and mystery of music only grows the more you study!

Paris this is beautiful and much appreciated. You understand :)

I always try to play my favorite pieces of music; it doesn't ruin them for me at all. I always feel like I gain a more intimate understanding of them by studying them so closely, and I love that - and if I actually manage to play them well in the end I'm usually pleasantly surprised and mildly impressed with myself, which is also a feeling I enjoy.

A lovely piece of writing Paris. You do your father proud.

So pleased and thanked-you to see Ms. Achenbach is blogging for Oberlin this year! Diggit, dude! I do wish you'd be more mindful about using gender neutral prepositions, though.

Interesting perspective on the act of recreation; I find in poetry that imitation & memorization help me grow closer to the poem and experience it more fully [laboring over a line I might have otherwise skimmed]. It sounds like this isn't your experience with musica -- perhaps that's cuz you're really a poet at heart. Consider a verse workshop for your next hardest easiest class!

This piece was my "heart's own Love song! Er, ah, we should say piece". After getting into college due to my piano scholarship in 1979, I took for granted how I played piano; like breathing air in and out of my body, like life itself. I didnt play piano again, (study music), until I woke up from a broken neck surgery in 2016, When I came back to consciousness, my mind I was going over my Piece D'Resistance, Debussy's Pour Le Piano. However, my left arm and hand and fingers didnt work, even after intense months of physical therapy. I prayed, "Dear God? What happened to my left arm muscles?" Then it hit me!
I began piano lessons, (AGAIN!), at age 50-something with Helen Bungert @ Freehold Music Center (NJ). Since then, I have recovered 65% of my Left arm muscle memory. I will be playing the Nocturne in E Flat Major in my 1st piano recital in 40 years. (in June 2018.) I will be performing also from memory, a Piece dedicated to my childhood piano teacher IngrId Jacobson Clarefield. (Now at Princeton Choir College, NJ). I hope to send her the piece, "Ode to Ingrid", to be recorded for the first time since 1979. The Piano/forte was my voice, and my identity as a youth. As an adult, it physically, emotionally and in Soul speak, saved, all my lives, (past and present and future.) You need to sit with a piece of music like Chopin's Nocturne for at least 4 decades before you can appreciate it. What it is in reality is: your companion, your mirror, your nemesis and the empowering factor for the soul's very salvation! (Or at least that is my life's experience ). God Bless God for creating music on the 8th day. Keep it with you always young dear, you have decades ahead of you. I know this piece will sit with me someday if I am lucky enough to make it to 70 0r 80 years old. I will listen to it then, and nit will be the soundtrack for my leavingn my earthly body behind. I wii miss most myhands and fingers glidingover the keys as a breeze wafts. That's who I am. Love always, Lee S. Summers, (AKA Lisa Sonnenfeld)