There has been an usual amount of sunshine and 40-degree weather in Oberlin this past week. The snow was almost all melted from the sidewalks and streets when another 10 inches or so were dumped upon us poor Obies Thursday night. The snow has actually provided me an opportunity to work on my plans for this summer, so I'm not too put out. I've been spending the cloudy, cold afternoons filling out applications for undergraduate research programs in North Carolina, where I will most likely be living June-July. Most of these are engineering programs researching things like solar charging stations for electric cars, battery technologies, biomedical engineering problems, and robot neurons (wheee!).

In writing a number of personal essays and revising my resume I've been going back through my recent and not-so-recent experiences with engineering, and I believe I have come upon my earliest engineering-related experience, the beginning of my journey: Nostalgia, here we come--

In preschool once, I remember the principal/ sometimes teacher Mary bringing me an old cassette player that we sometimes used to play story books on tape while "reading" along and looking at the pictures. She told me that the tape player was broken, and asked if I could take it apart and see what was wrong with it. I was given a plastic tub to keep all of the little screws and gears in, Philips and flat head screwdrivers, and a small table to work on. I recall starting out rather methodically, finding all of the screws in the outer casing and unscrewing them carefully. I pried open the plastic cover to reveal the convoluted innards. They looked daunting, a mess of dusty metal, some belts and pulleys, and wires.

I turned a few of the pulleys, pressed the 'Play,' 'Pause,' and 'Stop' buttons a few times to get a sense of what each one did, and went to work. I had a rough understanding of how the pulleys turned the cassette tape, and not much more. Things got a little hairier at this point, if I remember right, and I found new uses for my simple tools. The flat head screwdriver could be easily used as a pry bar, I found, pulling up pieces of the tape player whose screws wouldn't yield to my five-year-old hands. The butt end of either screwdriver could be used as an improvised hammer, possibly removing components that were stubborn enough to resist even my flat head crowbar technique. Somewhere along the line, I found a belt that had come off of its spindle, and concluded that this error had caused the tape player to malfunction. It never crossed my mind at the time that any of the pounding, prying, and piercing that I had done with my screwdrivers could have dislodged the rubber belt from the pulleys it was meant to pull. I was proud of myself.

When Mary came back to see me later in the week, she asked me about my progress on the cassette player. I told her I had located the problem, leaving out that I had then continued to dismantle the tape player until there was little indication that a tape player had stood where a mess of metal now was. She asked me if I could fix the problem and put the tape player back together. Now, I may have some selective memory problems going on, but I don't remember any talk of putting the player back together during the talk of taking the player apart. Looking back on it, it seems a bit unfair of her to ask a five-year-old to take apart a piece of machinery, see the gleam in his eyes when you give him the tools, then take the wind out of his sails when he's all finished by asking him if he could put it back together again. I might have cried at this point. And learned a valuable lesson (~soft piano music~).

In addition to chronicling my most formative experiences this semester, I am teaching the Advanced Short Form Improv Comedy ExCo with my friend Greg. The ExCo fair was two weeks ago, and as always, the Carnegie Root Room was ridiculously busy for two hours while people scrambled to sign up for anything that looked fun. 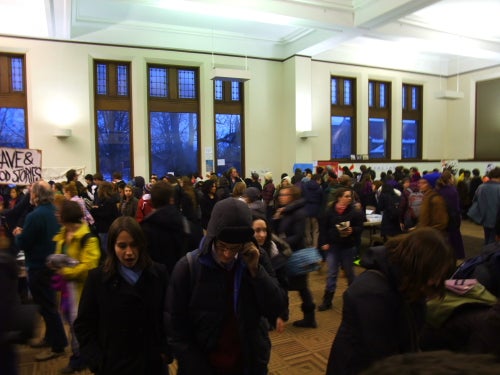 The Root Room during the ever-popular ExCo Fair. Read about it from Ma'ayan's POV here.

The upside of ExCos is that you have an organized place to do things you might not otherwise do, and you can so easily connect with people who are interested in the same things you are. The downside of having ExCos is that there are a ton of them that you know you would love. Since I am taking a relatively light course load as far as credit hours go (Physics, Calculus and Epigenetics. Extra numbers and hard science, please) I am going to be able to focus on teaching the ExCo, working with Obehave on making our shows super good, and blogging (imagine!). 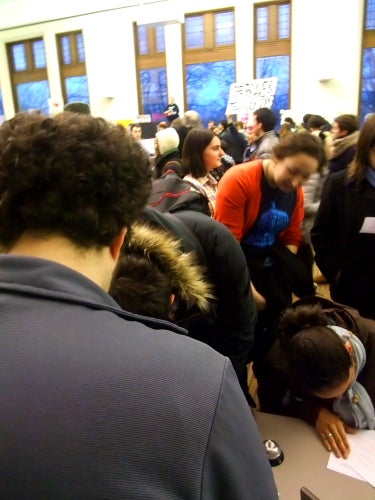 Now, after our second class meeting, we have a nicely amalgamated, fun group of 9 who meet on Thursdays to act goofy together. The idea is to have more people involved in improv on campus, and get together every once in a while for large, informal events where anyone who wants can come and play. Greg and I both believe that doing improv is not only fun, but transformative and therapeutic, so we're trying to spread that around as much as possible.

As you can imagine, the mental picture of little towheaded 5-year-old Joey taking apart a cassette player made me explode from the cuteness.

Love hearing about your ExCo! I majorly regret that I never took any of those classes at GC...

Great over-the-shoulder shot of Greg! You managed to capture so much action. Can't wait to see all the OBehave shows this year :D

Your story warmed my heart. I wonder if there was a hidden test mixed in with your inevitable destruction of the tape player... Was your principal trying to figure out if you were a mechanical genius at 4? Or doing a psychology project on defeated youngsters? Either way, I'm happy that you got to tinker with things at such a young age so that it has contributed to your educational journeys today. I do hope you're using it as a humorous anecdote in your application process.

Gen- I'm surprised you can even imagine me as a five year-old. I was seven for so long...

Ma'ayan- These were taken in the frantic first ten minutes after they opened the doors. The best time for action shots, no doubt. I think that kindergarten teacher was trying to embed a lesson into the whole thing. And I learned that day never to trust adults again.