I had a strange experience recently. The sister of a friend of mine from high school friended me on Facebook. This, in and of itself, isn't that odd. It turns out, though, that she had thought to friend me because she's thinking of transferring, and, during her college search, she had come across this Oberlin Blogs website and read some of my posts. So, there you have it, prospective students actually read this blog. And, it gets better, she's considering transferring... to Oberlin! And, yes, I'm going to take full credit for this. Unless she decides not to transfer here, in which case my blog played no role in her decision. Anyway, on with this post.

I'm a union man. Or at least I was, sort of, for a while. A few summers ago, I worked as a receptionist in the office of Mayor Rybak of Minneapolis. In Minneapolis, city workers are represented by AFSCME (American Federation of State, County, and Municipal Workers). So I was a member of AFSCME for all of three months; my sister, a public defender in Minneapolis, is a Teamster; and I'm one of those loony liberals who believes that unions are good for the economy, our communities, and our social fabric. So, yeah, I've got some union pride, and, no, I don't cross picket lines.

One year, my sister got me a Teamsters mug, which was a pretty terrific gift. It allowed me to show my union pride while drinking a refreshing beverage. And it saved my life. 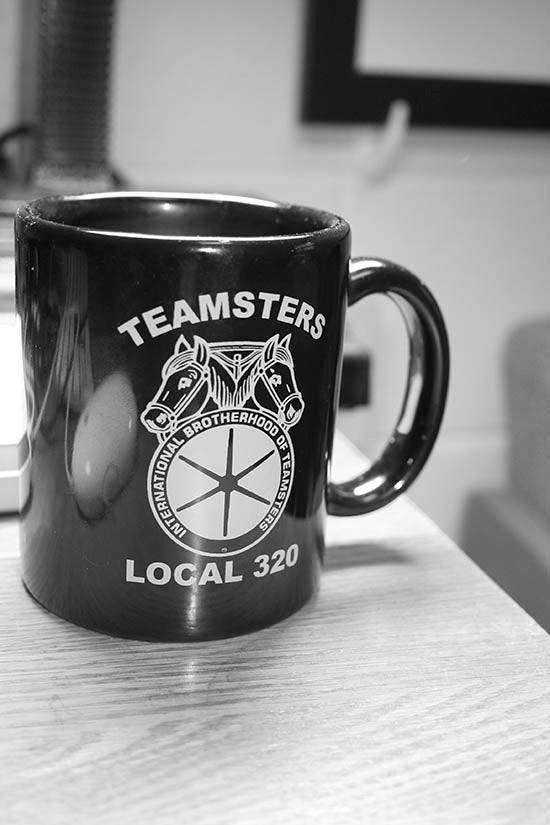 I am a big believer in the Tuesday/Thursday schedule. Let me explain; most classes at Oberlin are scheduled in two ways: (1) Monday, Wednesday, Friday for one hour or (2) Tuesday & Thursday for an hour and a half. I try to pick my classes so that I only have Tuesday/Thursday classes. The upside to this schedule is that you end up with a four-day weekend, and a three-day week. This is awesome. It allows you to do fun things like take weekend trips to New York City or stay up late playing poker on Sunday. Fun!

There is a downside, though: Tuesday and Thursday are long days. You end up with almost solid classes from morning till night, which is more taxing than you'd think. After all, college classes--at least for me--require a bit of digestion, and, after the fourth or fifth philosophy class of the day, you're bound to get a bit of a headache.

This is where coffee comes in. In addition to whatever coffee I drink when I actually get up, I end up taking a full thermos plus a mug's worth to class with me in the morning. This way, I stay nice and jittery all day.

And you can tell my mood by the coffee mug I take with me to class: "You're my most wanted" or "JBHMD" when I'm in a silly mood, "Mudd Mudd Mudd" (the mug from Mudd Library's Azariah's coffee shop) when I'm feeling scholarly, "Ich Bin Ein Oberliner" when I'm feeling full of myself, and, of course, "Teamsters Local 320" when I'm feeling political.

One fateful Tuesday morning, I was a little more harried than usual. I like to be awake for at least an hour before class, which gives me time to re-read (or skim) the readings, check my email, check Google Reader, etc. This morning, I had overslept a bit, and was in a foul mood as I topped off my Teamsters mug. There was a lot of construction on my route to class. They were pulling up the sidewalk and doing god-knows-what. And, as I speed-walked with my head down, chugging coffee, and sucking down nicotine, I wasn't really paying attention to where I was going. There was a large truck blocking the sidewalk, and, as I walked around it, I didn't see the Caterpillar bearing down on me. I heard a shout and I looked up to see this massive machine stopped a few inches in front of me.

The man driving the Cat looked, gestured at the mug in my hands, and said, "Teamsters, huh?"
"Yeah," I said. "I'm sorry. I wasn't really looking where I was going."
"It's all right," He said. "But I might not have stopped if it weren't for that mug."

A few of you know that I'm a copy editor for The Grape, which, let's just say, is an "interesting" job, involving an all-nighter every two weeks and coming up with standardized spelling for words too foul to put on this website. In is in tribute to that job that I have this new mug: 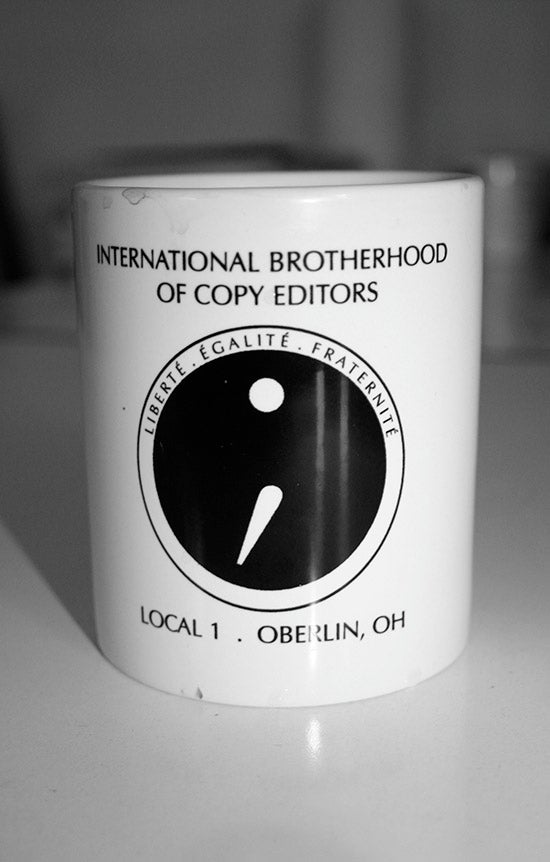 John, that mug rocks. I look forward to seeing it this year as we stay up late wrestling over the correct spelling and punctuation of some choice innuendos.

Also, I am incredibly relieved to hear that someone else has an arsenal of mugs and picks based on their mood. For me, I have my "Community Housing of Maine" mug for my political days (a parting gift from my high school job), my "Maine Public Broadcasting Network" mug for music-y things, and a pink-and-green flowery mug my sister made when she was little, for those dark February days when a little bit of sunshine (and irony) are needful things.

I want one of those for my copyeditor son. Used to be I woulda wanted one for myself. And yes, I was a member of the union!

I was really excited when I learned how to bike to class with a full mug of coffee balanced on one handlebar, only sometimes sloshing. Next step: cup and saucer with no hands.

Alice, I'm jealous - I spill hot tea all over my hands just walking across Tappan Square... It does warm them up in winter, but still not a good idea.

That copy editing mug is amazing. Do unionized copy editors have more say in what all is in their style guide? That is, could they go on strike demanding we bring back the serial comma?

No, Will, you aren't alone, and I, too, find that sunshine and irony can fix just about anything.

And, Alice, I must say I'm impressed and jealous; when I try to bike and drink coffee I normally end up shouting some choice epithets that I dare not repeat here.

Chris, you're damn right we do. And if you're not careful, we'll try to unionize The Review's copy editors. After all, who wouldn't want to see the serial comma over there? And, let's not forget, correct use of the em-dash. Seriously, putting a hard space on either side?

Also, I love your mugs. A-MAZING.

I did not get paid to read this post.

Keep up the good work.

Lillie--
It'd be a good deal if you DID get paid to read this post, though, right?

I'm originally from the Cleveland area and now live in Houston... Just authored a book and think that Oberlin would be a great place to have a book signing and to chat with potential readers. (I'll be in the area Jan 14-19)

Going to contact Java Zone about that...wondering if in the meantime I can send you a copy?

Susan Parker
Author of Walking in the Deep End
www.walkinginthedeepend.com

Okay, how can I find/buy one of these mugs?