Back home in Cambridge! It's like living in a doll's house, after being in the US and Canada for a year. The houses are tiny and creaky, the streets are a side-mirror width less than two cars wide, the shops would fit in one aisle of Wal-Mart, everything's very green and I don't have an accent anymore! My friends seem relieved and a bit surprised that it hasn't changed. I think they were slightly dreading a Texas version of Ruby... I've spent loads of time reading, sleeeeeping (so much to catch up on), eating (no slight dining-hall-y aftertaste!), seeing friends, doing some more door-to-door fundraising for students I'm sponsoring to go to school in Ghana - a whole other story: I taught at a small village school in 2011 (although I learnt far more from them) and am funding scholarships for two of the children I met, with a brilliant charity called the SmartKids Foundation. It's fun knocking on random houses and seeing who answers. There's the lovely old lady who takes you inside for a cup of tea and then you notice the stuffed animals and think of Roald Dahl, there's the guy with the cool shades who says 'well done, it takes balls to do this,' but he already supports enough charity, because he owns a bank in Kenya, and then there's the person who takes one look at you and slams the door in your face. Great fun! Maybe I should test this out in Oberlin and compare results. 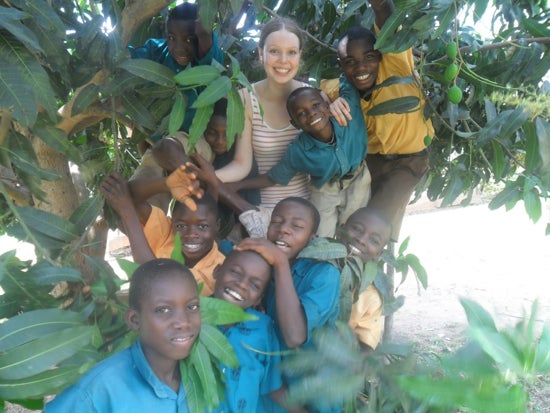 Can you spot the mangoes?

I went back to visit my old secondary school with a friend a while ago. The school logo has been modernised to look less like a tree and more like a streamlined piece of broccoli. 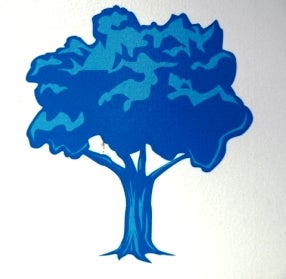 Some of the best old teacher comments we got: 'Were you always that tall?' 'Yes, we are still teaching Lord of the Flies,' and, from someone for whom I wasn't exactly the favourite pupil, 'what are you doing here?? What do you want??'

Not much has changed, but things look different. It's harder being so far away from home for most of the year than I thought it would be, but I like coming back and seeing everything with fresh eyes. It's great to see old friends growing up, doing their own things and really enjoying their freedom. I've almost started to enjoy the constant drizzle, as I never managed to before. The old 'town vs. gown' division between the university, where 70% of students come from private schools and tuition fees have skyrocketed, and the general public living around its walls, has seemed a lot more dramatic. There's a big feeling of privilege at Cambridge and it's not my cup of tea - that's a big reason why I came to Oberlin instead, where that kind of judgmental attitude just doesn't seem to exist at all. And now, if I see one more young guy strutting around in loafers, a blazer and a straw hat, having had one too many glasses of Pimms, I might do something I regret.

One thing I don't miss about the US: hyper-capitalism. One thing I miss: hyper-optimism. In the US, if you ask someone how they are, they'll probably say, 'Yeah, things are hard...but it's worth it, I'm fine, everything's great, what a lovely day it is!' And you think...really? In the UK, you'll get, 'God, things are so tough, why do we bother? What a horrible day. Just look at the rain.' Or, a more refined version: *sigh* 'Can't complain.' Americans are naturally hopeful, and we are naturally miserable. As Compte-Sponville put it, 'To hope is to desire without consummation, without knowledge, without power.' But is depression better? Hard to say. I think I'll go for a healthy mixture of illusion and disillusion.

My last semester at Oberlin was a total burnout. I was unable to find the edge of the cloud, let alone the lining. Work was coming out of my elbows. It felt like this:

I can safely say that trying to write music whilst cramming maths and physics is not good for the heart. They don't tell you in the brochure that the double degree is basically impossible, but once you get here you realise that it is. Something has to change: self-enforced curfews, perhaps? A watch that injects sleeping potion at midnight? Plans will be put into action. A blanket that suddenly becomes spiky at 9am? God, no. How about: no more 9am classes! Yes, that sounds better. I hereby vow never to be upright at 9am (and in a classroom). I will discard possible majors in the face of 9am classes. I will forget lifelong dreams in the face of 9am classes.

Before I came to Oberlin, I knew nothing about what I wanted to major in. At this point, I know even less. I've tried philosophy (too technical and 'academic'/specialized - Nietzsche's joke about 'brains of leeches' springs to mind), classics (it's great, but something puts me off...not enough space for creativity, maybe?), physics (sometimes a bit dry [although I loved the in-class experiments] and sadly often technical too), maths (they say we all reach our peak in maths)... I almost took a class on Egypt after the Pharaohs. I mean, not even during the Pharaohs. Can you get more confused than that? You don't even want to know how jumbled my class line-up is for the fall. I think I might be subconsciously avoiding 'fall'ing into this (sorry): 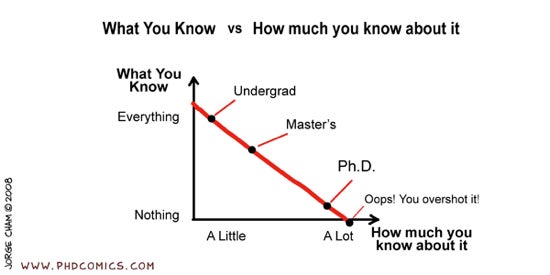 It's an ongoing massacre of the majors. Major god, how long will you forget me? I'm getting pretty curious about how this will turn out. Can you bet on your own future major? What would Miss Marple say, I wonder? Probably that the solution is always right under your nose. I haven't seen it yet. Time for a class in African drumming.

So you know on those meditation tapes, where they ask you to 'imagine you're walking down a path, and there's a secret garden at the bottom'? I needed somewhere like that this summer. This was it: 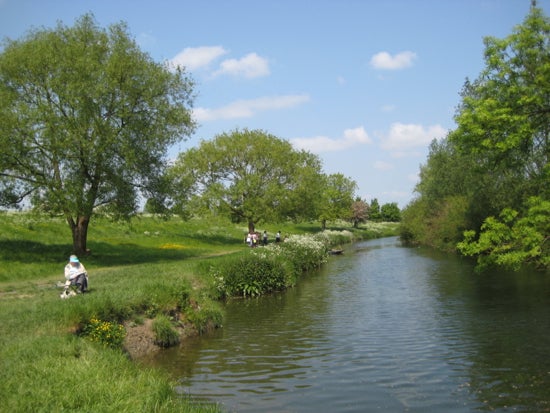 Grantchester Meadows! The nearby café serves massive scones and baked potatoes - except they've stopped doing baked beans for the potatoes, so when I'm eating it just with cheese on I always get this little voice in the back of my head going 'beans please.' Also good is 'Byron's Pool', where the old Lord used to swim. It's now a particularly brown part of the river with a stunning nature reserve all around it. There's a resident bee colony too. I'm really not doing it justice. But take my word for it, it's a great place to hang out, read poetry and forget everything else. 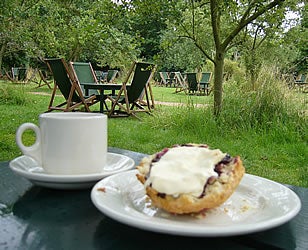 Let's round up the summer poetry reading with good old Rupert Brooke:

And of that district I prefer
The lovely hamlet Grantchester.
For Cambridge people rarely smile,
Being urban, squat, and packed with guile;
And Royston men in the far South
Are black and fierce and strange of mouth;
At Over they fling oaths at one,
And worse than oaths at Trumpington,
And Ditton girls are mean and dirty,
And there's none in Harston under thirty,
And folks in Shelford and those parts
Have twisted lips and twisted hearts,
And Barton men make Cockney rhymes,
And Coton's full of nameless crimes,
And things are done you'd not believe
At Madingley on Christmas Eve.
Strong men have run for miles and miles,
When one from Cherry Hinton smiles;
Strong men have blanched, and shot their wives,
Rather than send them to St. Ives;
Strong men have cried like babes, bydam,
To hear what happened at Babraham.
But Grantchester! ah, Grantchester!
There's peace and holy quiet there,
Great clouds along pacific skies,
And men and women with straight eyes,
Lithe children lovelier than a dream,
A bosky wood, a slumbrous stream,
And little kindly winds that creep
Round twilight corners, half asleep.
In Grantchester their skins are white;
They bathe by day, they bathe by night;
The women there do all they ought;
The men observe the Rules of Thought.
They love the Good; they worship Truth;
They laugh uproariously in youth;
(And when they get to feeling old,
They up and shoot themselves, I'm told)

Here's the whole epic thing. I guess I'll take my urban guile-y squatness. I for one have had lovely times in Coton and Madingley, but I must admit, not on Christmas Eve. I have also met various friendly, even timid, Royston men with quite normal mouths. I'm yet to see these 24-hour bathers, but there is indeed a popular naturist club down by the river. Anyway, Grantchester has been a great place to recuperate. We were saying the other day, that there really is something special about the English countryside air. My dad thinks it must be the mould in the soil.

On that note, I'm all spa-d out, the bags are being packed (who am I kidding - they will be stuffed and sat on the night before the plane ride) and I'm heading off to Canardia (home to many ducks), and then: Oberlin round two. Bring on the chaos. Summer has gone so fast! It's going to feel weird being back. No more baths! But I can't WAIT to see everyone again and fingers crossed we'll all have loads of fun and eat Lots. More. Fruit.

I had similar issues with 9am classes. I figured it was a waste of a good spot in class that someone else could take instead of me. Anything after 9:30am, I was good. Anything before that, zzzzzzzzzz.

And this is now coming from the girl who is awake consistently at 7:45am for a 9am job now. I guess we all grow up.

Why don't you major in English? You seem to enjoy the literature part, and you're creative! Best of luck with that. And thanks for the blogs; this is a) entertaining, and b) nice research for college apps!
Q: Would you advice against taking a double degree (voice performance and international politics or some Arabic fancy stuff)?