I just got back from Montreal. I was playing in the Montreal International Recorder Competition, because, yes, I play the recorder, and, if I do say so myself, I don't suck at it.

If you were wondering, it went well. I played the semi-finals, and moved up to the finals, where I came in fourth out of four. Here's me with the other finalists and winners: 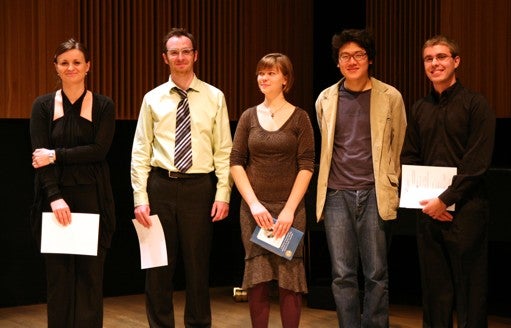 I also won the prize for "Originality in the Semi-final Programme," which was pretty sweet. The prize for the Originality prize was a modern bass recorder. 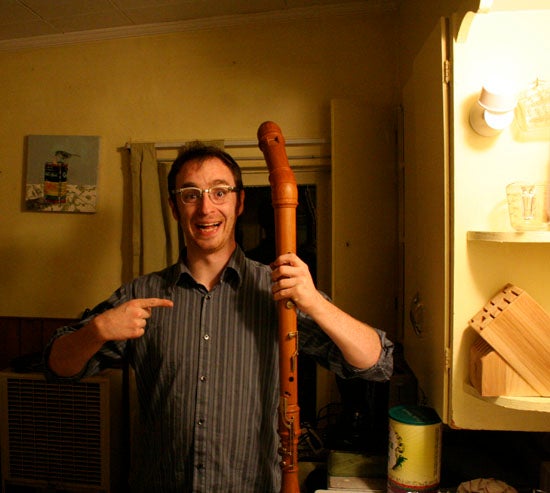 The competition was sponsored--at least in part--by McGill University (the main Anglophone university in Montreal). As I spent the majority of the time in a practice room, I didn't get to do a lot of sightseeing. But I think I learned a few things.

I learned, for example, that the neighborhood around the campus is called the McGill Ghetto, because it's a little pocket of Anglophone college students who, according to my sources, don't often get out to broader Montreal. I also learned that if you travel anywhere West of "the Ghetto," you had better speak French, because shopkeepers and taxi drivers will roll their eyes at you if you don't.

I learned that those same taxi drivers, upon discovering that you're an American, have a tendency to shout "OBAMA!" I learned that, as one Montrealer told me--in French, of course--it's cool to be an American again.

I learned that punk didn't die; it just moved to Montreal and got really, really French. Seriously, I have never seen so many people my age skateboarding non-ironically.

But, most of all, I learned that I am really glad to have gone to Oberlin.

I almost went to McGill. Oberlin and McGill were neck-and-neck until the end. Here's the (probably apocryphal) story I like to tell: the day I had to send the letter saying which college I'd like to attend, I still hadn't made my decision, so I walked down to the mailbox with two sealed letters--one to Oberlin and one to McGill. I made the decision on the corner, right before I stuck the Oberlin letter in the box.

I doubt that this story is actually true. But it captures the way I ended up at Oberlin: almost by accident or chance.

The strange thing about this is that Oberlin and McGill have very little in common. McGill is huge (app. 40,000), public, in a big city, and in Canada. Oberlin is small (or by comparison), private, in a cornfield, and in the U.S. Really, the only thing they have in common is that they both have killer Historical Performance Departments.

But, after being at Oberlin for the last 800 4 years, I can say, both with gratitude and a sigh of relief, I made the right choice. Not that there's anything wrong with McGill! It's a great school, and Montreal is an amazing city. But their practice rooms are only open until 10:30! And each harpsichord room requires a different key! Crazy!

In all seriousness, though, it's more a matter of the way Oberlin's size and, err, let's say unique student body creates a community--one far different than I found in McGill. Indeed the great "disadvantage" of Oberlin--that it's in Oberlin--ends up being its great strength. In Montreal you already have vibrant communities; in Oberlin, you're forced to create, and creating community has been one of the most rewarding things I've done in my time here.

"I learned that punk didn't die; it just moved to Montreal and got really, really French. Seriously, I have never seen so many people my age skateboarding non-ironically."

Oh, man. I don't think the campus skateboarders are being ironic. I think they're being on time.

@ Aries, re: Obie skateboarders wanting to be on time: http://www.youtube.com/watch?v=2CTPLUcQAjk

Ever since getting lost at IU's school of music and finding myself in a hall full of harpsichords and recorders, I've been curious about these things. How many different recorders do you/are you expected to play? How many recorders do you, personally, own? I have other questions, but they're not coming to me. In fact, can you do a post just about recorders and what you do? I have no idea. But it's really cool. I would love to take harpsichord and/or fortepiano lessons while I'm at Oberlin. Especially after all the Malcolm Bilson classes that just went on, I have this gnawing urge to play the fortepiano. Someday...

Oh, and the same thing happened to me decision-wise. I had to choose between Oberlin and the University of Michigan (also two very different places). I was in my orchestra teacher's office, had the two different letters ready to go, and told him to choose one PLEASE NOW. And that was that...

Debra Chermonte would just die re: the 'middle of a cornfield' reference. when someone first told me about Oberlin, they said it was a bunch of modern architecture in the middle of a cornfield. I pictured a house a cubist would draw dropped literally onto a cornfield, like no road or sidewalks or grass, just buildings and corn.

And then I went to Oberlin and realized that I couldn't see any actual corn from anywhere on campus. That I had to travel just a little bit to find barns 'n shit.

That isn't to say Oberlin's not isolated compared to a school in a big city. It's just that it's not a farm school (my dad with to Kansas State University, where he majored in Agricultural Economics. now that's a farm school), and I feel like repping the "middle of a corn field" phrase perpetuates that idea.

But maybe since I come from the suburbs of Kansas City, I'm more used to open space, and the New Yorkers and Bostonians and Los Angelinos really do feel like they are in a field, even thought they are in a (albeit small) town.

PS: congrats on the new recorder! You look happy!

(John: I'm mainly addressing Lillie's comment here. Yes, I do acknowledge there's a difference between Oberlin and Montreal. It's just that "cornfield" has always seemed to me the wrong way to draw the distinction.)

@Aries: I don't think most skateboarders on campus are just being ironic either, but I'm pretty sure some are. But, I'm certain that the you'd find a higher density of skateboarders in Montreal than in Oberlin. Anthro majors: I see a great paper in your future...

@Megan: I was trying to answer your question in a comment, but I think I'm going to just write a post, so, I'll just do that. But thanks for asking! Seriously, most people either think I play a novelty instrument (after I told someone I play the recorder, she asked me if I could teach her how to play the musical saw), think I mean I record things a la TIMARA, or, after an initial bout of incredulity, their eyes glaze over. Though I should say, Obies, more than most, are quite chill with the idea that one plays the recorder. So, thanks. Also, I'm always having trouble coming up with ideas for new posts...

Okay, I'm off to the Writing Center, but David and Lillie, you're next.

By the way, the "Anonymous" post above was by me, the author of this post, John. Moving on.

@Lille & David: Here's the thing about cornfields. They really are quite close. And, if I'm not much mistaken, they really are visible from campus--if you're willing to stand on the northernmost point of the athletic fields.

But, in all honesty, while I understand the administration's discomfort with the Oberlin is in a cornfield meme, I don't think they're going to get rid of it anytime soon. Here's why: putting aside the fact that if you walk in pretty much any direction for 10 to 15 minutes, you'll find corn, most Obies are either from urban areas or idealize urban areas, and Oberlin is very much not an urban area. And, what's opposite of an urban area? A cornfield. Hence all the cornfield jokes.

That said, Oberlin exists somewhere in the borderlands between things, both literally and figuratively. Literally, because it sits somewhere the exurbs of Cleveland and honest-to-god cornfields, between an independent town in its own right and a part of the Greater Lorain/Cleveland area. Figuratively, because Oberlin neither feels like a small town/rural area (the stereotype of which is a culture-less, sad collection of buildings) or a buzzing cultural hub. The feel of Oberlin is quite--at least to me--unique in that it somehow, and paradoxically, is both a quiet small town and a buzzing cultural hub.

I don't know if that made sense... but, whatever.

Back to corn, though. I recognize that "cornfield" probably isn't the image that admissions wants people to conjure up, but it's a part of Oberlin's topography, both literally--in that you don't have to walk far to see them--and figuratively--in that Obies love to imagine that they are in a cornfield.