Alphabet soup is delicious. There are so many acronyms in Oberlin: CDS, OSCA, IGA, CIT, EAS, TIMARA... there are too many, actually.* There are also those names that are just a series of letters, like R2D2, M.I.A. and Will.i.am, and my personal favorite, RJD2. To be noted, RJD2 =/= R2D2. But they're both adorable and electronic.

Sometimes I listen to music on repeat. A bunch. Junior year I listened to A Perfect Circle for three weeks straight. As soon as the album ended, I started it again. And I do this with a lot of music. Though it is not rare that an album or an artist holds my attention for a long time, it's very rare that I would get to see said artist live and photograph them.

Oberlin is a mecca for all things music, and not just because of the Conservatory. People here love music. One of the main reasons I came to Oberlin is that I wanted to be around people who love music, and I know I'm not the only one. Cool awesome bands and musicians are here all the time, at a fraction of the cost of most performances in the real world.

Last year, Of Montreal played a show in Hales Gymnasium, and were opened by Grand Buffet and MGMT. Before they were big. Now every time I hear MGMT on the radio, I can tell people I heard them live (they were also the best performance of that night, hands down). Animal Collective played at the 'Sco last year, as well as Lez Zeppelin (no, you're not reading that wrong; it's an all-women Led Zeppelin cover band and their signed photo is sitting above my laptop as I type this). Electronic group Ratatat played to a sold-out 'Sco back in September, and last night, RJD2, one of my favorite cut-and-paste DJs, rocked another totally sold out house.

Last spring during finals, I worked all day, and then spent from 4pm to 4am in the library writing a variety of final papers and projects. The music that I had on repeat for the whole week switched between Daft Punk's Discovery and RJD2's Deadringer. Let's just say I have a severe attachment to the latter album. Sigh. Wonderful stuff.

I got to the 'Sco early to stake out my corner of the stage. It's been a while since I've photographed there, but I was scared of the prospect of shooting in a full house. That's why I got a pretty press pass (it's new! I love it! I felt so official!) and got there about an hour before the show started. I parked my little self in the front left corner of the stage, where I had a great view of the turntables and audience on two sides of the platform.

RJ is a great sampler with incredible short term memory--to go between four turntables takes true skill. He had what seemed like a choreographed dance between the box of records on the back table and the mixing happening on the front table. Every so often when he hit a good combination, his serious concentration was broken by one of those truly brilliant grins that appears subconsciously during purely creative activities, but that sadly disappeared a few seconds later as the crowds cheered and he self-consciously turned back to his record collection to keep the beats coming.

Once Ghostwriter began, students hopped on the stage to dance, though they were quickly shooed off by 'Sco staff... but no matter, they kept on dancing in the masses below the stage. I stayed in my corner, mainly because it was a great location, I had befriended the girls next to me, and I don't like the thought of being crushed to death, albeit with my beloved camera equipment. It would be a fitting way to go, yet taking my final breath to Take the Picture Off would just be too, I don't know, ironic.

My photographic cohort Sam Lawrence was more ambitious than I was and wandered around the stage shooting from all angles. I have a great deal of respect for Sam; he ended up in the rafters of the bandstand during the election day with his camera and got some absolutely priceless shots. When he made it to my side of the stage, we high-fived each other. It takes a lot of composure to photograph artists at the 'Sco, especially sold-out shows, and I trust him to no end to do it well. I'm glad he was up there with me.

It wasn't the best show I've ever seen, but I like hearing music I listen to often being created less than five feet away. It's like a birth of sorts. I'm glad I was the obnoxious dad hanging around with the camera. 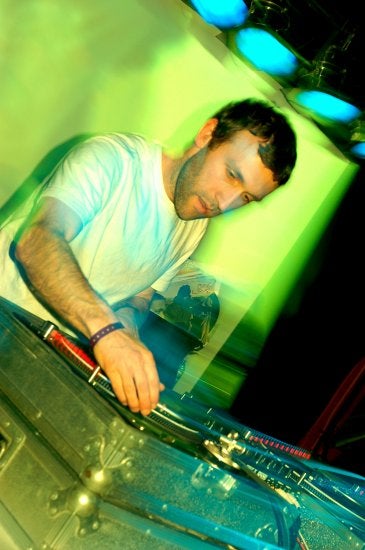 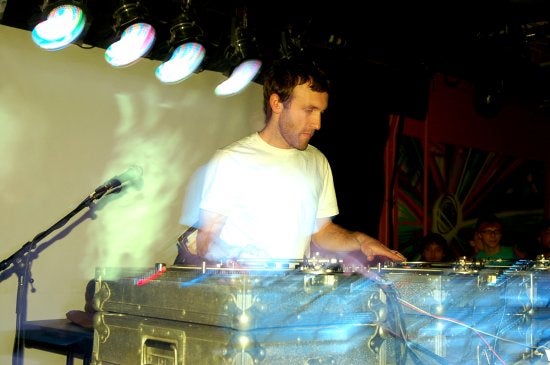 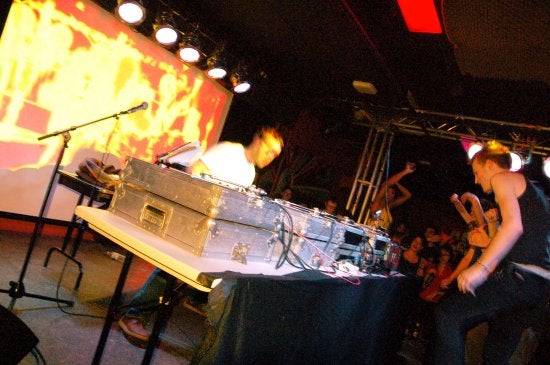 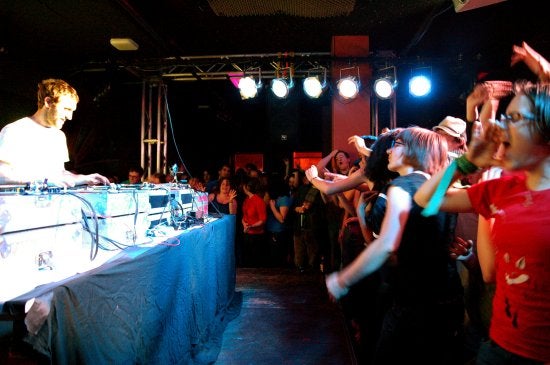 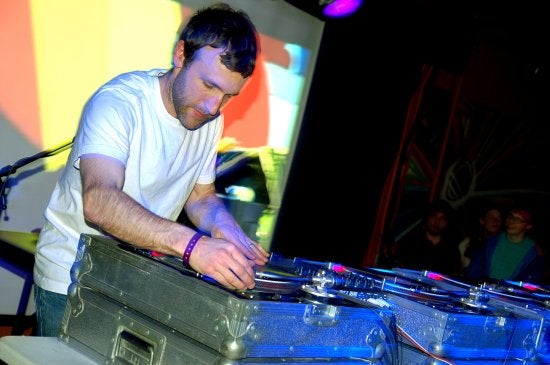 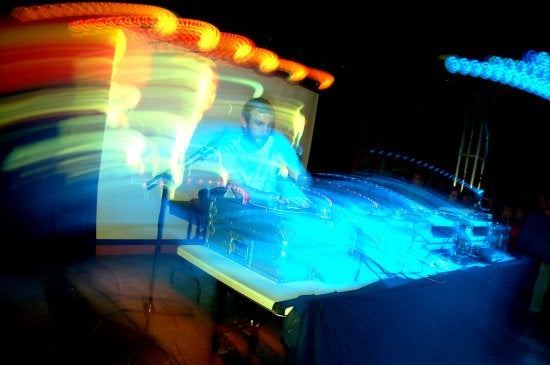 * For those of you wondering about all those acronyms: Campus Dining Services, Oberlin Student Cooperative Association, Independent Growers Alliance, Center for Information Technology, East Asian Studies, Technology In Music And Related Arts.

It's good to hear how close Oberlin and music is. I never knew there was like a little DJ scene because whenever I thought of Oberlin and music I'd think of epic masters of string instruments who didn't produce sound but dreams. Or something like that.

Anyway, I've been wondering this for a while (and I hope it doesn't sound really stupid) but can you take regular, super basic, "Pluck this string and you make sound!" lessons at Oberlin? Maybe at the Conservatory? I ask because like you I love music! I want to play an instrument sometime in my life and maybe I could learn to play from scratch at Oberlin...

Sorry this comment is so long! Oh! I thought your first picture looked like a painting. That's amazing! And really really cool.

We have some great on-campus DJs (and you can apply to be one at the 'Sco if you want to test your skills!) as well as many who visit us to show their stuff.

Students in the Con frequently teach (they're encouraged to, which is awesome for us less-musically prepared). They can either be applied as paid private lessons or as college credit, and they will start you from string one.

Glad you liked the photos!