Having graduated last December but having been too busy then to look or apply for jobs, I was faced last semester with the decision of where to live this spring. I vacillated between going home (Kansas) to chill for awhile and focus on both my writing and the job application process, going to Seattle (where I eventually hope to wind up!) to do the same while living with my best friend Seyeon, or sticking around Oberlin for several more months to keep working my part-time jobs here. As I tossed around my options, things kept cropping up to steer me toward staying in Ohio - not feeling quite ready to leave the friends I've made here, the chance to see Toni Morrison speak at Oberlin in April, wanting to walk with my class at Commencement in May, and the opportunity to attend AWP - an annual, national writers' conference, held in Chicago this year - as part of working for Oberlin College Press and FIELD magazine.

AWP itself is a three-day extravaganza of panel discussions on creative writing, journalism, teaching, editing, and publishing, literary workshops, lectures, readings, poetry slams, and an ongoing book fair with hundreds of tables representing small presses, lit-magazines, and MFA programs across the country. I worked FIELD's table upon occasion throughout the weekend...

...but mostly, I was able to wander the conference's offerings. I got to:

- see a talk by Art Spiegelman, graphic novelist, author of the critically-acclaimed Maus and designer of many New Yorker covers
- sit in on a half-dozen panel discussions, some more useful than others...including ones on teaching novel-writing, performing nonfiction on the radio, soldiers writing about their military experiences, and writing about forbidden topics
- meet Dennis Hinrichsen, whose poetry collection Kurosawa's Dog Oberlin College Press just published, and who will be reading in Oberlin on Sunday, March 15!
- meet a lot of Oberlin creative writing alums and hear what they've been up to since graduating
- go out for overly mediocre Thai food with Chelsey Johnson and Bernard Matambo, two creative writing alums who've been invited back into teaching positions at Oberlin
- (you knew it was coming) go for a run along the lake one morning as the sun was coming up 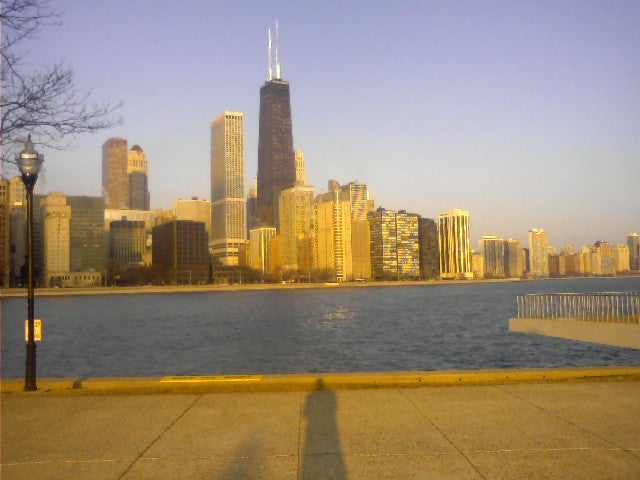 Linda Slocum, the managing editor at Oberlin College Press, and I shared a room at the Chicago Hilton - a fancier hotel than I've ever stayed at in my life, being from a campground-and/or-Motel 6 sort of family. This certainly counted as the first business trip of my young working life. Forget that there was no hot water in my bathroom and that the hotel gym cost an extra $18 a day to work out at; I was delighted with our 13th floor window overlooking Lake Michigan, and the opportunity to spend some time with Linda, whom I adore. We went to see Blue Man Group on Friday night which was, hands down, one of the best shows I've ever seen in my life. Upon returning to the hotel, I met up with several other Oberlin-affiliated people for drinks and a solid 45 minutes of social observation at AWP's nightly "dance party" at the hotel. Here's me with Adam Giannelli, who graduated in '01, edited and published this book on Charles Wright, published by Oberlin College Press, and taught a couple sections of poetry at Oberlin last semester. 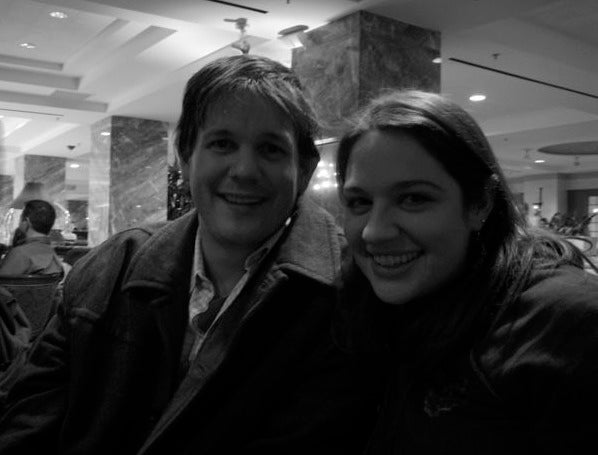 I'm still planning to put in an entry someday soon about the press and my work there, but until then, suffice to say that this year, FIELD is celebrating its 40th year of existence. On Saturday, the press hosted a 40th Anniversary Reading as a part of AWP. David Young, one of the founding editors, introduced a handful of wildly diverse poets who've been published in FIELD over the years - Bob Hicok, Marianne Boruch, Dennis Schmitz, Lee Upton, Carl Phillips, and translator and other founding editor of FIELD, Stuart Friebert.

They were a dynamite bunch of writers, each with his or her own tone and style - though universally, there was a great deal of humor in the reading. The room was packed to the brim with people, with some having to be turned down at the door. At the end, many of the attendees said it was the best panel they'd seen all weekend at the conference. Although I've only been working with the press since last May, it was neat to feel a part of all that history.

So, I'll end with a word of advice to any current or incoming prospective creative writing majors - get familiar with AWP! It's pricey registration without an affiliation of some sort to help you out, BUT...it's something to look forward to - a chance to explore a new city, meet a bunch of other writers, and (hopefully!) be inspired to write.

Lady, can you send me something written for the senior anthology? Please? You're all offical now.

Nice writeup, Yitka! The Field reading did have such a warm and special kind of atmosphere. Very cool to have Stuart Friebert and Diane Vreuls there along with the current editors. It had the feeling of a legacy.

I am still kicking myself for missing Spiegelman but I am so glad you got to see him.