I am spending this month in Chapel Hill. The idea is to work on grad school applications, hang out with my girlfriend Liz, and work on the cooler project I started working on this summer. Oh yeah, I've decided to go to grad school. 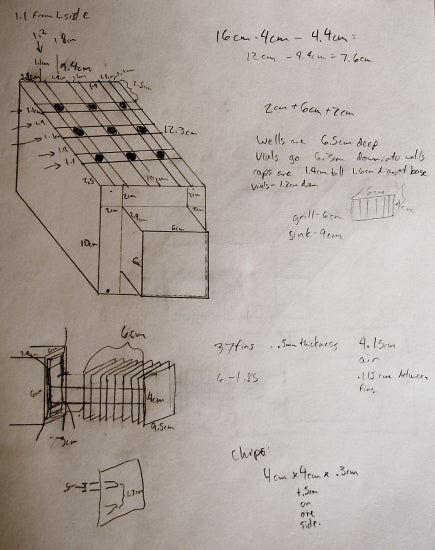 Above are some of my notes for the cooler project. This is only noteworthy because this is the
thing that will undoubtedly distract me terribly from grad school applications.


The main difference between my new and my former plan is that I will fully graduate from Oberlin in May with a degree in Biology and go on to a Master's program in engineering next fall, instead of going to get another undergrad degree in Engineering after I leave Oberlin. Game plan: I have to 1) apply to grad school, and 2) take the GRE test. The GRE has been ticked off the list as of Tuesday, so now it's just the rest of my future. It's been a little crazy getting my stuff together, but I don't have to do a Winter Term project this year so I have all of January to do applications and still have time to win at trivia night, like we did on Wednesday (I have a history of this kind of thing, I'll remind you).

The decision to go to grad school came so quickly, I had to scramble a bit to be able to get everything in on time. I spent a frantic five hours the Friday before finals getting three recommendation letters from Oberlin faculty. I spent a half hour two weeks ago freaking out because I hadn't registered to take the GRE. At the same time, I've been asking any engineers I run into whether what I'm doing is reasonable, if students go to grad school without having studied engineering in undergrad, whether I should try to get an engineering job before going to school for engineering, whether it would be possible to inhibit multiple paths in space-time and choose the one that involved less physical pain and rice/bean dishes.

I'm excited about grad school, going into a much more specific field and digging really deeply into something I'm interested in, but I'm also worried because I haven't taken Engineering classes per se, and I wonder if I'll be in over my head. I think I am worrying so much about grad school also because it feels like when I make this decision I'll be cutting off other options a little bit more than other decisions I've made (choosing a major, even choosing an undergrad college).

For a while, I was running from advisor to advisor, getting different stories on what is 'normal' for engineering grad students. First I was told that representatives from Columbia and WashU Engineering tell Oberlin students to go ahead and get their Oberlin undergrad degrees and move on to Master's degree programs. Another helpful asshole told me that most working engineers don't have Master's degrees and that most of those degrees are very specialized and go to people who want to head firms of their own. I wondered what literally burying my head in the sand would get me. A case of Sandcastler's Ear, no doubt.

Now that I've gotten input from as many people as I can, I have a little clarity in the decisions I'm making. What I'm planning on doing isn't crazy, and I'm going to be looking for jobs next year as a Plan B. I was taking everything 'adults' told me as gospel, and it was making my head spin. Letting people tell me what I should do next was the problem. Now that it's clear that there is no one right answer, I think (hope) it's more important that I make the decision, that it's my own, well informed decision. I can own it and go into the next thing with a full head of steam (or sand, if things don't work out so well).

It's a strange kind of limbo to be in, still not knowing if what I'm doing is the best avenue for myself, but a conversation I had with Liz on a run the other day offered me another piece of enlightenment. Even if studying something specific (biomedical engineering in my case) doesn't prepare me for doing something really cool that I want to do as a career (Chairman of the Make A Witch Foundation, where barely sick children can make construction paper witches until their sniffles go away), I can learn things quickly, and if I hook up with people who I jive with and can pick up on what they're doing pretty well, I still have a pretty broad range of things available to me.