So visualize this: I'm in my basement this morning, working on my bamboo bicycle, joining the steel remnants of a child-sized bike frame to my bamboo tubes. The steel pieces act as 'male' pieces, the bamboo act as 'female' pieces in my design (think plumbing, not biology). The inside of the bamboo is slightly wider than the outside of the steel tubes. At least it should be. After a half hour of sanding the crap out of the inside of a bamboo piece and filing the outside of a steel tube, the two just would not mate (not unlike the pandas that eat the very bamboo I was struggling with! More on pandas later. Also, my apologies for the mating reference, I have a bad Animal Planet and Discovery Channel addiction that I indulge in my free time here). I then had an epiphany: on my Swiss Army knife, I had a tool among the many tools that was a reamer, something I never ever thought I would need but was now the only thing I could think of that would be any help. I raced up to my room and scrambled for the little red savior, throwing books I had gotten for Christmas and tubes of deodorant everywhere. As I scrambled, I realized I knew exactly where the knife was. Sitting in my dorm room in Oberlin. In the box of tools I keep under my bed in case I have to make any bike repairs or hang a mirror on my ceiling. I remember packing for the trip home during finals week and considering the little knife. I had been smoking a lot of crack, so of course I figured I would have no use for the world's most useful pocketknife, prized above all else by the chocolate-loving, private-bank-account-saving, accurate-watchmaking, neutrality-loving army of Swissmissland.

Back to pandas. I have a bad feeling about these guys. I've watched about 16 hours of various episodes of Planet Earth lately (it happens when you've got the Discovery Channel donkey on your back) and seen the same footage of a crazy black and blue bird turning itself inside out to do a tap dance on a log about twenty times, despite what Sigourney Weaver says about it being never-before-seen footage. According to Planet Earth, pandas eat bamboo exclusively, which creates a problem. Bamboo has so little nutritional value that giant pandas can't store up any fat for the winter in order to hibernate. This strikes me as evolutionary foolhardiness. Combined with this is their notorious reluctance to breed (at least in captivity) and the fact that they have one cub at a time (they abandon the second adorable animal to die if there are twins, according to the captivating Miss Weaver) and it's really no wonder these animals have been the symbol for endangered species for so long. I say let them go out with a bang and have one big ass panda hunt in China. 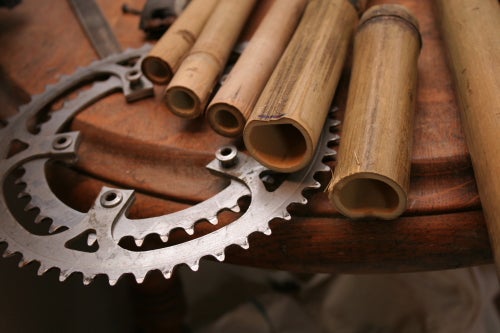 My life for the past two weeks. Bamboo and bike parts. I would have never guessed that bamboo would smell like popcorn when it burns. It does, just don't ask how I know.

Since I am not at Oberlin, and updates on my bike's progress every week would be all kinds of boring, my next two entries will be arts reviews from my first semester at Oberlin. The first one was an award-winning movie, Darius Goes West, shown in West Lecture Hall in November. The entire cast and crew were there after the movie and we got to visit with them afterwards. The second performance was a play called Vietnam 101 performed by Oberlin students, and written by an Oberlin alum, Rich Orloff. It even took place at Oberlin, I felt like such a yeoman after seeing this show.

I was looking for something completely different when I found this in Googles results. I was in fact, looking for some information regarding plumbing, but it was interesting that you have used this one word in your post and you were on page three of Google.

All the same, you have made me smile and I enjoyed reading your post. I have now bookmarked your page and will drop by periodically, as I know nothing about RSS - creeps, I'm a plumber, not an IT specialist!

Well thanks! I've gotten some other comments claiming that you can't follow my blog specifically using RSS anyway. Glad you happened upon us.