It was an incredible week--seeing characters from the Iliad on vases in museums, learning from my Oberlin Classics major boyfriend about a crazy emperor who made a horse a senator, eating Nutella flavored gelato while walking along the Tiber--but by far the highlight was a private cooking lesson we stumbled upon.

Chef Andrea Consoli of Le Fate restaurant in the hip Trastevere neighborhood ushered us unto his family restaurant's kitchen and kicked us off on our quest for a four-course meal. Between specific directions (cut this, boil this) he gave us tidbits of Italian wisdom, such as which wine to drink while cooking and how to make a plate of food as appealing to the eyes as the mouth. 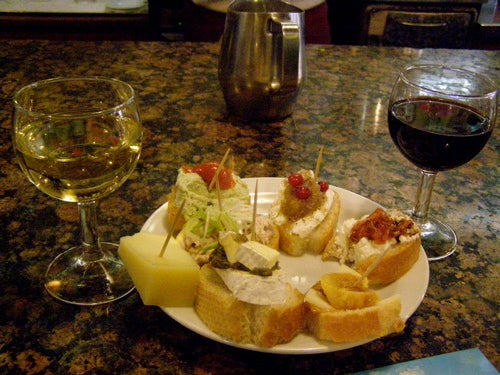 As we were chopping vegetables, Chef Andrea said to my boyfriend, "Not to be rude, but why is she so much better at it than you?" I explained that I was in OSCA, the Oberlin Student Cooperative Association, and helped cook all my own meals, while my boyfriend has always eaten in the grab-and-go dining hall. All my veggie chopping finally paid off! The chef later complimented me on my cooking skills, saying that "the way an artist uses a pen, a chef uses a knife" and later telling me I was hired in his kitchen (I wish!). I once again felt that joining OSCA was the best decision I ever made at Oberlin.

Once we had cooked everything, Andrea served it to us course by course, and sat with us talking about food, agriculture and American shortcomings. I was able to throw in a lot I learned about how food is grown from my Environmental Studies 101 class, and was thrilled to learn that the restaurant only bought ingredients--including wine--from the local region. I bragged about OSCA's very own garden, where we elect student gardeners to grow our own vegetables, just down the road. We toasted a condemnation of fast food and big box stores and he promised to e-mail me all the recipes we'd used so I could cook them myself for the coop. I plan to do this at my "Special Meal" next weekend. Besides electing permanent "Head Chefs," every Saturday dinner and Sunday lunch is "Special Meal," which gives other students an opportunity to plan and cook a themed meal of their choice. Mine? Roman Holiday, of course.

My dear Alice, everything you worte is true, and you're hired in my family restaurant as soon as you'll decide to come back to Rome. Getting to know Emelio and yourself was such a great pleasure, and we had an amazing time with great memories from the cooking classes. I'm available to send you new recipes as soon as you'll require them, in order to give you a good chance to spend other "Special Meals" weekends in a unique and flavourful way! Of course everything will taste very roman style......and i bet all the students from Oberlin campus will love it! A big hug and thanks for your sweet comment! Andrea Consoli Sous Chef Le Fate Restaurant - Rome, Italy

That is such a warm response from the chef. Thank you for sharing this. Looks like you have a great source of income in Rome should you wish to live there!