Last weekend I was so busy I barely found time to stop and admire the hyacinths. It was a weekend I'd wish on any prospie, so I wanted to share it with you. I don't think it's terribly useful to tell you all about my weekend in the boring old preterit, so I tried something a little different instead. I don't know if you're a cook, a partier or a late-night-studier, but I do think this is a fairly typical weekend for many Obies, and I'd like to invite you to be one for a while.

Friday night begins, by rights, with pizza night. You have an hour of free time between bio lab and your pizza shift, but there's no reason not to spend it in the kitchen, enjoying the atmosphere: the smell of gently bubbling tomato sauce, chopped veggies, and risen pizza dough; the jazz Peter prefers for cooking music; the intermittent conversation. Also, the luxury of not chopping onions. Enjoy that. You will be chopping onions often.

If you were there last Friday night, you'd have aproned up at 5:20 and started making pizzas. You'll be on your fourth - a sauce pizza heaped with cheese and olives and sprinkled liberally with oregano - when another prospective student stops by! She'll ask all the right questions: about the culture of Keep and the other co-ops, the food, the night life, the community. You will fondly remember your own confusion as a prospie and be glad you ended up where you did.

Anyway, you'll dish out pizzas for the next hour and a half, taking plenty of breaks to sample the goods. Meryl will make a frosted spice cake as a pizza-night treat. You'll marvel at what our makers can do with whole wheat flour and Earth Balance, then peek into the dining room as she takes it out to watch everyone else marvel, too.

After pizza night, you might choose to accompany some friends to a concert by Kate Campbell, a folk musician who grew up in Birmingham in the 1960s. She'll sing about the South, about signs and omens, about what it was like as a little girl growing up in the desegregation era, between the wave of hate and fear and the courage and love that faced it. Some people will cry. You will probably be one of them. I was.

The concert will last so long that you'll decide not to go dancing, but you might go to the Cat for an improv show. It's one of those nights that the wind picks you up and warms you all over. You could almost believe it was spring, and you can't face bed so early on such a night, so you and your friend Peter will head south for a very brief swim. (Have you ever gone swimming in Ohio in April? Very brief.) You'll meet up with friends, one of whom will swim for several minutes because she is secretly a polar bear.

Saturday morning you'll wake up to more cooking! You'll have to chop onions for an hour, but you might not mind - as the only KP that morning, you'll pick the music. You might also be subbing for a first-hour cook, in which case you'll thoroughly enjoy the bantering industry of a bustling kitchen. After a delectable brunch, you'll spend the afternoon in your friend Brenna's room with tea and naan, studying for your online bio quiz, and eat far too much of a wonderful special meal featuring bacon bits. And then it will be time for the Romp.

The Dandelion Romp is actually a whole weekend of workshops, dances and extravagant contra, but you are so busy you'll only go Saturday night. We have contra dances every month at Oberlin, and they are all fantastic, but the Dandelion Romp is the best. The dance is one of the handful of memories that you will keep safe for your entire life. You'll arrive at eight and dance until midnight without a break. Whether you are in a twirling skirt and sparkling scarf or barefoot in a T-shirt, you will feel beautiful.

There will be bands and callers from all over the country, but the best part will be the dancers. You will dance with your friends and with strangers, exhilarated, borne aloft by music. One dancer from Pittsburgh will catch you up effortlessly and twirl you after every swing. You will stomp and swing and allemande and you will smile until your face hurts. At the last dance, Giant Robot Dance will play Firework and your friend Josh will twirl you until you aren't quite sure, at the end of the dance, whether you danced or flew. 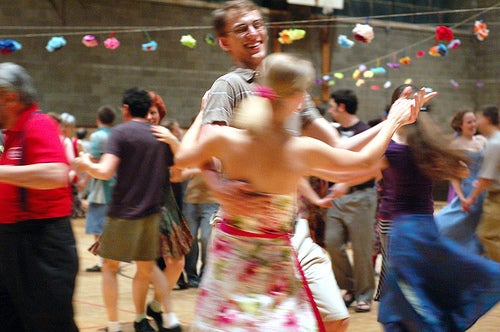 This picture was taken at the 2009 Romp by our own Ma'ayan Plaut. For more photos of the Romp, check out her flickr.

The next morning is Palm Sunday, and if you are Episcopalian, you'll go to Christ Church Oberlin for a celebration of Passion Sunday. Or you might attend service elsewhere, or sleep in, or enjoy your weekend New York Times and a lovely croissant with orange juice. Afterwards, you will have a delicious brunch, and then rush off to the Multifaith Center to meet for the day of service.

There are eight sites at which you could be working, but you'll go to the George Jones Farm, which supplies OSCA and CDS with much of our fresh local food year-round. They say there's always work on a farm, and it's true: you and your groupmates will work in the sun until late afternoon, harvesting dandelion greens, tying up grapevines or hauling wood. The wind will plaster your clothes to your body, but you won't care, caught up in tending to a wayward grape branch and joking with your friends. 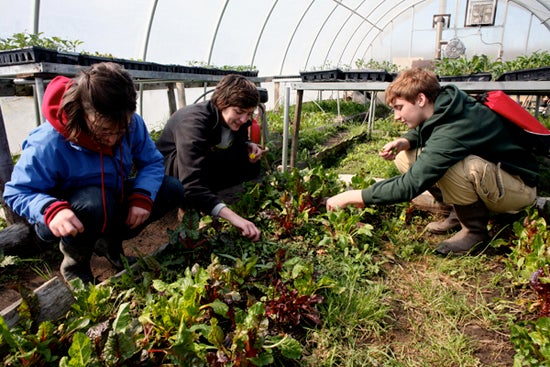 Me, Heather and Charlotte picking greens at George Jones. This picture is © John Seyfried.

You'll bike back against the wind and have not enough time for reflection, because there's never enough time for reflection, but you'll enjoy yourself anyway and take plenty of free pizza. Don't forget to bike back to Keep and pick up the cereal for ECO! You will enjoy the discussion on Palm Sunday and preparing for Jesus, then get reminded in the nick of time to turn in your housing deposit for OSCA next year.

You will then meet your polar bear friend in the street. She will remind you, serendipitously, that the house meeting for next year's Harkies started at eight. It's eight-thirty, but you'll get there in time to meet a provisional roommate and scout for rooms together. You will manage to get a room with balcony access! You will not use the balcony next year, because that's against the rules, but you will enjoy the view of Harkness Bowl. Your provisional roommate will agree to keep lots and lots of plants, and you will have visions of squash and tomatoes, but you know you'll be mostly growing herbs - basil, oregano, maybe sage and rosemary - fragrant and luxuriously alive.

That's exactly how you'll feel when the weekend is over, even after a long Sunday-night crew and some late-night homeworking: content, hopeful and busily, luxuriously alive.

Griff! What a lovely post. You've captured so much about what makes Oberlin exciting: a profusion of interesting events, and an abundance of lovely people. Your weekend is a great snapshot of the diverse possibilities of how we Obies can plan our time (or decide to be completely spontaneous). Also, dancing at the Dandelion Romp definitely made me feel like I was flying.

Thanks for the lovely comment, Nora! and for the correction!

I have had this weekend before, and I love love love it. So totally beautiful :)

April is such a wonderful month. I'm glad we highly encourage visitors during that time.

You're in Harkness next semester? Awesome! I love the balcony rooms because you can just perch on the windowsill and people-watch your way through reading during the afternoon. Most lovely.

Enjoyed your post. I lived in Harkness 1959-60 when it was a senior women's dorm. I met Smith there and it was from my dorm room in Harkness that I drove down to Christ Church to our wedding Commencement Weekend, 1960. Fifty plus years....

Griff, your blogs are always beautiful. :)

Your weekend was as busy as mine, but you have found the time to write about it--I salute you.

Also, thank you for making me look up the word "preterit"!

so beautiful. you should have a clock or a text message or a sign on your keep wall that changes everyday but that says the same thing always: you are the most amazing person, and you are loved beyond the stars by so many, always.
you are the best of everything.
and you provide the proof in every word you write.

Be very, very careful - polar bears are one of the top predatory lifeforms on Earth and stalk, kill, and eat people as often as possible. "She will remind you, serendipitously, that the house meeting for next year's Harkies started at eight." And she'll tell you to bring a pocket full of seal blubber. And we'll never see you again. 'Til then & even after then - we love you forever - Dad

Your writing is like the words of the Leonard Cohen song/poem "Suzanne". Nice. Maybe you can both fill the living room at Harkness with plants and cheer the place up a bit.

Great post, Griff. Such a classic Oberlin weekend. We can never get enough of those. Congratulations on being in Harkness next year! If I get into dining (knock on wood), I will see you there often.

Thanks for the comments, everyone! Ma'ayan, you'll have to meander through Harkness Bowl once in a while so I can heckle you. (Our just wave. Whichever.) Tess, thank you and you're welcome!

Midge, what a sweet memory! The more things stay the same, the more they change. It's the same old building but a whole new crowd ... did you have parietals? I know friends at colleges that still do, but these days no one in Oberlin even knows what that means!

Mom, your comment made me tear up a little and then laugh out loud ... and Dad, thanks for the warning. I'll watch out! Love y'all too.

Woody, I like the lounge, but it would be great to get a nice shrub or something. Maybe a ficus. I feel like Keep might steal it, though. Who knows?

Spike, thanks, and good luck! Hope to see you there this fall! Also, I just knocked on the table for you, but I'm pretty sure it's just fake wood so I hope it still counts.