In this blog post, I am going to try and compare Oberlin College to Yale University to the best of my ability. My primary purpose here is to give some level of insight to high school students currently involved in the college application process. As a disclaimer, I want to remind my audience that I cannot account completely for my own bias, nor can I alter my own perspective as a human being. Throughout my entire visit to Yale (which, in case you were wondering, was about four days), I tried my best to keep an open mind. What follows are my conclusions, as well as my general observations about life and learning at Yale, as well as how they differ from life and learning at Oberlin.

I spent a lot of time with my nose in the air and a crick in my neck when I visited my friend at Yale this week. The place has no small reputation (or endowment for that matter), and the buildings live up to what one would expect of an Ivy League school. Yes, Yale is indeed larger than life. The only problem with a place built for giants is that none of us really are. Why build dining halls forty feet tall when the tallest among us hardly surpasses seven? 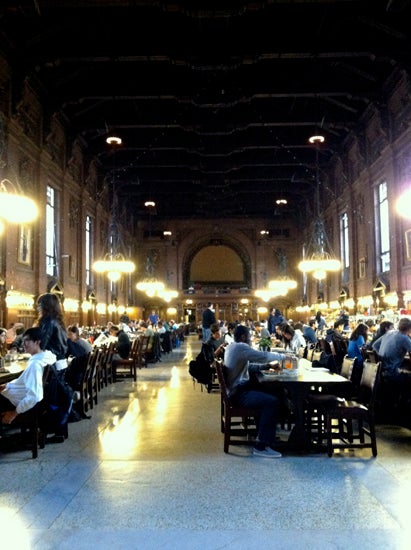 Commons: the dining hall most reminiscent of Hogwarts at Yale.

Walking around in the shadows of looming towers, one of the tallest of which is not, as I first thought, a giant cathedral, but a gymnasium, it is hard not to feel small. Small in an intimidating, you-are-nothing-to-the-world sort of way. Being in a place with such a strong tradition of... well... tradition gives one a feeling of desperation. Changing the world might not be as easy as we thought it would be. Changing campus policies definitively won't be as easy as some Yalies thought it would be. 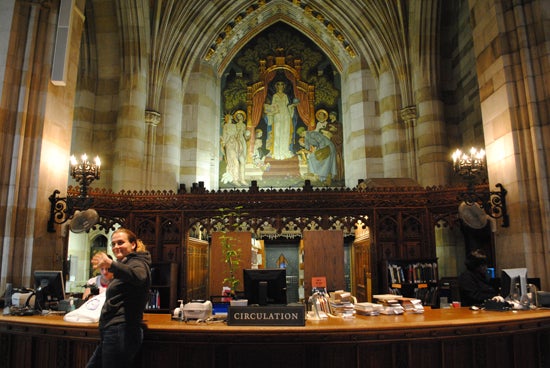 The circulation desk in Sterling, the main library at Yale. It is literally exactly like a Catholic cathedral in there.

My friend Aleena is, like myself, an aerialist. Since her admittance to Yale last April, she has been persistently trying to persuade Yale into creating an aerials club. So far, she has been exceptionally unsuccessful in her undertaking (through no fault of her own, however; she is an incredibly insistent person). Another student I talked to, who happens to be the president of student government at Yale, has also encountered a lot of frustration with the bureaucracy. It seems like Yale's modus operandi is, as he put it, "if it's worked for three hundred years, it'll work now." 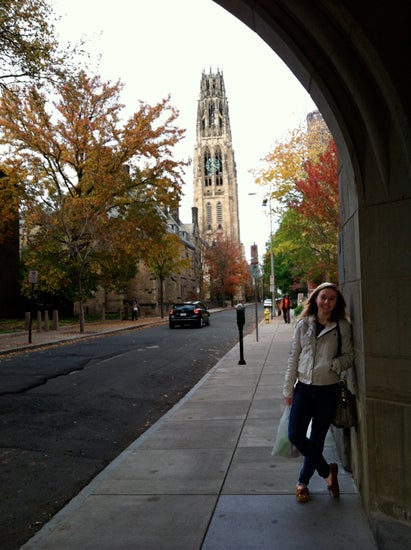 My friend Aleena. Look how cute she is!

Yale is a place filled with what college admissions officers would tell you are the best of the best, the cream of the crop. I mean, in what other place than an Ivy would you hear words like "penultimate" and "orthogonal" in casual conversation? (This actually happened to me.) It's true that people here in general really are quite fantastic in their achievements, and incredibly hard workers. There is, however, a certain lack of empathy, of community awareness, that is pretty noticeable. When I'm at Oberlin, I always look everyone directly in the face as I pass. I say hi to everyone I kind-of sort-of recognize from somewhere. I have no problem talking to a complete stranger because I know I'll be met with acceptance and kindness. At Yale, however, it seems as though the prevailing attitude is more of the every-man-for-themselves variety.

I don't want to give off the impression that Yale is a terrible place filled with preppy snobs, because that's not the case at all. In fact, everyone I met there was as friendly and inviting as could be.

The truth of the matter is that people adapt to their surroundings. Although one could certainly generalize and say that Yale is filled with stuck-up, preppy geniuses, one could just as easily say that Oberlin is filled with chain-smoking, hippie vegans. Is either true? Yes. And no.

The college you choose (and the one that chooses you) will irrevocably change the course of your life. It will undoubtedly determine the opportunities offered to you, shape your attitude towards higher education, and change the way you perceive the world. It will shape you as a person, whether that person be a highfalutin Yale graduate or an aimless Oberlin alum.

This is a scary thing. It's easy to water things down and be assured that your destiny is what you make it, but let's face it--location is everything. You can choose your own path only to a certain extent. A large part of your life will inevitably be determined by where you are at any given moment in time, who you meet, and what you say to them.

Yale is a place with bountiful opportunities. It may be completely intimidating to be surrounded by some of the best minds in the country, but for some it is worth it. I know at least for my friend it certainly is.

For me, though, Oberlin is home, and of that I am absolutely sure. There is a different kind of learning that goes on at Oberlin that I don't think happens at most other schools. Both in and out of class, there is a certain lack of convention that all Oberlin students learn as their own.

Oberlin, like Yale, was founded on tradition, though of a different kind. Since its conception, Oberlin has maintained a strong tradition of progressivism. Its somewhat unorthodox methods of doing things force students to think outside the ever-expanding box. At Oberlin, we have classes taught by students, we have co-ops, we have an aerials club. At Oberlin, we don't feel the need to impress others with our fancy words; we only feel the need to impress upon people our radical ideas.

At Oberlin, we pave the way for future generations without making a fuss about it. In quiet, rural Ohio, things stir. Maybe not everyone will know where you attend college when you proudly declare, "I go to Oberlin," but that's okay. It is the quiet, hidden gems of institutions are always the most worthwhile. Not everyone would agree with me on that, but then again, not everyone is an Obie. 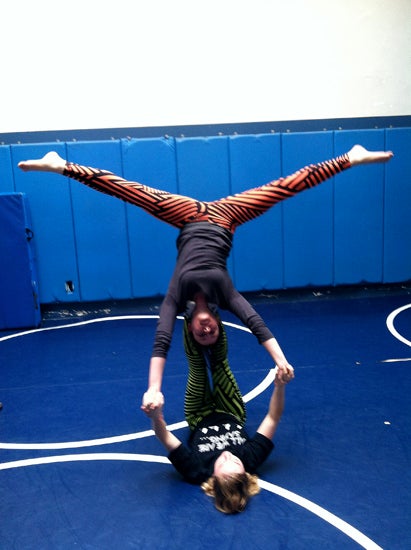 Aleena and I utilizing her gym facilities to their fullest extent.

Interesting to read, and well written. I grew up in New Haven and went to Oberlin. I took 2 classes at Yale during my last year of high school, and I found that many of my stereotypes of what a Yale student was like were altered (...and others were utterly confirmed.)
Just to say, though: orthogonal (and to a lesser extent, penultimate) were often heard coming from my and my peers' mouths at Oberlin. But maybe that's math class's fault.

Loved this post. Since I've been here, I've realised that all the things I like about Oberlin are the things that I wouldn't call 'institutional,' like the way the system here really encourages free thinking, flexibility and progress. One teacher here said to me, 'in the end, bureaucracies are always run by people.' Other institutions that I've experienced (e.g. University of Cambridge, which is, as you describe Yale, 'built for giants...that none of us really are') don't seem to realise that, and I think they end up shooting themselves in the foot because of it. Let's hope things keep stirring in rural Ohio!

Why build for giants? So you aren't ever cramped. And because HOGWARTS DINING HALL.
Regarding looking people in the face, saying hello (or not): the converse is not a Yale thing, it is a northeast urban thing, in my experience. It infected me when I was in New Haven, and took a while to shake off.