The Oberlin in NYC Tour was a success! I thought I played really well, and I thought the percussion section knocked it out of the park. I played in all four pieces that were on the concert, so I was on stage for about two hours. It was extremely exhausting and nervewracking, but it was a fun experience. This was also my first time in New York City.

Here is a day-by-day recap.

We had a "pre-tour" concert for those in Oberlin. This was a great practice run before Carnegie. I felt completely exhausted afterwards (in a good way) - all of the percussionists were constantly moving equipment between each piece, because they all required different instruments. I didn't feel too nervous, though, surprisingly. I think it was because of all of the rehearsals. I felt super prepared, and it was nice to not have too many nerves for once. I was hoping this meant that I would be at my normal level of nervousness during the concert at Carnegie. There were more people there in the audience than I thought there would be - I felt like most of the people here during the Winter Term in the Conservatory were the ones going on tour, so I was not sure how it would turn out. Anyways, I thought both of the ensembles did awesome, and I felt good about the performance as well.

We had a rehearsal in the morning in Finney Chapel for orchestra to check over some spots, and we also had a small pep talk from our conductor, Raphael Jimenez. Then choir started to rehearse, and we went over a few places in Les Noces. Greg Ristow, the choir conductor, let the percussionists off early so we could start packing all our instruments for the bus trip. It didn't take too long because we rented most of the bigger instruments (marimba, timpani, xylophone, vibraphone, etc). We mostly had to pack little auxiliary instruments and our own cymbals.

As usual, all people with large instruments (percussion, harp, bassists, etc.) had to arrive earlier than everyone else to load the buses - however, the buses were not there yet. So that put us a bit behind schedule, but thankfully, all our equipment fit under the bus. We departed Oberlin around 10am, and we also received a per diem so we could buy food in New York.

My bus buddy was my boyfriend, Jonathan, who plays violin. About an hour into the trip, the buses stopped randomly to do a driver switch, which was unexpected, and that also put us a bit behind schedule. But we kept going. Our route to NYC was almost exactly the same route I usually take to Oberlin from my home in Pennsylvania, so I was super familiar with it. The interstate we took was I-80 East, which goes the entire length of PA (and PA is a super long state), so the bulk of the trip was comprised of us riding through the whole state. We had to take a detour through a small town because I think there was a traffic accident. We stopped at a McDonald's, which is one of the same ones my family usually stops at when they take me to Oberlin. It weirdly felt like home, even though I heard a lot of complaints regarding the food options - what can I say, I-80 isn't that exciting, and there are certainly not any five-star restaurants to stop at.

We went through New Jersey to get to NYC, but that did not take nearly as long as crossing the length of Pennsylvania.

By 8pm, we finally arrived in NYC. I think this trip was the longest I have ever been on the bus, but I am glad I was able to spend it with all my friends. I mostly took naps, listened to music, and talked to people to pass the time. I am jealous of the people who can read and watch movies without getting motion sickness.

Seeing the city at night for the first time on a Friday night was amazing and breathtaking. I don't think I'll ever be the same again.

I got to see my hotel room quickly, it was super nice, and we stayed in a place that is a short walk to Carnegie Hall, Times Square, and the Rockefeller Center.

I went to Rockefeller Center first to look around. I saw the famous ice-skating rink. A lot of the shops there were closed by the time I got there. But I did get to go to FAO Schwarz, a huge toy store. That was super fun, and I liked looking around. They had a built-in Build-A-Bear Workshop, and I was half-tempted to stuff my own animal, specifically, the Pikachu.

I was pretty hungry by then, so off to find some tasty food. On the way, I saw Radio City Music Hall from the outside, which was so cool! 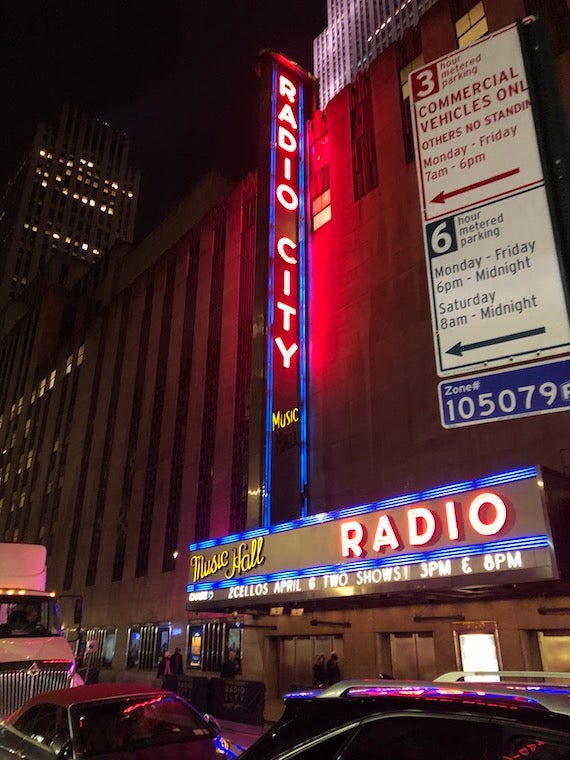 I ate at a small pizza place called Nino's 46. Even though it was dimly lit and had candles on the tables, it was pretty cheap for a sit-down meal.

Afterwards, I headed for Times Square. The lights were so bright, it looked like it was daytime. There was a HUGE Forever 21 with four floors, which was exciting, I had never been to a store that big.

There was also a Hershey's Chocolate store, and Herhsey is close to where I live in PA, so it was a little taste of home. Not as good as actually going to Hershey though, but it was cool to see a huge store like that.

There was also a big Disney store, which was so cool. I have not been to a Disney store in forever because most of them around where I live had closed down. My boyfriend got me a Stitch plushie from Lilo and Stitch.

All in all, it was an awesome day, but it was a very long one too.

Today was another early day for the percussionists as well as the harpists. We were able to move and set up for our dress rehearsals early in the morning. First Marjorie (our stage/technical director) took the harps to Carnegie in a van, while I walked there with Leah (our personnel manager) to meet the equipment. The harps made it to Carnegie, but when Marjorie went to go back to the hotel, the Women's March began, which made it really hard to get back with traffic and roads being blocked up. As a result, the rest of the percussionists just carried our gear to Carnegie. Then we also had to walk back to get the step-stools the choir used for risers. Good thing the stage crew at the hall let us borrow some carts. And so I was walking through the streets and crowds of NYC pushing a huge cart. Not something you do everyday.

I think the percussionists were some of the first Obies on the stage that day. We got everything set up and got all our rental gear. We quickly grabbed lunch at a Chipotle before all our rehearsals began. 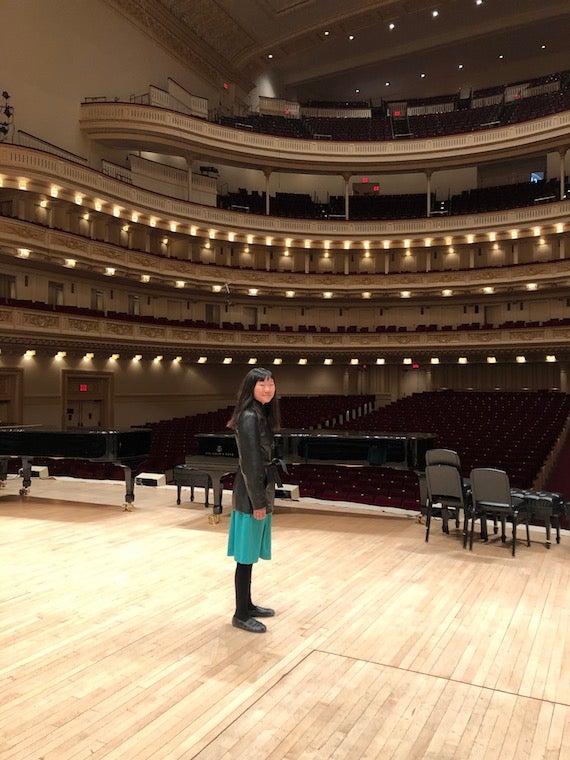 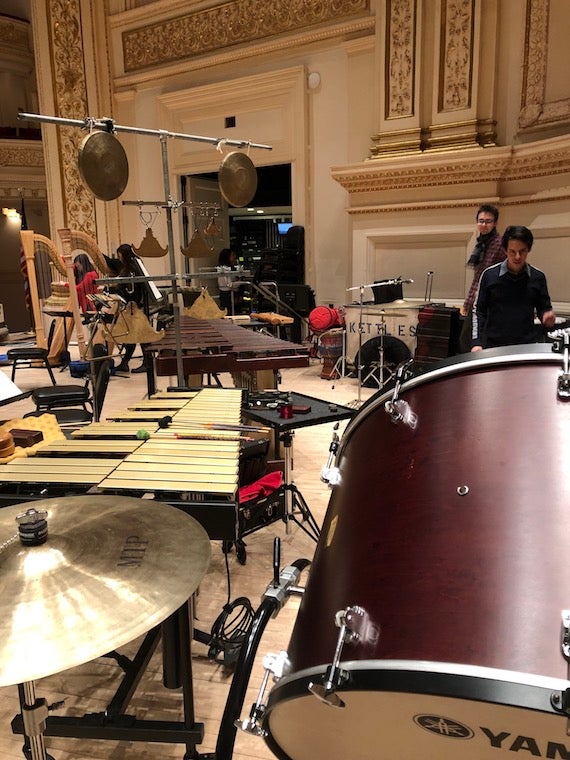 Rehearsals went well, and the acoustics in Carnegie are amazing. Prof. Rosen was there making sure we sounded good from out in the audience. Before I knew it, I quickly had to get something to eat for dinner and get dressed.

The time inched closer to 8pm, and all of us were waiting to walk out on stage. By then, I was super nervous, and I was hoping I didn't pass out. I definitely kept my knees bent for the first half of the concert. Triptych went well, and I'm glad the piece was first so I could get relaxed and situated being on stage. I had almost an hour and a half to go at that point. Les Noces was fabulous, and I definitely felt less nervous by then. I think the most nervewracking part in that piece is the very ending. I am playing crotales in unison with chimes and pianos, they are supposed to sound like church bells. If anyone is too early or too late, it is really noticeable. It was all good, though. I think it was one of the best times we had played it.

Two down, two to go!

I was feeling more comfortable being on stage by the second half of the concert. Setting up was much easier because the hall is bigger than Finney, and we rented extra equipment. All These Lighted Things went great, but I think I was more nervous for La Mer. I was playing glockenspiel and tam-tam. The glockenspiel is an important orchestral excerpt for percussionists, and it is very exposed, so wrong notes really stick out. I'm glad this piece was the closer, because by then I felt the most relaxed. I was actually able to enjoy myself a little bit. Everyone was on point, and I felt really happy about how everything went.

The choir was supposed to go to the Eastman School of Music in Rochester, but because of all the snowstorms, the concert was cancelled. My parents didn't make it up to Carnegie either (from PA) because they didn't want to take the chance of it snowing really bad.

We were supposed to get up early to load percussion instruments, but the time was pushed back because the buses weren't at the hotel yet. Then the whole departure time was pushed back. I think it was because the roads might have been bad. We got on the bus around 11am, and then we were informed that one of the buses needed to be repaired. As a result, we got an extra hour in New York. I was pretty happy, I was only really able to see the city on Friday night, so it was nice to walk around. I was in Carnegie all day on Saturday, and after the concert I didn't go out. I wish I could have seen more, but I am just happy I was able to spend a little time Friday night seeing the city for the first time. The Conservatory bought us NY pizza for lunch while we waited.

By 1pm, we were on the road. I tried sleeping for most of it. I got to see a view of the city from far away for the last time. I hope I'll be back soon. It got colder as we went west towards Oberlin, and there was more snow.

We finally arrived back in Oberlin around 11pm. We unloaded all the percussion gear, and I went straight to my dorm to go to bed.

So there you have it, folks! I had a terrific and unforgettable time in NYC. The sights were amazing and the performance was spectacular. These past two weeks went so fast, it was really over before I knew it. In some ways, I found it was hard to really live in the moment and enjoy it because I was constantly on the move, but overall, looking back, it was a highlight of my Oberlin career for sure. But all good things must come to an end, and the "tour magic" is gone. Coming from an extremely rural town in PA, I loved NYC so much. There was so much culture and so many different people, and after this visit, I don't think I'll ever be the same again. 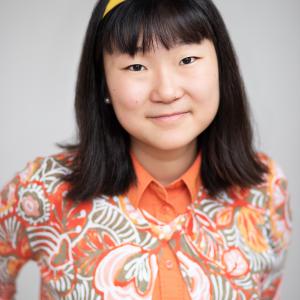 Thanks so much for giving us all a day to day journal and photos of your wonderful New York trip!!