I've blogged before about the advantages of going to college in a small town, its potential for focusing the educational experience and enhancing the sense of community. There are good reasons why so few liberal arts colleges are located in cities, after all.

On the other hand, there's a great big world out there. Another terrific aspect of Oberlin is how easy it is to spend a part of your college experience immersed in international experience. And students tend to take advantage of this opportunity: the latest estimate is that more than 80% of Oberlin students study abroad. From Winter Term trips to summer research assistantships to semesters abroad, Obies can be found around the globe at nearly every moment of the year. Our Study Away office provides a great deal of information and careful advising to help you discover the program abroad that is right for you. Oberlin sponsors several programs of its own (such as in Cordoba, Spain, and Arezzo, Italy), it is part of a couple of consortia of colleges that offer others (e.g., Dakar, Senegal, and Tokyo, Japan), and if none of those programs meets your needs, there's a long list of approved programs to which you're able to apply.

The program nearest to my heart is the Danenberg Oberlin-in-London program. Ever since 1974--first as an English Department program, and then as an expanded program open to students and faculty from many different departments--Oberlin has been sending students to study in one of the world's most exciting cities. In its current format, each spring two faculty members from different departments select about 25 students to study a London-oriented curriculum with them. (The courses change every year, depending on the particular interests and expertise of the faculty.) Our London headquarters is in the very center of the city, on Great Russell Street, just a block away from the British Museum in Bloomsbury. But the fact is that London itself becomes our classroom: courses are designed to take full advantage of the resources of London, so that classroom study becomes integrated with the place where we're living and working. 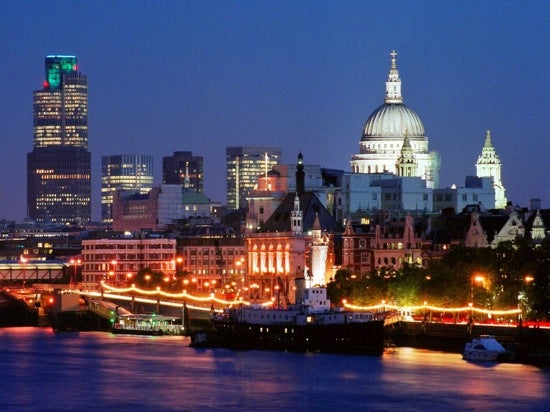 London is one of the most cosmopolitan and culturally diverse cities on the planet. For those of us interested in British literature, history, politics, painting, and music, there is of course no better place for studying these things. But London has also been for centuries one of the world's great crossroads, where different cultural paths have intersected and fertilized each other. It's a city of neighborhoods, each different in character and atmosphere, each worth exploring and getting to know. You may have been lucky enough to visit London previously, perhaps on a family or school trip. But if all you've seen of London is Big Ben and the Tower of London, you haven't begun to scratch the surface. London is highly diverse and multilayered, and it takes a longer visit to begin to have a grasp of its complexity. A semester in London can be a thrilling experience.

What makes Oberlin's program distinctive is in the name: this is truly "Oberlin-in-London." While the urban context is completely different, what travels to London is our commitment to the value of intensive, engaged study. I once had a student who decided to study in London on a program run by a different university; a couple of weeks after it started, she told me she was miserable because--in her words--"everybody else is here just for the shopping!" None of her classmates were invested in what they were studying, so nobody else showed up for class with any enthusiasm. In the Oberlin program, on the other hand, students bring the same sort of motivation and personal stake in their learning that they do at home. Moreover, since it's a small group of students doing all their work with each other, they get to know each other extremely well, and they tend to develop close bonds that have definite benefits for the kind of exploration they're engaged in: they trust each other, so they take more intellectual risks, allowing the interchange to build up speed and subtlety. 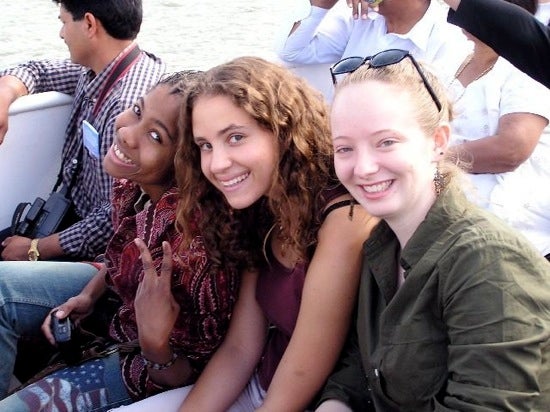 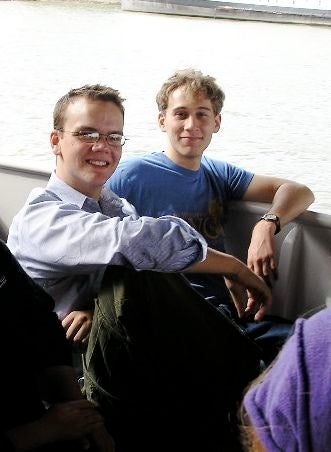 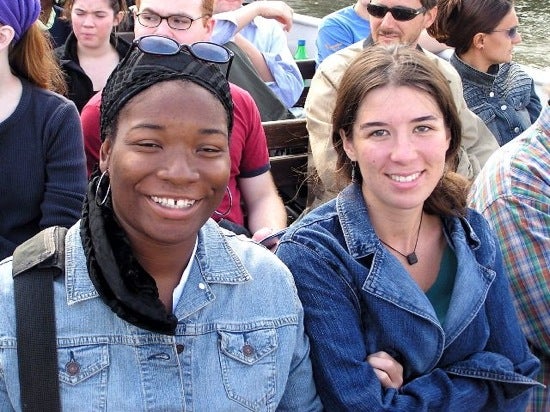 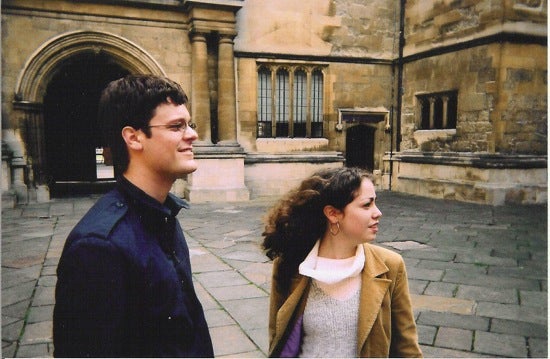 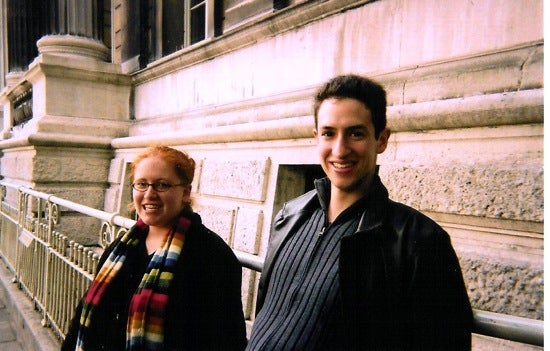 Obies on a field trip to Oxford. 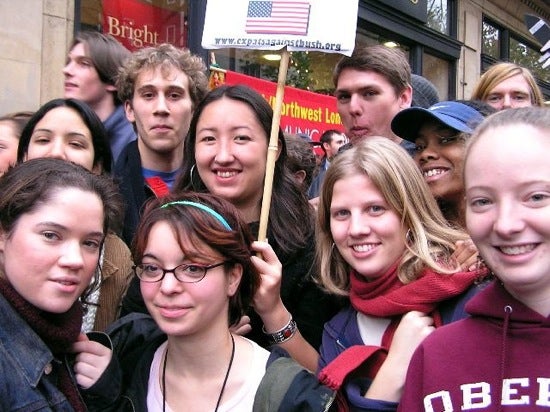 Obies protesting the 2003 invasion of Iraq.

And it's not just the students who are changed in the process. I have taught on the London program five times, and those five semesters have been the highlight of my teaching career. The first time I taught in London profoundly affected me as a teacher: I felt much more personally connected to the students, more willing to share my own experience. It's partly just a matter of exposure: I try to get to know all my students in Oberlin too, but I usually see them just three hours a week or so. In London, we're all in the classroom together 12 hours a week, plus the time we spend together at the theater, on field trips, and in casual talks over coffee or meals. But it's also something less definable: the excitement generated by being in London seems to raise the stakes somehow, so that everything seems to matter more, and everybody seems to register that something truly special is happening. It's one thing--and a terrific one--to study Shakespeare in Oberlin. But it's another thing to discuss Hamlet in the morning, and then to go see a production of the play by the Royal Shakespeare Company that night, and then to have the lead actor come to our class the next morning to talk with us about it. Under those circumstances, how could everybody not want to be fully invested? 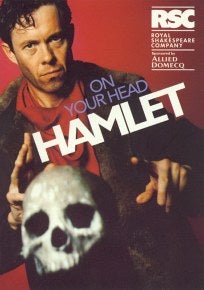 Alex Jennings--he really did come to our class.

It's no surprise, then, that virtually all the students who've studied with me on the London program have said that it was their most valuable Oberlin semester, the one in which they changed and grew the most. But you don't have to take my word for it: here's what a student from my very first London program had to say recently. Her name's Tracy Chevalier, and you may know her as the author of Girl with a Pearl Earring and other novels:

When I was an English major at Oberlin in the early 1980s, the London Semester was the crown jewel of the English Department. Most serious English majors applied for it; the few who went on it felt incredibly privileged. We had studied literature among the cornfields of Ohio; now we were going to the source of the spring.

Being in England made sense of what I could only imagine before--Jane Austen's Bath; Virginia Woolf's Bloomsbury; Thomas Hardy's Dorset. I became a more informed reader while there, more sensitive to the texture of place and culture. And going to the theatre 2-3 times a week opened up a whole new art form to me, as well as the critical tools I needed to analyze and discuss it.

But my experience was not all intellectual. The London Program changed me in other ways too. Before it I had not travelled a lot, nor thought much about other cultures, other histories, other perspectives. In London I had my first Indian curry. The first time I heard a person of color speak with an English accent was in London. I raised my first pint of Guinness in a pub in London, where I heard firsthand IRA sympathizers explaining their twisted logic. In London I was for the first time criticized for being American, and it made me think about my mother country's politics and my own responsibility for my actions. None of this would have happened if I had remained in Oberlin for that semester. I fell in love with London. Afterwards I knew I had to go back, and moved to London soon after graduating in 1984. I've been here ever since.

The Danenberg Oberlin-in-London program is a mind-expanding experience for Oberlin students. It changed me permanently, opening my mind and my heart to a wider, more varied and complicated view of the world than I would have found in Ohio. Without it I doubt I would ever have had the international perspective to write Girl with a Pearl Earring and my other novels.

Not all my London students go on to become world-famous novelists--but I do believe that the London program is a life-changing experience for most of them.

Abby is going on the program next spring and will be able to blog about it, so stay tuned for details of her experience. And I'm excited that I will be teaching in London again in the spring of 2012, along with my colleague Marc Blecher from the Politics Department. We can't wait to see who wants to come with us.