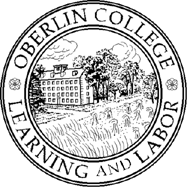 In conversations with prospective students, one of the questions I hear most often is "What's there to do in Oberlin?" This seems to come most often from people who live on one of the coasts. "Isn't it surrounded by cornfields? I'm not sure how I'd manage in the middle of nowhere."

For some reason, people seem obsessed by the image of cornfields. Yes, it's true that in the countryside of Lorain County there are lots of small farms, but there are no cornfields visible from the campus, no cows grazing on Tappan Square. The College seal (see above) is no longer an accurate representation, if it ever was. Once an art student recreated that scene by erecting dozens of cornshocks in front of the library, but otherwise we don't engage with corn on a regular basis. When I get up in the mornings, I look out at a golf course, not tractors. Think small suburban town, not agriculture central.

But perhaps the notion of a small town in itself scares you. The easy response is that Oberlin is not a typical small town in Ohio. In the summer--when the College essentially shuts down, aside from some programs in the Conservatory--it's a pretty sleepy place. Lovely, but sleepy. But at the end of August, when students start flooding back, you can feel the energy rising, and for the rest of the academic year the place is a hive of activity. Concerts, plays, lectures, films, and sports events abound; if you take a look at a week or two of the events calendar you'll get the idea. Students tend to be deeply invested in extracurricular activities, from co-ops to publications, conservation efforts to improv groups, and they devote countless hours to those pursuits. Equally to the point, Obies take their work seriously, spending a good deal of time in labs, practice rooms, and the library when they're not in class. Most students I know--and this is certainly true of the faculty too--don't spend much time sitting around wishing they had more to do. Between the academic demands and the opportunities for entertainment, socializing, and activities, there's always much more going on here than anyone could possibly take advantage of.

This is not to say that someone who grew up in a metropolis won't have some adjustments to make in coming to Oberlin. If you cannot imagine yourself being happy in a place where you can't get falafel or sushi on a 24-hour basis, or where the subway doesn't run all night, then Oberlin is probably not the school for you.

But that leads me to my other, and perhaps more surprising, answer to the "middle of nowhere" question. I would suggest that there are some very real advantages in going to school in a somewhat out-of-the-way place. In the past couple of years I taught students who'd transferred to Oberlin from Harvard and NYU precisely because they wanted to be part of a more intimate community, without the constant distractions that living in a city inevitably imposes. And this issue applies not just to large universities. I have a friend who teaches at an excellent liberal arts college--a place much like Oberlin--about 45 minutes from New York City by train; he tells me that, since a large percentage of the student body takes off for New York on the weekends, the campus itself essentially shuts down. This doesn't happen at Oberlin: we're just isolated enough that virtually the whole population stays in town, and as a result the students learn to create their own entertainment and keep life interesting. If you bring 2800 smart, creative people together in a small town and let them interact, it's no surprise that exciting things are going to happen.

I want to be clear here: I love cities. I get away on a fairly regular basis on breaks and in the summers to New York and London and Seattle. But for me it's been very productive to spend the majority of my working life in Oberlin, where the rhythms of a small town concentrate my energies on teaching, and where at the same time there's so much creative activity to enjoy. Even if you imagine yourself living most of your adult life as an urban type, spending four formative years in "the middle of nowhere" can be a fantastic experience.

I couldn't agree with you more, David. I'm a dedicated urbanite and was pretty skeptical before I came to Oberlin three years ago, but I have never once felt like the school was too rural. It's not just the interesting stuff that's going on here. More important is the fact that we're only forty minutes from Cleveland. (Granted, Cleveland's no New York...) There are a lot of other schools that are WAY more isolated than Oberlin.

I agree as well! I could never feel as involved with local politics (having regular chats with the mayor) in a big city, and I'm glad weekend activities are all on campus and there's no pressure to go out to clubs like my friends in New York City experience.

My personal feeling is that middle-of-nowhere-ness isn't just one among many characteristics of Oberlin, to be enjoyed or annoyed by ... it's an absolutely defining feature. College is a fundamentally transformative time-out-of-time and place-out-of-place anyway, and being in Oberlin represents a maximum commitment to that experience. You don't get the Oberlin sort of deep, immersive education, or deep, immersive friendships, anywhere else.

For those of you playing along at home: John is one of the subjects of my "Where are they now?" post. For the record, I think what he's saying is really important--college *shouldn't* feel like ordinary life. The immersive aspect of the Oberlin experience is a crucial part of its value.

Well, though I am not a current student of Oberlin, I still like to say something about this post. I believe college should be a quiet place, just like Oberlin, a place to study, to make friends, to think. A metropolitan did have its advantages as it offers more opportunities and more fun, but it is not quiet. I actually like those cornfields. LOL. The yellow wavy fields makes me wanna lie down and sleep for a while in the shades. Soon, I would apply as an international student in China. Though I know it's ultra tough to get in, I still wanna have a try.^_^ Anyway, you will never have a chance if you don't try.

For me the point is that ideally the college experience should be a balance of contemplation *and* excitement, immersion *and* diversion. Too much of one or the other wouldn't be healthy, I think. Good luck with your application, Binlin, and let Charles Grim in the admissions office know if you have any questions.