With less than one hundred days until I graduate (ninety-three, to be exact!), my mind as a second-semester senior is fixated on getting everything I can out of the remainder of my time at Oberlin. I love lists, and my freshman year of college I wrote a bucket list of all of the things that I hoped to do by the time I graduate. I’ve added some since then, but I thought it would be fun to see how many of those I have accomplished or done and how many I have left to do this semester:

Tappan Square is an expansive space to the east of the college, a common space between the college and the greater town of Oberlin. There are a couple of giant rocks placed in Tappan that are free to be decorated by anyone inspired to do so. There’s actually a good bit of history behind these rocks, but a past blogger has already done a fantastic job of detailing it here, so I’ll leave that story to them. The rocks have been painted and re-painted many times through the years. Sometimes they’re advertising an upcoming event, sometimes they are celebrating one of Oberlin’s athletic teams’ accomplishments, sometimes it’s a birthday or anniversary message, and every now and then it’s a political message or pop culture reference.

I checked this item off my bucket list in my first semester of Oberlin. I had volunteered at a domestic violence prevention center for most of my time in high school, and every year we had a fundraising walk in October, which is Domestic Violence Awareness month. I was sad I couldn’t participate in the event my first year away from home, so I decided to contribute in my own way -- by painting a message on one of the Oberlin rocks to raise awareness. I picked up spray paint from the hardware store downtown, cut some cardboard from my dorm’s recycling bin into letters, and wore my rattiest sweatshirt and sweatpants. In the dead of night (it actually might have just been an early Sunday morning I don’t really remember), I struck. My final result is pictured below. I was pretty happy with it, although I would recommend wearing gloves so you don’t get as much spray paint on your hands as I did. 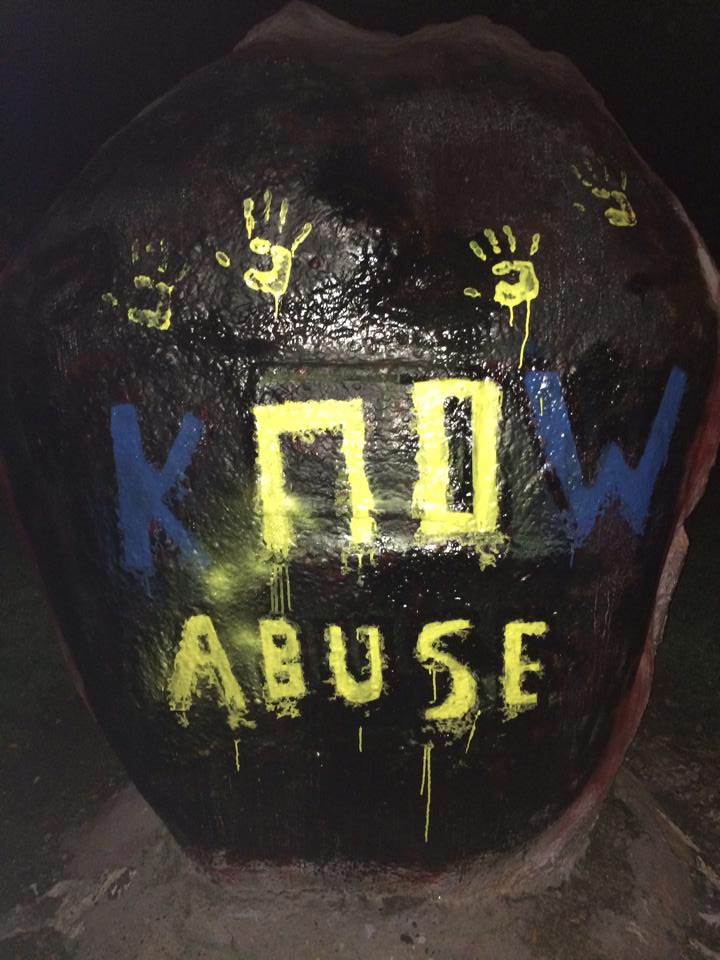 2. Be a Teaching Assistant.

In previous blogs, I feel I’ve written extensively about how I was shaped by the upperclassmen and Teaching Assistant’s (TA’s) of my first year at Oberlin. This left me wanting to become one myself -- it seemed like a great way to connect with underclassmen and to develop a stronger relationship with a professor. This past semester, I was a TA for the Sport, Culture, and Society course cluster. I got to work with three amazing professors and mentor a group of nine students. Most recently, one of those students, Leah, helped organize and host an event with the Athletics Department aimed at fostering a stronger sense of community within the varsity women’s teams at Oberlin.

This semester I am a TA for Language Pedagogy, a course I took a year ago that is required for all Spanish in the Elementary Schools (SITES) teachers. It’s been great to have the opportunity to work with the professor of the class in a different context, and to see the course with fresh eyes a second time.

3. Become fluent in Spanish and travel outside of the country.

When I wrote this goal down, I had taken one class of Spanish in my entire life. Nowadays I have a more complex and critical understanding of the word “fluent,” and I question if I’ll be technically fluent in the language. Despite this, I do consider this item to be more or less checked off. I studied abroad twice in my time at Oberlin, first during Winter Term in Mexico my sophomore year, and then for the fall semester of my junior year. I’ve grown enough in the language to take classes at a Chilean university, to make close friends abroad, and to interview with a branch of the Chilean government as part of my Fulbright application. I still have a long way to go, but that excites me more than anything. You can see more about my writing about my journey with learning a world language at Oberlin here!

4. Get involved in lots of different parts of the Oberlin community.

I think this bucket list item was born out of my lack of connection to Oberlin in my first semester. I was hyper-involved at my high school and in my town, and I initially struggled to find that same connection in college. By the start of my sophomore year, I managed to find a couple of homes. I joined Preventing  and Responding to Sexual Misconduct, a group of students who work for the Office of Diversity, Equity, and Inclusion, and lead and develop trainings on sexual violence prevention for freshmen. I also joined SITES, mentioned in the above paragraph, which allowed me to join a community of aspiring Spanish language instructors and learn more about the wider Oberlin community by working in the elementary schools. I also did a one-year stint as a member of the Oberlin Student Cooperative Association (OSCA) board.

As a freshman track and field athlete, I had a pretty decent first season and placed in the top three of all my events in conference. Winning a single conference title seemed like a lofty goal at the time. Since then, I’ve grown a lot as a runner, and so has my team. Last year, I won 5 individual titles between the indoor and outdoor conference meet, and my team won the first ever outright conference title as a team in the North Coast Athletic Conference for both indoor and outdoor. Hopefully we can do it again this season!

And finally, a couple of bucket list items I haven’t checked off:

My high school superlative was “Class Musician,” and everyone, myself included, expected that would continue to be a focus for me in college. I auditioned for two acapella groups my freshman year, but I didn’t get into either. I auditioned again my sophomore year, and again had no luck. I did record one EP my sophomore year, but I’m doubtful that I’ll be able to finish a second album. Although I didn’t get to do music the way I anticipated at Oberlin, I have managed to perform at Soul Sessions and other open mics, and jam out with my friends from time to time.

The same thing happened with CUPSI, which stands for College Unions Poetry Slam Invitational. I auditioned to be in the Oberlin poetry group three times, but never made the team. I have been able to perform with the group at various open slams on-campus, and I’ve learned a lot about poetry writing and performance from them.

It was a lot of fun looking back at the goals I wrote for myself as a freshman, and seeing how much I’ve changed since then. To incoming freshmen - I would recommend doing something similar, or writing a letter to yourself. It was a great way to think about my priorities in the midst of the chaos that is freshman year, and has been a useful reflection tool now as a senior.