I'm curled up in the basement of my house in Athens, stroking a nonexistent cat. It took me a couple seconds to realize that a fuzzy pair of pajama pants was not my cat Pidar*.

And then my confusion about existent and nonexistent cats brought me back to the semester-old question, Schrodinger's cat. For those of you unfamiliar with Schrodinger and his stupid cat, Schrodinger's cat is a distressing analogy that Schrodinger used to express his dissatisfaction for the physical interpretation of quantum mechanics. Take a cat and stick it in a box with a radioactive substance and Geiger counter for detecting radiation. Then, rig a flask of poison so that it will break when the counter detects radiation and thus kill the cat. The current physical interpretation of quantum mechanics implies that before you open the box to look at the cat, it is neither dead nor alive, but a combination of both states. This is analogous to finding an electron's position: before you measure it, it isn't anywhere; rather, it has a probability of being in multiple positions. It's not that we don't have technology or math advanced enough to know the electron's position; it's that we can't know because it doesn't have one.

I took quantum mechanics this semester, and we never talked about Schrodinger's cat, which is probably for the best. But now that I'm on break, and I don't have to stick to any sort of syllabus, I propose to you my own thought experiment: suppose the box contained two cats of the opposite sex, and that the box was rigged with the same flask of poison, radioactive substance, and Geiger counter. If you waited long enough, could you have part-dead, part-alive kittens? Or would you only have living kittens? Or could you have kittens that were both dead and alive?

Sometimes when I'm tired of physics cats, I think about jazz cats, which, I've learned, is a term for a musician with a knack for sick solos, crunchy chords, and nasty, gritty beats. I used to play a lot of classical piano, but in the past year, I've taken weekly jazz piano lessons at the Conservatory with my friend Jacob, who is a jazz and physics major. It's low-key, but I learn a lot, even if I only practice about two hours a week. I've learned quite a few tunes, and I'm trying to figure out how to improvise. He's also introduced me to some music that's been very good to me on these cold days. Brad Mehldau does a killin' contrapuntal rendition of "Martha My Dear." Listening to it makes me feel quite ill.

Speaking of cats, did anyone think that Puss in Boots was a better fairytale than Cinderella? Is the ultimate social ladder climbing utility actually just a cat in boots? Could I meet Steve Jobs if I put Pidar in boots? I got boots yesterday in anticipation for my Winter Term in Oberlin, so I could probably try it. 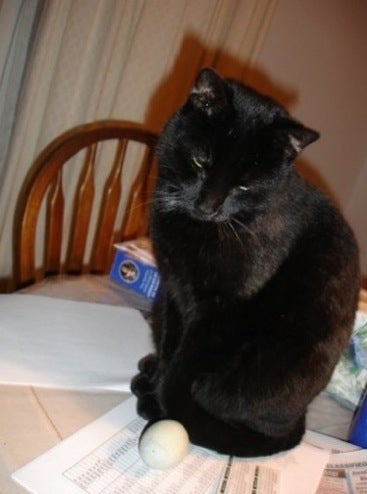 He's named after a type of preserved duck egg, called pidan, found in Chinese cuisine. After the egg is coated in lime for god knows how long, the egg turns black and transparent. The egg at the bottom of the picture is a pidan. I like eating them. However, I have tried to get co-opers in Pyle to like them too without any success.

As a 2015er with no cat due to allergic family members, I'm happy to see that cats either may or may not exist at Oberlin---it's more likely than at my house!

Haha, if you like cats, there's actually a mini cat-shelter located downtown. It's actually a store with nifty crafts, but they keep litters of kittens in the back that need adopting. My cat-inclined friends and I often stop by and cuddle them.

There's also been a mysterious swarm of black cats on campus. I think it's due to one particular promiscuous black cat that used to come by my dorm. The black cats don't let you cuddle them.

And if you don't like cats, most students are not cats.

As cats do not melt my heart of stone, it took me a while to figure out what to write here. But I've figured it out now. One time, I wrote a poem about Schrödinger's cat. I think I've already told you this, however.

According to one of my favorite physics-major friends, "Nothing bad ever happens to kittens!" So, clearly, you would only have living kittens.

Alas, it seems that the black cats around campus only like Cox.