On a largely left-leaning campus like Oberlin's, it should come as no surprise that the results of Tuesday's election were cause for uproar and celebration. But it was impossible for me to prepare myself for the truly remarkable show of emotion that befell Oberlin in the wake of Barack Obama's historic win.

Election Day morning was met with a fair mingling of hope, anxiety, and trepidation, but surprisingly, most of my day passed uneventfully. I had already voted early in mid-October thanks to a coalition of Oberlin students who made bus transportation available between Oberlin and the Board of Elections weeks before the election. Based on an article in The Plain Dealer, more than 1200 Oberlin students took advantage of these buses that were provided with funding from the college. It was a great, if not laborious, way to spend Yom Kippur, boarding a bus from the parking lot of Mudd library in the early afternoon and returning to campus at about 7pm in time for dinner. I, along with probably over 300 other Obies that day, stood waiting on the front lawn of the Board of Elections, chatting, lounging, playing guitar, singing songs, swinging poi, and of course, eventually making our own marks on history. The notion of bussing students to early vote came about largely because of the drama in 2004 when lines at the two polling locations in Oberlin were jam-packed full of people, some waiting for over 7 hours to cast their ballot. And even despite the bussing efforts, I heard that lines in town were still lengthy, with many Obies griping the wait but simultaneously lauding their contribution to civic duty.

As a result, the majority of Election Day itself had little pull for me. A few of my friends were courageous enough to pull all-day shifts at polling locations, many fluent Spanish-speakers shuttled to other locations where the need for translators was especially dire. Signing myself up on a list of potential pollworkers but never getting a call, I decided to wait it out and try to go about my day as usual. This strategy was largely successful, and it wasn't until 4pm when I was done with classes and work for the day that I really gave it some serious thought. There I was--lying on my bed, waiting for my laundry to finish drying--when a barrage of text messages and emails arrived, alerting me to "low voter turn-out" in Lorain and the need to knock on neighbor's doors, making the last plea for fence-sitters to high-tail it over to their polling locations. Checking my watch, it was 5:00, with a little over two precious hours to go before polls would officially be closed. Mulling over to myself the possibility of throwing on some clothes and rushing out to the Obama headquarters in downtown Oberlin, I surveyed what I had already contributed to the good ol' democratic process: hours of canvassing work with Reclaim Lorain, a non-partisan organization aimed at increasing voter turnout and civic participation in Lorain county, and more than a fair amount of monetary campaign contributions. With that, and Monday evening's four hours of sleep in mind, I decided to take a nap, clear my mind, and let history run its course.

After waking up and eating dinner at the one-and-only Third World Co-op (more on that in a forthcoming entry), I slogged my way over to the library in a vain attempt to do homework and hold drop-in hours as a Peer Career Advisor, one of my campus jobs. Most of that job entails looking over resumes and cover letters and answering any questions that students may have about internship opportunities over Winter Term or the summer. Surprisingly, my plan was more successful than I had envisioned, staving off the huge crowds at the in-library coffee house Azariah's where a big-screen TV was projecting CNN results, and staying wholly encapsulated within a glass-walled room with two large packets of reading in front of me. Of course, at times the screams and jeers got to be too much for me to bear, and had me and other similarly homework-bound students making our way to the television set, asking the usual, "What just happened?!" question, and trekking back to the den of knowledge. With great historic timing and more than a bit of skimming, I finished my readings and my online response minutes before 11pm and was ready to make my way out of the library when I heard a countdown from the coffee house, culminating in an ear-piercing "ONE!" and followed by incredible cheering. I popped my head into Azariah's and read the one-liner on CNN that has now been etched into prophetic lore, "Barack Obama elected president."

I ran as quickly as I could to the 'Sco, knowing that a crowd of students was mounting and knowing that I needed to have a beer in my hand. It is hard for me to describe the atmosphere I witnessed that night, but it was certainly nothing like I had ever experienced before. Surrounded by friends and strangers, new faces and old, it hardly mattered whether you knew the person standing next to you or not--but you were inevitably going to give them a hug. Oberlin has certainly been one of the friendliest places I've ever known, and I more than most mortal beings appreciate a good hug every 20 or 30 minutes (as most of my friends can reluctantly tell you), but this was something different. It was an outpouring of love that was unmistakably raw and palpably beautiful--you could read it on people's faces, emblazoned on their smiles, hanging from around their arms like a banner. It didn't hurt that it was also Motown Night at the 'Sco, a once-monthly jam-session of everything Motown, which could not have been more appropriate for the celebration at hand. Dancing to "September," "Sir Duke," and others, the crowd of what must have been about 400 waited patiently for the speeches to come on the huge projector screen, pulling out chairs, tables, anything, to get a better view. All around, people were tightly knit, dancing freely and unabashedly, screaming and hugging, snaking in and around the crowded 'Sco to find the next person with whom they could share a rendition of surprise, love, and affection. 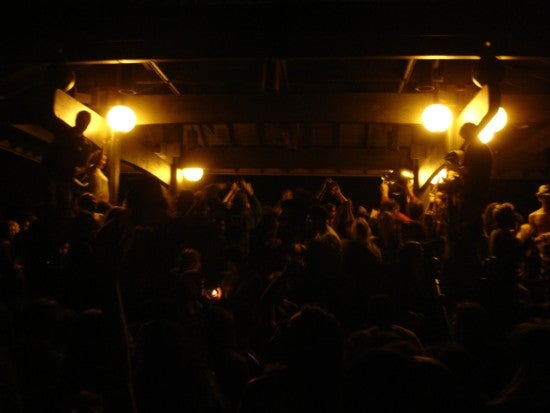 The scene in Tappan Square after both candidates had made their speeches.

After the speeches, there was a mass exodus from the 'Sco and people from all over campus descended on Tappan Square. Even before I got there, a group of students playing jazz instruments were gathered in the middle of the gazebo in Tappan Square, accompanied by a number of others who rendered co-op bowls and serving spoons into makeshift noise-makers. Standing around the back, hearing chants of "U-S-A" and "O-BA-MA!" I thought that I had honestly landed on another planet. There was the sense of a sincere nationalist pride that I had never truly known at Oberlin, a sentiment that I too couldn't stop myself from relishing. It was like a reawakening of the spirit, the culmination of the work of hundreds of individuals who dedicated their time and energy to the campaign. Soaking in every moment of the loud, boisterous, animated, awe-inspiring display, I felt someone to my left turn to me and say, "the way most state colleges go wild after winning a big game, is the way Oberlin celebrates an election." There seemed to be a nakedness of spirit and an unreserved freedom of expression that was incredibly empowering, and I knew that at that moment there was no place on earth I would rather be. Walking back to my room around 2am in a loopy daze and unable to sleep with a mixture of excitement, hope, and wonderment coursing through my veins, I already knew that this night had become one of the defining moments of my Oberlin years.